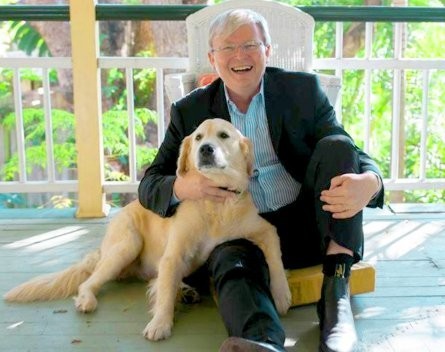 Over the weekend, your humble correspondent went to the local school hall in Parts Unknown and filled in all 97 boxes below the line on the Senate voting form. All while munching down on a freshly baked lamington. A few short hours later, there was a new cavalcade of Canberra clowns to cope with.

Back in June, loyal readers will remember this column suggested getting a bracelet made up reading “WWRD” – for “What Would Rudd Do”.

If you’re ever in doubt, just look at the bracelet and ask yourself what Kevin Rudd would do in any given situation. Then do the exact opposite.

For example, like most political leaders, Kevin Rudd didn’t have the good sense to know when his time was up and retire from politics. Instead, he sulked around the back bench, white-anting Julia Gillard – and the government he once led.

Then he returned to the leadership, only to discover that a house divided against itself can’t stand. Who would have thought?

Well, the lesson from Rudd’s downfall is simple. While selling your business might be a difficult decision to make as a founder, in many businesses, there comes a time when it’s the right thing to do. Make sure you have an exit strategy ahead of time!

Meanwhile, the incoming Abbott government promises to cut red tape for small business. Where have we all heard this before?

It’s funny: Old Taskmaster remembers how Rudd once said the same thing about red tape. And Julia Gillard. And John Howard. And Paul Keating. And Bob Hawke. And Malcolm Fraser.

Strangely, every single time the amount of paperwork seems to have increased. (You know, like that time Howard promised to cut small business paperwork and red tape, then brought in the GST and made everyone get a BAS? Or when Keating did the same thing before bringing in compulsory super instead of the “L.A.W. law tax cut”?)

Well, despite this cynicism about politics, Old Taskmaster says this: Print out a list of the Abbott government’s policies or hold on to a few of their election pamphlets.

That way, in three years’ time, when the regulatory burden remains and the red tape keeps piling up, you can take a look back at their promises to cut red tape and chuckle. Or cry.