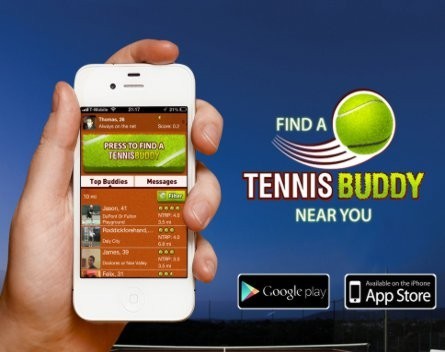 Tennis Buddy an app that promises to help users find a tennis partner in less than 10 minutes is billing itself as “Uber for Tennis”.

Co-founded by Australian-educated entrepreneur Marius Kraemer, Tennis Buddy is a location-based app that enables users to find strangers close by and available to have a game of tennis. The app is available in both Apple’s App Store and Google Play.

“When building Tennis Buddy, I wanted to especially help busy people such as business travellers who often only have a two hour window of spare time that opened up due to a cancelled meeting for instance,’’ he says.

“With a user base of over several hundred users in cities like London, Sydney or even 900 in LA already, the broadcast always finds that one person who is available at that very moment.

“This is what makes Tennis Buddy so fast, as it brings down the average response time for a broadcast to under 10 minutes.”

Kraemer studied a Masters of Information Technology at the University of Sydney, during which he launched his first startup, Matewire, a local events finder which was backed by Australian accelerator Pushstart in 2012.

Kraemer, who was studying in Australia on exchange, struggled to find and market-fit for the product and, coupled with visa troubles, had to shut Matewire down.

His latest effort was co-founded with Sophia Vogt, a former professional tennis player, and together they’re chasing the lucrative US tennis industry.

He says he was inspired by Uber’s ‘get what you want at the press of a button’ mentality.

“By the end of the year, (we) aim to have 500 users in over 100 cities each, so that we can connect people across all the international cities of the world.”