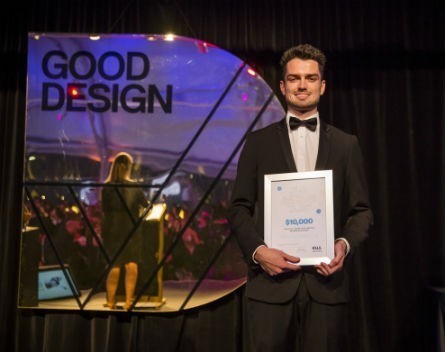 A university student from NSW has been recognised for his efforts in designing a bushfire detection system for residential properties.

Max Glanville, a student at the University of New South Wales, was named the Hills Young Australian Designer of the Year at a ceremony last week for his invention which tracks subtle changes in heat and wind direction.

The aim of Fire Front is to alert home owners about dangerous fire conditions through an app, improving the overall safety of communities that live in fire-prone areas.

Speaking to StartupSmart this morning, Glanville said the house-mounted detection system and corresponding phone app were developed as part of a final project during his last year of university.

“The main thing it’s trying to solve it to have people respond rapidly to an emergency – both the residents and the fire services – to ultimately help residents to confidently make the decision about whether they have to stay or evacuate,” he says.

“A lot of the time people are making the decision too late, but a product like Fire Front could help them make that decision earlier.”

The invention uses thermal imaging cameras and ultrasonic wind sensors in order to provide detailed data to determine if a homeowner should evacuate. However, it will need to be funded and jump regulatory hurdles before it is put into the market.

“All of these detectors will be talking to each other and pretty much be able to estimate the time of arrival of a fire on a property and monitor the random nature of fire, which is really hard to do at a ground level,” he says.

“So it’s trying to give some confidence back to the residents – my whole concept was built around the fact we rely on the fire services to give us information during an emergency but we far outweigh the number of fire-fighters. So why aren’t we the information gatherers?”

Glanville says Fire Front was developed partly because of his own experiences with a bushfire growing up near Canberra.

“It ended up burning half the backyard down,” he says.

“So that was a bit of a wakeup call. And every year bushfires happen and often in the same areas as well, which we can see in the Blue Mountains fires and in Victoria as well. So I thought something has to be done.”

As for whether universities are doing enough to promote entrepreneurship, Glanville says UNSW was a really supportive environment.

“They’ve got a whole innovation and entrepreneurial part of the uni which has really helped me out and helped out other people wanting to get their products to market,” he says.

“I guess uni encourages you to think large because at uni it’s the best time and best experience you can have to push all the boundaries of design, because in the real world you have a strict design brief – you have an opportunity to push the boundaries and this may be your only time to do it.”