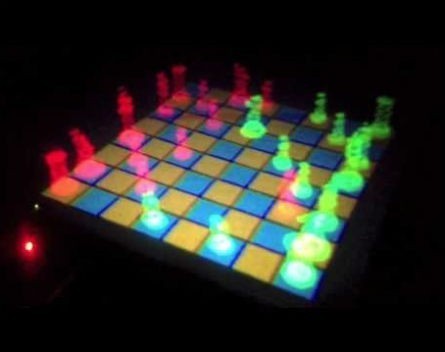 Voxon, which has participated in the 2013 MEGA program, currently has a prototype featured in the WIRED popup store in New York City.

Founder Will Tamblyn describes the Voxiebox Holographic Gaming System as similar to the “holographic battle chess that Chewie and R2D2 play” in the Star Wars films.

The Voxiebox projects a programmable volume of light to produce floating 3D images and animations that can be viewed from any angle without the need for special glasses. Tamblyn says the product has many potential uses.

“There are many potential applications from anything that involves 3D data or 3D visualisations,” he says.

“We can take any 3D data and project that onto the Voxiebox. It could be really useful for anything from mapping to medical imaging to assisting with advanced computational design programs.”

The startup recently won $25,000 from the AMP Foundation’s Tomorrow Fund to fast-track their growth into the commercial sphere. The team’s American arm has also been taking the Voxiebox on a “roadshow” across America – planning to demonstrate their product to everyone from Facebook to NASA.

“It has been a whirlwind,” Tamblyn says.

“It’s all just starting to come together and we’ve worked so hard. It’s exciting to get the validation from some fairly big hitters in the commercial space to say what you’ve got is as awesome as you think it is.”

Tamblyn says the challenge now will be turning the idea into a commercially viable project because it started out as a “fun” idea while drinking beer on a Thursday night.

“The next step form here is to refine the product so that it is manufacturable,” he says.

“At the moment it is designed to be handmade and there’s a lot of effort that goes into building each prototype. But we have a fairly good idea of how to refine it and make it mass producible.”