What happens when a self-driving car meets a road rage driver? 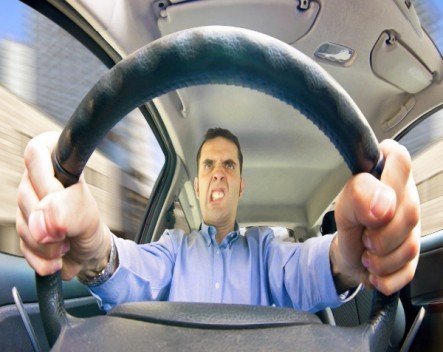 Driverless cars could soon be cruising Australian roads if South Australia gives the go-ahead to reforms to its road legislation.

The technology promises to increase safety on our roads, but what happens when such automated cars meet the less attractive side of human driving: the road rage driver?

Such incidents may be rare on our roads but they do happen, with one Australian expert saying such drivers tend to target “victims they can dominate”.

In the UK, almost half of the 3,000 people surveyed by one insurance company admitted they sometimes acted aggressively behind the wheel. In Canada, up to 80% of drivers admit to road rage behaviour.

Some commentators have flagged road rage and how it relates to the use of self-driving cars as an issue that needs our consideration.

The technology so far

While some states in the USA have already allowed driverless cars on their roads, and the UK has this month begun limited trials of the technology, it may be a while before we see such cars regularly driving themselves along our suburban or city streets.

There is still a lot of work to do to mature the technology to a level where most people would consider it safe enough to mix with the normal traffic.

The big issues include developing systems to deal with inclement weather, improved sensing of pedestrians and bicycles and an ability to deal with other less predictable elements encountered on the road.

But it is the people issues that are likely to be the hardest to overcome, including challenges with ethics, and in particular, the issue of other people deliberately misbehaving around self-driving cars.

Who’s in control of the wheel?

Firstly, the one that most people have witnessed on the TV news, where a competent driver sits behind the wheel and acts as a backup driver to the computer systems that actually performs the task of driving.

Self-driving cars of this type have now been demonstrated by numerous car manufacturers, research labs and of course Google.

There are human issues associated with this type of self-driving car because there is an assumption that the backup driver is paying enough attention to suddenly take over driving and save the day if needed.

If the point of a self-driving car is to let the human “driver” kick back and relax then this assumption is problematic.

There are reports that Google and Uber will compete to create self-driving taxis. A robot taxi will necessarily operate in these two modes.

When you call it from your phone or app, it will drive the streets to you empty, but when it collects you and any other passengers, you can not be expected to take over as a backup driver. Many people catch taxis precisely to avoid the responsibility of driving.

How will other human drivers in their own cars treat these self-driving taxis? I am certain that most people will treat them just like they do current human driven cars, including incidents of road rage.

Until now, road rage has only occurred between people. But what will it mean when a driverless car is driving around empty or with passengers only? Will the rage from a frustrated human driver be eliminated when they see that it was just a machine and not another person that annoyed them (no victim to dominate)?

I have recently glimpsed what it might be like to be a passenger in a self-driving car. And no doubt many of you will have witnessed this too. Most weekends, I spend some time being driven by a brand new driver. My teenage son is learning to drive and it’s my job to teach him.

My car on those weekend afternoons may as well be a self-driving robot car. I am sitting in the passenger seat with no controls. An autonomous, yet not fully competent system – my son – is in full control.

My few hours driving instruction have opened my eyes to the horrible people on the road: those who deliberately abuse learner drivers. There are people who spin their wheels in front of us, who aggressively overtake and who generally show their intolerance towards an imperfect driver.

What will these people do when they come across a self-driving robot car? Will they play reckless games? Will they try and “break” the robots, putting them in difficult and dangerous positions?

Will people hunt empty self-driving cars, spoofing them into driving into the back of a waiting truck and stealing whatever cargo they may be carrying?

As has occurred in the past, we tend to adopt new technologies if the negatives are outweighed by the positives.

Take the smartphone as an example; we have all lost some of our privacy, only to gain enormously from the functions of geolocation and social media. While many predict that driverless cars will ultimately improve road safety we also need to think about the darker side too.

While we consider legislation on how driverless cars work, we also need to think how we deal with those who will abuse the technology. Are new laws needed to deal with reckless or dangerous interference with an autonomous vehicle?

I am sure that robot cars will be part of the future. Will my son have to teach his future children to drive? Maybe. Will he be teaching his future grandchildren? I very much doubt it.

A future with no more L-plates: perhaps. Maybe the only plates to be seen will be H-plates, and they will be to help the robots watch out for us. Warning, human driver at the wheel!