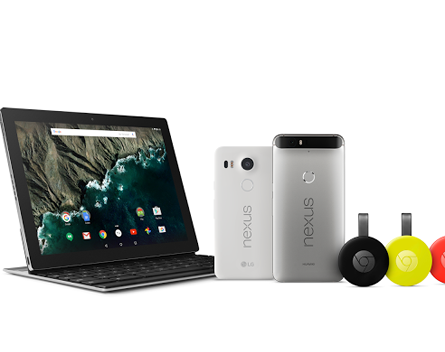 Google has unveiled its latest smartphones and an updated Android operating system at a massive event in the United States one month after announcing its new operating structure.

The product announcement earlier this morning contained few surprises as many details had already been leaked to the media.

However, Google did rock the boat by announcing the arrival of two new Chromecasts instead of simply one revamped version.

The latest product announcements are also aimed at improving connectivity between various Google devices – a trend we’ll be sure to see continue.

“From your watch to your phone to your TV, we want to help you stay connected, entertained and informed across all your screens,” Google said.

Here are three things you need to know about the tech giant’s latest product announcements.

Google is getting serious about streaming

Consumers have been quick to embrace the streaming of television and music thanks to faster internet and the uptake of services such as Netflix and Spotify.

Google is now playing catch-up, as its Chromecast device – similar to Apple TV – has not been upgraded in three years.

While many Google customers knew the Google’s Chromecast would get a facelift, few predicted there would be two varieties.

The new Chromecast, which is priced at $49, is easier to plug into TVs with crowded ports and supports the latest Wi-Fi standards.

However its cousin, Chromecast Audio, is slightly different – this device plugs directly into speakers and allows you to stream music or radio over Wi-Fi.

Google hopes to entice consumers to make the jump to Chromecast Audio with a price point of $35 in Australia, which is lower than most Wi-Fi speakers currently on the market.

Earlier this month, Apple unveiled its new iPhones with vastly more powerful cameras – much to the delight of selfie-takers and amateur photographers everywhere.

Google is determined not to be left behind.

This is a slightly more powerful camera than the latest iPhone models, but a big leap from the previous generation of Apple smartphones, with the iPhone 6 is armed with an eight megapixel camera.

The Nexus 6P is also Google’s first phone with an all-metal body.

The Nexus 5X, meanwhile, is a slightly more compact phone and will cost you around $380.

Google also promises that these phones will charge faster than their predecessors, which is sure to delight time-poor businesspeople everywhere.

Predictions that the Nexus 6P would come in at 5.7 inches in length were also accurate, meaning Google is responding to consumer demand for larger smartphones as we cram more and more of our lives onto our mobile devices.

The Android operating system has been tweaked – but only slightly

Few people were expecting Google to unveil a major overhaul of Android’s operating system and these predictions were right on the money.

After all, 1.4 billion people around the world use Android’s OS every month, so Google must be doing something right.

Instead of major upgrades, Google has opted to improve the Android operating system’s functionality slightly through some nifty, practical features aimed at improving everyday usage.

For example, Android Marshmallow claims to use your phone’s battery power more efficiently, meaning your device won’t be drained by apps you seldom use.

In addition, Marshmallow has embraced fingerprint technology so that users can simply tap their screen in order to unlock their phone and even make purchases on the Google Play store.