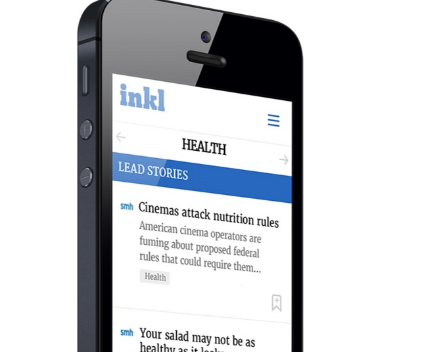 Mishra, a former director of Strategy at Fairfax responsible for building the paywall at The Age and Sydney Morning Herald, founded Inkl to solve one of the news industry’s biggest problems – how to get people to pay for online content. Its news aggregation platform launched in November last year and earlier this week the startup released its iPhone app, a feature heavily request by users.

Inkl allows users to discover content from its partner publications, and gives access to pay-walled content from all of those publications for $15 per month. The revenue is then shared with publishers.

Roughly eight months from launch, Mishra says the amount of users converting from free to paid subscribers is “measures of magnitude” ahead of conversion rates in the media industry and compares favourably to models in similar verticals. Mishra won’t reveal the exact figures, but Spotify, which uses a similar model for music, converts 25% of free users to paid subscribers.

The Fairfax paywall converts just 2% of its readers to paying customers, so if Inkl was able to get a significant number of users and a conversion rate close to that of Spotify, it would be a very welcome additional revenue source for the media industry.

“That validates for us the idea that there’s a niche who believe people won’t pay for news, but will pay for other types of media, it’s not true.”

At launch seven publications signed on board including The Guardian (US, UK and US editions), the Sydney Morning Herald, and the Washington Post.

That number has since grown to 17. Newest additions include The Independent (UK), The Canadian Press, Toronto Star, USA Today, The Atlantic, The Irish Independent, and the Times of India.

“The reaction from publishers so far has been positive,” Mishra says.

“They’re all looking at various distribution channels now. There’s a much broader acceptance of the idea that you’re not necessarily going to drive audience growth through your own property.”