Why the tech revolution could soon be televised: If you develop mobile apps, you must tune in to this 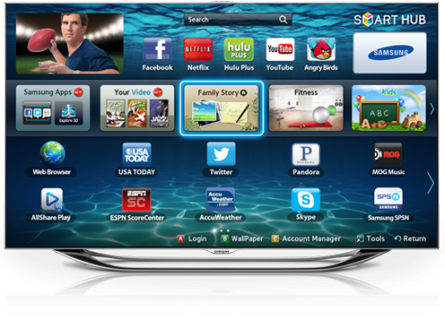 Earlier today, your humble correspondent read a really rather interesting news piece. If you’re in the mobile app business or even a software developer in general, this is one article you must read.

But first, a little background.

If you’re a loyal reader, you might recall back in July your dear Uncle Taskmaster wrote a little article looking at the growing tensions simmering between Google and Samsung. (If you’re a new reader, click here to read it.)

To refresh you memory, the two companies have made a small fortune selling Samsung Galaxy smartphones running Google’s Android operating system and apps. However, now Google (through its wholly owned Motorola Mobility subsidiary) builds its own smartphones. Meanwhile, Samsung has started working on its own smartphone platform in competition to Android, known as Tizen.

At the time, you’ll recall Old Taskmaster wrote the following:

“If you’re already coding mobile apps, and you find yourself with some spare time on your hands, it could be worth playing around with the Tizen development kit. If it flops, you’ll be the coder with the best chess app in a sparsely filled app store.

“Meanwhile, if these two giants of the smartphone world file for divorce, you’ll be well positioned to cash in.”

Then, at the start of August, Old Taskmaster wrote a column about why YouTube video clips matter for small business. Again, click here if you missed it.

Now, dear reader and start-up entrepreneur, here’s where it all starts to get interesting.

According to an article your humble correspondent read earlier today, it appears that smart television will be one of the key focuses of the next version of Google’s Android smartphone platform (Android 4.4 KitKat).

But, loyal reader, here’s something even more interesting:

“Google is set to collide with Samsung over the future of smart TV, with the Korean electronics giant set to use its own operating system – Tizen – to power its future smart TV products from next year.”

That’s right, the likes of Sony and LG will ship TVs next year running Android, while Samsung will ship them with its own Tizen platform installed instead.

Now, my dear app developer, I don’t know about you, but that sounds like a golden opportunity right there.

If I were in your shoes right now, here’s what I would do.

First, download the Tizen development kit and have a play with it if you haven’t already.

Secondly, keep an ear to the ground about any more news that comes out about Android 4.4 KitKat.

Someone could potentially make a lot of money selling apps for smart TVs. As a start-up, you need to be nimble and ready enough to grab that first mover advantage.