Winning BattleHack not as easy as (Raspberry) Pi 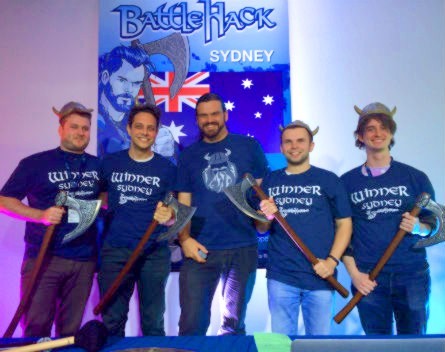 A late night hunt for a replacement Raspberry Pi and a sleepless night led to victory for a team of developers known as Gearbox in PayPal and Braintree’s Sydney BattleHack.

The team won the 24-hour hackathon with an Internet of Things solution that allows users to open a secure box, which would be placed in public parks and enable access to sports equipment that could be paid for using PayPal.

The team cooked the Raspberry Pi they were using during the hack, which sparked a frantic online search for a replacement.

A shout out on social media found an eBay seller willing to meet them late on Saturday night and the project was saved.

#GearBox just blew a @Raspberry_Pi at the @PayPalDev #battlehack in Sydney. Can anyone locally sell us one?

The senior global director of the PayPal and Braintree Developer Network, John Lunn, who was also one of the competition judges, chuckles when recalling the team’s frantic search, but says it’s all part and parcel of a hackathon.

“We had some dramas, but we had a fun time,” he says with a laugh.

BattleHack Sydney is one of 14 BattleHacks around the globe and the Gearbox team will now be flown to San Francisco to compete in the BattleHack World Finals in November with a $US100,000 prize up for grabs.

It’s the second year BattleHack has been running, but the first time it’s visited Australia, and Lunn says the Gearbox team should have a good chance in the world finals.

“We didn’t know what to expect, but were happy to get the a variety of different people, from young university students to more senior people from university, people that worked corporate jobs at large companies in Sydney and people who were working on their own startups,” he says.

“The quality was fine. We had a nice mixture of hardware and software and a good completion rate, the hacks we saw were finished.”

Midnight is here and so are many of the hackers #BattleHack #Sydney 13hrs to go. pic.twitter.com/KotmO7r0qi

BattleHack teams were tasked with coming up with a solution to a local problem that would make their city a better place to live, using a mobile application that incorporates PayPal or Braintree.

Lunn says there was a great mix of ideas, including a number of which aimed to help the homeless, one of which looked at how homeless people could take donations once the world moves away from physical money, while others dealt with street art and crowdfunding.

“I am so pleased we could bring BattleHack to Australia this year to give Aussie developers a chance to show off their skills,” he says.

“The creativity and quality of code we saw proved that Australia has world-class developer talent.”