With HoloLens, the future of reality is augmented 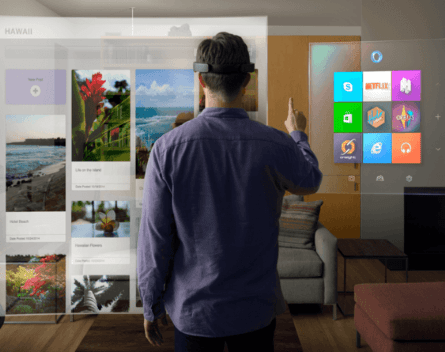 Prepare to open your wallets, ladies and gentlemen: Microsoft has announced the release of an augmented reality (AR) headset called HoloLens.

Although having been announced only a fortnight ago, tech media are already dreaming feverishly of the potential applications for such a device. Meanwhile, Microsoft’s own press images seem to promise a benign utopia replete with living room Minecraft games and attractive, tech-savvy white people.

It might look rather like an excitingly chunky pair of wrap-around sunglasses, but Microsoft promises that it is entirely self-contained, with speakers, lens and CPU housed entirely within the chassis.

Being substantially smaller than the Oculus Rift, and intended to be less invasive than Google’s much-maligned Glass, HoloLens provides perhaps the most credible attempt to introduce augmented reality into our homes.

What is augmented reality anyway?

Even though HoloLens is new, the idea of augmented reality is certainly not. First proposed by L. Frank Baum (author of the Wizard of Oz) in his 1901 novel The Master Key, AR has a long and illustrious history, at least in theory. But what is it, exactly?

Augmented reality is a form of “mediated perception”: an AR device overlays a virtual world on the real one. It does this by taking a live video feed of the external world and then supplementing it with computer-generated sensory input. In this sense, it is unlike virtual reality, which entirely replaces the external world with a virtual one. Instead, AR embellishes the real world to make it more fun, clear or informative.

Already there is a huge number of AR apps, most of which have been built for mobile devices. One such is Layar, which synchronises camera input with data from Google Maps in order to let you see the world with the digital marginalia built in.

Meanwhile, games like Ingress enable smartphone users to win points and compete with other players by “hacking” with virtual nodes that are attached to real-world landmarks. In order to hack the node, they need to actually stand near the landmark, giving it a distinctly physical dimension.

Some of these AR programs are genuinely remarkable, and carry with them the seeds of a changing paradigm. The new version of Google Translate, for example, can perform real-time spoken-word translation, as well as translating written words almost instantaneously. The Babel fish from The Hitchhiker’s Guide to the Galaxy gets one step closer.

However, HoloLens provides you with something a little different. Unlike mobile phone apps and Google Glass, the sensory overlays provided by HoloLens are interactable digital objects. They don’t merely provide parenthetical or additional information about things in the world; instead, those objects serve to further populate the world around us.

The futures of where we live and work

If you’re interested in Microsoft’s vision of a future filled with digital objects then check out its publicity video: the promises may seem overwhelming (one might even say “unbelieveable”). According to Microsoft, with a liberal application of augmented reality, the home and office become deeply and richly interactive in a way that has been hitherto impossible.

Objects are designed and tested on the fly. A single pinched finger or flicked wrist enlarges or crumples or dismisses instantly and organically. Meanwhile, entire classes of consumer items are rendered completely redundant, collapsed into HoloLens and products like it.

If Microsoft realises the future it proposes, AR products will see televisions, gaming systems, music players, desktop computers and even cosmetic objects like wall art and decorative carpets consigned to the dustbin of history. We will no longer have a need for these physical objects; instead, they will be projected into our field of perception as strictly digital entities.

To be clear: this is not a prediction on my part. Far be it from me to make predictions about the purchasing habits of other people (I can barely keep track of my own). This, however, appears to be Microsoft’s vision. Although varnished into a high gloss, what is perhaps most telling about its vision of the future is not what isnew, but more what is missing. Televisions, gaming consoles, paintings: these objects have no place in Microsoft’s future.

The future of consumption

If this outcome is realised, it seems obvious to expect radical shifts in manufacturing and other secondary industries. Already there have been murmurs of concern and excitement about the possible economic ramifications of cheap 3D printing, particularly with regards to what it means for the manufacture of simple items.

If Microsoft is successful in killing off the television and other media apparatuses, we may well also see manufacturing shrink from the other end. If the HoloLens and products like it do supplant other consumer electronics, we will be witness to the slow, awful collapse of what is currently a highly speciated consumer landscape into a homogeneous field of kooky-looking headsets.

However, even as manufacturing will be forced to grapple with greater decentralisation and greater automation, not to mention potential market erosion at both the top and bottom ends of the sector, those who create, market and sell entertainment content will almost certainly find AR technologies an enormous boon.

Marketers and content producers will have a window into our habits and tastes, sharing material funded by consumer commitment to almost-negligible microtransactions.

Meanwhile, consumers will almost certainly fight back. Already a great many web browsers come installed with native ad and pop-up blockers. Moreover, having tired of product placement in movies and the indignity of “advertorials” in magazines, several designers and developers are working on products that block ads in the real world. It seems fair to expect that this presages a subtle, extremely sophisticated arms race between those who consume content and those who produce it.

The sky is not falling

These developments might sound like the first stages of a miserable Gibsonian future, but there’s no need to panic just yet.

Indeed, there’s plenty of reason to think that the widespread uptake of AR technologies will, on the whole, make life easier. However, just like the internet dramatically changed the way business is conducted (such as the slow demise of brick-and-mortar bookstores), it seems reasonable to expect that the spread of AR technologies will introduce its own difficulties. But we should not take our own predictions too seriously.

After all, we’ve been privy to these kinds of statements before. People who visited Norman Bel Geddes’ Futurama exhibit at the New York World’s Fair in 1939 were awarded a souvenir pin upon departure: “I have seen the future”.

Now, with the benefit of hindsight, we can look back upon this claim, along with some of the more outlandish predictions made by our forebears (flying cars, robot servants, Jetsonian spaceflight, post-scarcity economics) with an indulgent smirk: chrome, finned cars and bakelite have swung seamlessly into fashionably kitsch; ill-fated relics of a future that never was.

There is, of course, a lesson here. In our own era of social networking, genetically modified foodstuffs and tawdry capitalism, it behoves us to be a little cynical about the promises and drawbacks of an augmented reality, in much the same way that we mock the promises of the Atomic Era.

Of course, I’d be lying if I said I weren’t excited. I am, and very much. There’s too much of the techno-utopian in me not to feel a subtle thrill that the future we’ve been promised is finally arriving.

But nonetheless, I worry, and I reserve judgement. Not very much, granted, and not very loudly, but amid the excitement there is a subtle sense of disquiet, and the sly hint of a disdainful sneer.