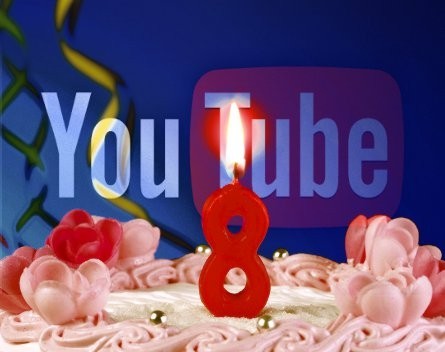 Video-sharing website YouTube has celebrated its eighth birthday by revealing more than 100 hours of video are uploaded to the website every minute, highlighting its incredible growth.

YouTube, which launched in May 2005 and was acquired by Google in October 2006, was created by former PayPal employees Chad Hurley, Steve Chen and Jawed Karim.

“When YouTube’s site first launched in May 2005, we never could have imagined the endless ways in which you would inspire, inform and entertain us every day,” the company write in its blog, to mark its eighth birthday.

“Today, more than 100 hours of video are uploaded to YouTube every minute. That’s more than four days of video uploaded each minute!

“Every month, more than one billion people come to YouTube… That’s almost one out of every two people on the internet.”

The YouTube Partner Program provides creators with resources and opportunities to improve their skills, build their fan bases and earn more money.

In essence, YouTube shares advertising profiles with the owners of the most-watched clips in return for posting advertisements alongside them.

“More and more big advertisers are looking for these stars because they’ve very credible,” Google spokesperson Henning Dorstewitz has said.

“They have a steady output of videos so they have a fan community… and when they become a partner, we run ads next to their videos and we share this ad revenue with them.”

In June 2011, Google Australia unveiled plans to add more original content to YouTube in a bid to appeal to marketers’ rising interest in online video advertisements.

“To get more revenue, YouTube needs more content. We need to figure out what it is that users want more of and then find a way to give it to them,” Google’s Nick Leeder said in a statement at the time.

“A lot of the content people look at on YouTube is short-form. Is that the nature of YouTube or can we run long-form video on it?”

It’s been reported Google’s head office in the United States plans to spend $US100 million on original content for 20 new channels on YouTube.

Leeder said while Google Australia is unlikely to invest in original video content, he “wouldn’t rule it out”.

YouTube Analytics promises to make every creator smarter and more strategic with the videos they produce by providing data and insights about their content, audience and programming.

Every section of the Creator Playbook includes an analytics tip to help creators use the tool to assess the impact of changes implemented.

In mid October 2012, Google released more analytics features for YouTube. The new features include the ability to see how many people are getting rid of “annotations”, which are messages that appear on the screen.

YouTube Analytics can also show how many people stop watching a video within a matter of seconds.

In late October 2012, YouTube launched InVideo Programming – a new way for creators to promote their videos and channels in order to grow their audience.

According to YouTube product manager Michael Rucker, InVideo Programming allows users to feature a video across their entire video library.

“In addition to featuring videos, you can also promote your channel branding. If you change your branding in the future, you can replace it with a single update,” he wrote in the company’s blog.

“InVideo Programming travels with your videos wherever Video Annotations are available.”

The Annotations Editor is a tool that lets creators layer text, hotspots and links over their video, designed to enrich the experience with information and interactivity.

Rucker said if you are a creator “in good standing”, you should be able to access InVideo Programming in your Channel Settings.

John Cross of Recycling Solutions, which won Best Green Start-up at the 2012 StartupSmart Awards, says he was able to secure distributors from around the world thanks to YouTube.

“I did a YouTube video and got emails from all over the world. People loved the product and wanted to distribute it,” Cross told StartupSmart in February.

“I’ve got distributors in Israel and South America waiting for the product… [and] I’m getting a lot of interest from the US, and Asia and Europe as well.”