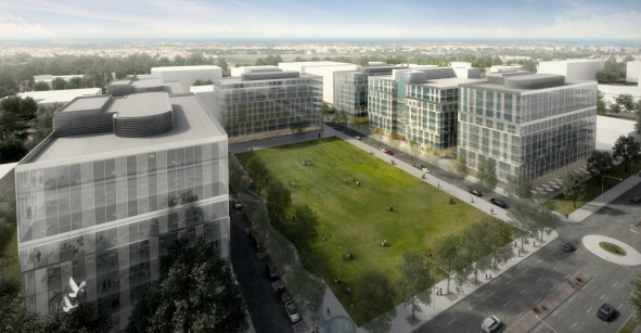 Macquarie Park is set to be transformed into an innovation district as part of a multimillion-dollar redevelopment plan to attract more startups and entrepreneurs to the area.

The 350 hectare business park 12 kilometres from the Sydney CBD will be turned into the Macquarie Park Innovation District as part of a new partnership between large corporates in the area including Optus, NAB and AMP Capital, along with Macquarie University.

The district will play home to over 180 multinationals and 200 SMEs, with 85,000 employees and students and a teaching hospital, with the office space on offer to be expanded to 2 million metres squared.

The aim is to create an innovation district that is one of the best in the world, Macquarie University deputy chancellor David Wilkinson says.

“Our aspiration is to be world-class,” Wilkinson tells StartupSmart.

“If you’re going to do this you have to do it as best as you possibly can. We’ve had a look at a lot of these places around the world and we’re absolutely convinced we can make this an innovation district that is seen as truly world-class.

“There’s no doubt in my mind.”

With the foundations already in place in Macquarie Park, Wilkinson says the process of transforming it into an innovation district centres on fostering collaboration and putting the structures in place to attract early-stage startups.

“It’s a shift from what is at the moment a very big, very effective business park with lots of companies working in isolation into a successful innovation district,” he says.

“We will see a massive uplift in collaboration, much improved connections between different parts of the park and that will trigger the startups and the environment for real innovation.

“Our primary job is to make the connections to enable collaboration. That’s what everyone wants to do and our job is to lead and facilitate that.”

The Macquarie Park business district already generates $9.8 billion in GDP annually and is growing at 7% yearly but it isn’t currently viewed as an attractive destination for startups, he says.

“At the moment as a startup you wouldn’t think of Macquarie Park,” Wilkinson says.

“It is seen as a place where established multinationals are, there really isn’t much, if any, physical office space, labs or co-working spaces. It’s not a natural go-to at the moment.

“And there hasn’t been much innovation and incubation programming. We want to change both of those things.”

The Macquarie Park Innovation District will offer a range of on and off-campus co-working space as well as incubation programs, with a focus on investing in this infrastructure over the next five years.

“We do have space for startups on university campus, it’s just not widely known,” Wilkinson says.

“We’re building that capacity and we’re very interested in creating an offering for startups on campus.

“That’s where the opportunity sits, with the space and programming that startups want so that they can say, ‘let’s go to Macquarie Park’.”

The transformation of the park will take place across a 10-year timeframe, and include short-term projects like building refurbishments and incubator programs along with longer-term redevelopments, Wilkinson says.

“It’s a mixture of everything from now all the way through to 10 years’ time,” he says.

“We can respond to the opportunities immediately but we also have a capital development plan for the campus for the next 10 years.”

He says a core part of designing the district involved studying world-leading innovation areas from around the world and drawing on what they do best.

“If you’re really going to be successful at scale you need to create the entire ecosystem that startups needs, you can’t just do bits and pieces,” Wilkinson says.

“The great thing about Macquarie Park is that the scale is there, the issue is how we complete the full ecosystem. We need the incubator space and programs that will attract the startups and VCs.

“My focus at the strategic level is pulling together all of the components of a complete ecosystem. Once you’ve got the ecosystem in place you can’t run it, you’ve got to just let them go.”