If it’s felt like a whirlwind start to 2018 in terms of funding activity in Australia’s startup ecosystem, that’s because it has been.

A new tranche of data from big four accountant KMPG’s quarterly Venture Pulse report shows the first quarter of 2018 was the second highest ever for venture capital funding globally, with startups across the world pulling in a whopping $US49.3 billion ($63.4 billion) in VC funding.

This significant amount is impressive considering the volume of deals has continued to decline. This falls in line with Venture Pulse data from previous years, which shows the number of deals globally has started to significantly drop since peaking in 2015. 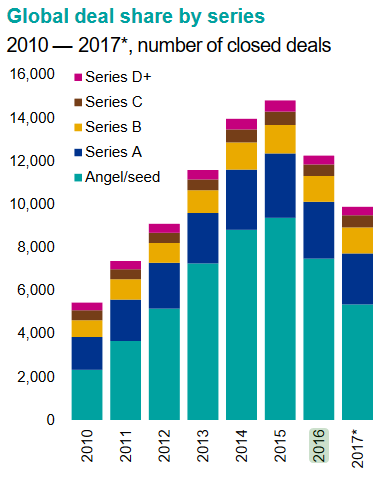 For the Australian scene specifically, KMPG reports the investment by venture capital firms reached $US130.5 million ($167 million) in the first three months of the year across 16 different transactions.

“Australian startups continue to attract increasing levels of commitment, both from local and international investors, with larger investment rounds reflecting the ambitions and capabilities of these startups to expand into global businesses”, Amanda Price, head of KPMG High Growth Ventures in Australia, said in a statement.

“Recent fundraising by Australian venture capital funds … [means] there is more money on the table than ever before for our startup founders.”

This falls in line with what StartupSmart had noticed independently, as the weeks leading up to March were a veritable cornucopia of startup funding. In that week alone, $85 million worth of funding (though not all of that was venture capital) was dished out to startups.

But there have also been some notable, smaller raises for up and coming startups, such as cybersecurity startup Kasada raising $2.5 million, and healthcare app Tyde raising $3 million. And if you were to throw initial coin offerings into the mix, a further $60 million in funding would be revealed, thanks to success stories such as Havven and CanYa.

But could there be another reason for the first quarter of 2018 being a boon for startup funding, other than just strong startups luring in eager investors? KMPG High Growth Ventures entrepreneur-in-residence Alan Jones thinks so, laying the blame on Aussie investors’ penchant for a good skiing holiday over summer.

“In my experience, the extended summer vacation period in Australia has a dampening effect on investor activity. Summer is a time for renewing business relationships over lunch, or taking time out to thank investors, shareholders, customers and staff,” Jones told StartupSmart last week.

“If you’re trying to raise a round in the last few months of the year it can be hard to get people to commit because they don’t want to hand over the money just before everything shuts down for the summer — they want to have their money working hard from day one.”