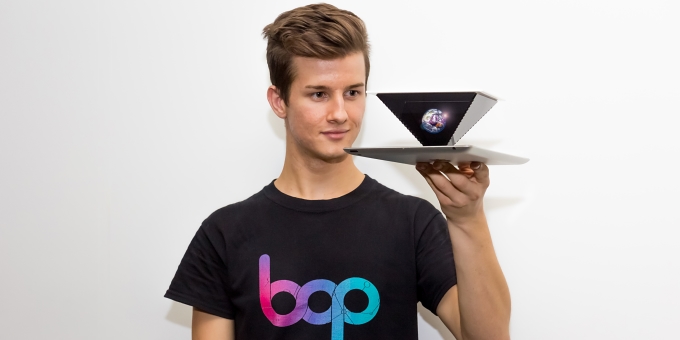 An 18-year-old entrepreneur with a three-year-old startup is part of the latest 10-strong cohort of startups accepted into the Queensland University of Technology’s creative tech Collider accelerator.

Headed up by prominent Australian investor and startup figure Alan Jones, Collider takes the 10 startups on a three-month coaching and workshops program, and provides them a seed investment of $30,000.

One such startup in the augmented reality space is BOP Industries, founded by 18-year-old recent high-school graduate Scott Millar and born out of a grade nine business project.

BOP is a mediatech company focusing on a unique but growing part of visual entertainment: holograms. The startup creates holographic projections a la Star Wars for companies across an array of different industries, including marketing, education, and advertising.

The startup uses iPhones and iPads as the hardware base, projecting small floating images above the screens. Its tech has come a long way from Millar’s grade nine project, which used CD cases to create rudimentary hologram displays.

“Our objective is to make the tech simple and easy to use. There’s a lot of solutions on the market for hologram tech, but what we’ve found is our competitors’ tech is really hard to use and expensive,” Millar told StartupSmart.

The company started off selling the tech on eBay and Etsy to local companies and individuals, but before long demand was skyrocketing.

“I was sitting with one of the biggest marketing companies in Brisbane and they were asking me for 200,000 of the devices for an event next week,” Millar laughs.

“It was at that point, being grilled on my supply chain, I realised there was serious demand for this new and exciting tech in a simple and easy to use way.”

BOP no longer sells just on eBay and Etsy, and is selling to customers across the country with enquiries rolling in from Europe and the US.

While that might sound like a dream for such a young startup and founder, Millar says the number one thing he’s hoping to get out of Collider is help with scaling. BOP’s growth in recent times has been natural, but extremely rapid.

“It’s my and my team’s first startup so we’re still learning as we’re going. While we still had processes and systems in place to help us scale, I’m hoping Collider will teach us how to scale a lot more smoothly, and build a really scalable business,” he says.

Part of that scaling may or may not include a funding round, says Millar, who notes the multiple opinions about the right time for startups to accept funding, and says it’s something he’s thinking about.

Having just recently graduated high school, Millar says he made the difficult decision to defer an offer of a place in a bachelor of business degree at a local university. While he says studying business is the “done thing”, he views the experience he’s gaining at BOP as more valuable for the time being.

“I want to keep learning as I’ve always craved constant learning. The accelerator is the practical next step, and gives me instant learning that I wouldn’t get out of a textbook,” he says.

Millar says he’s never let his age get in the way of running his business, using it instead as a way to be “really naive” and ask a lot of questions. A favourite tactic of his is to post a question on his LinkedIn where he gets a “swamp” of responses.

“The industry is really warm and welcoming, I was afraid they’d look at me as just some kid,” he says.

For other young entrepreneurs, Millar says the best thing you can do is ask.

“Don’t be afraid to ask people for help, there’s so many fantastic mentors out there who will be willing to help you out. And don’t be afraid to show your age and use it to your advantage, it’s okay to not know things,” he says.

“Just get out there and start something.”

The other startups in the Collider program include: