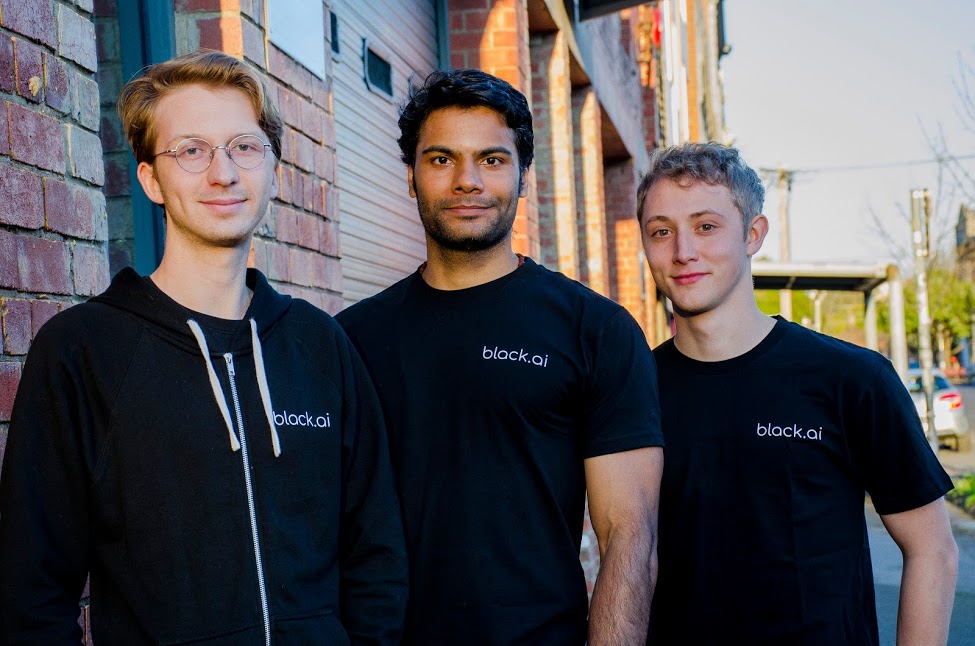 Black.ai has raised $1.2 million in seed funding to develop and deploy its robotics and artificial intelligence solution into Australian supermarkets — but the startup has ambitions that stretch much further than the fresh foods section.

If focuses on “taking bots out of assembly lines”, getting them into less predictable environments such as city streets or construction sites, Okkonen tells StartupSmart.

The founders have big ambitions, but for now, the startup is focused on the supermarket scene. It’s currently in partnership talks with a major supermarket chain in Australia, although until the deal is finalised Okkonen declines to share which one.

The sensor system means shoppers can be tracked from the moment they enter the store, with 3D depth sensors recognising movement, and observing which items shoppers pick up or put down.

When the shopper gets to the checkout, if they mistakenly select the wrong item, the machine will remind them — and Okkonen stresses it does this politely — which product they actually picked up.

“I don’t think the majority of people are malicious … I think people are lazy,” he says.

“People don’t know which type of tomato they picked up.”

That said, between 3% and 8% of all fresh food produce rung through self-checkouts are incorrect, Okkonen says, and the trend swings dramatically towards the cheaper items.

Through preventing theft — accidental or otherwise — and helping stores manage their stocktake, Black.ai’s technology could save supermarkets between $400,000 and $600,000 every year, Okkonen says.

But the supermarket technology is just one part of the Black.ai’s activity; in the future, there will be more applications for the technology.

For robots to be able to function in public spaces they have to have “richer information about what’s happening”, he says.

Black.ai is building a sensor infrastructure allowing bots to plug in a share data, meaning each bot can build up a picture of things they can’t themselves sense.

“When demand for applications picks up, we’re definitely positioned to capture that market,” he adds.

Black.ai wants to compete with the Amazon Go store technology, and with Google’s robotic automation technology.

“We’re in a race,” Okkonen says. “We’re chasing a market that’s three years away. We still need to make progress today,” he adds.

The funding will go towards hiring more staff, building more quickly and working on scaling and deploying applications of the technology, as well as testing new technologies.

Okkenen admits the startup is “not focused too much on commercialisation”, calling that “a bit of a distraction”. And he wanted to work with investors who understood that attitude, and the bigger vision.

The investors the team got on board are aligned with that, Okkonen said, and in particular having William Tunstall-Pedoe on board is a validation.

“For him to be impressed enough to throw his wallet at it is a really big deal,” he says.

Black.ai is in Tunstall-Pedoe’s core area of expertise, and the startup marks his first Australian investment. He allowed other investors to understand the potential value of the business, which “definitely helps in raising”.

When it comes to advice for startup founders, Okkonen notes when your business is different to a lot of others, “a lot of the traditional startup advice doesn’t necessarily apply”.

“We have had to have the confidence to back ourselves,” he says.

Having said that, Okkonen also advises founders to expose themselves to as much knowledge as possible, securing good mentors and networks. You don’t have to listen to it all.

“The best mentors and the people you really want to listen to understand there’s a time you’re not going to listen to what they have to say,” he says.

Even if he’s heard all the advice telling him to go in one direction, and he goes in the other, it means “I know why I have done things that way”, he adds.

NOW READ: An evolving AI retail experience: Why buying groceries will never be the same