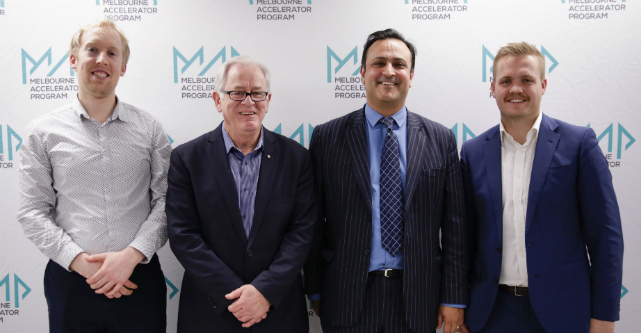 An Australian medtech startup has entered a four-month accelerator in one of the world’s largest medical centres, after completing the Melbourne Accelerator Program and raising $1 million in 2016.

The Texas Medical Centre in the US spans over 4.6 million square metres, with over 9000 beds across several facilities and 10 million patient encounters a year. Nearly $4 billion ($US3 billion) in construction is underway to further develop the precinct.

Just 25 startups and medtech ventures are accepted into its four-month accelerator program TMCx.

CNSDose, founded by chief executive Ajeet Singh and Dr Harris Eyre, is the youngest medtech venture to be selected from Australia to join the accelerator’s current cohort. Ward Medication, founded by Sue Ward in 1997, and Adelaide-based Personify Care, launched in 2014, were also accepted.

“We have a technology, which is a DNA test or genetic test, which guides people’s anti-depression treatment,” Eyre tells StartupSmart from Texas.

With data taken from a cheek swab, CNSDose analyses patients’ brains and livers to determine what treatment would be best for the person experiencing depression. Because just half of the people on antidepressants get better, Eyre says, it’s crucial that there are better diagnostic tools to ensure patients are set on the right track with treatment.

“Our goal is to maintain ourselves as the leaders in the genetic guidance of anti-depression treatment,” says Eyre.

In the hopes of making CNSDose available across Australia, the US and Asia, Eyre believes entering a world-class health district imbued in innovation and boasting more than 20 hospitals is an important step forward for the new startup.

“It’s not just a precinct but it’s actually a city,” he says.

“With that you have a lot of opportunities as an early-stage medical technology company.

“The Texas Medical Centre also has access to really great mentors, which they access from all over the US.”

Eyre and his team soft launched CNSDose in the US earlier this year. They’re running trials with institutions such as University of California Los Angeles (UCLA) and prominent psychiatric hospital The Menninger Clinic.

“We’ve been offering the technology for the past two months in a very measured way to make sure we’re getting feedback from patients, doctors and labs that all of the systems and processes are running well,” he says.

Participating in the TMCx accelerator over the coming months will give Eyre and his team exposure and training with industry experts, as well as pro bono legal advice and access to high net worth individuals and venture capital firms for investment opportunities.

“They help us to get introductions into hospitals,” he says.

“They essentially hold your hand and walk you up to [meet] medical directors and CEOs.”

For now, Eyre will split his team of 10 employees between the US and Australia until the business is in a position to expand into more markets.

“There’s this big need for improved mental health services in the Asia region,” he says.

In the future, he says, they’ll work on expanding CNSDose’s technology for the treatment of other mental health illnesses like Alzheimer’s and Attention Deficit Hyperactivity Disorder (ADHD).

“We’re the most promising technology [in this] field,” he says.

Editing your personal statement for university submission is often difficult. This article is a practical guide packed with inspirational and easy to follow advice on how to edit a personal statement – this article will tell you everything you need to know, regarding editing and building tension in your writing. read more.

Professional organizations are important in every field, especially health care. Learn what organizations exist to help dialysis technicians network and remain abreast of the latest nephrology news.check it