Melbourne startup Everywhere Roadie heads to SXSW with its plan to help musicians rent equipment any time, any place 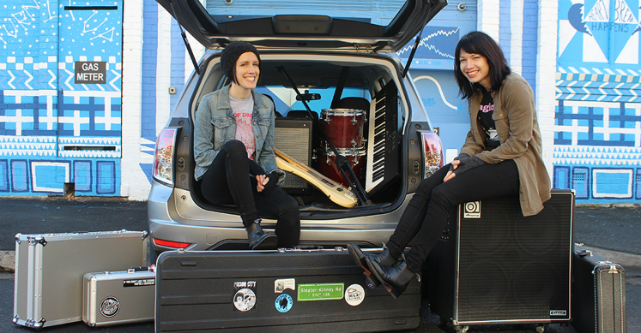 A Melbourne startup that aims to help independent artists access and share equipment has been selected to feature at South by Southwest in Austin, Texas, this March.

Everywhere Roadie founders Liz Thomas and Kate Bradley say they were “ecstatic” when they got the call advising them they’d be one of the few startups worldwide to be chosen.

Then the weight of the excitement sunk in.

“The two of us have got a lot to do,” Thomas tells StartupSmart.

With the catchphrase “travel light, gig right”, Everywhere Roadie is a peer-to-peer marketplace for artists to rent all sorts of production and music equipment from each other. It’s aim is to make international and nationwide touring more accessible for artists.

“We really want to see a service that could be global that’s going to help musicians to tour the land … in a way they can actually save some money and make some money when they’re on the road,” Bradley tells StartupSmart.

The startup also donates part of its profits to the Support Act program, which helps empower professional artists and musicians affected by hardship or crisis to continue their work.

“At the core of it is having this big global community,” says Thomas.

Born out of frustration

The duo, who also manage their “nine to five” with live music gigs, says they decided to create the startup as a solution for independent artists who often need a “fortune” to pay for equipment during tours and recording sessions.

It’s something the founders experienced first-hand.

“[Everywhere Roadie] was born out of frustration … we were coming back in deficits and it was becoming really inaccessible to tour,” says Thomas.

Since launching in June 2016, Everywhere Roadie has grown organically to 500 members in Australia, the US and UK.

Bradley, who has a tech background, says the market opportunity in Australia alone is significant.

“We think the market opportunity is probably up to about 1 million people—there’s 30- to 40,000 registered full-time musicians [and] we know there are a lot of musicians like us who have careers and other jobs,” says Bradley.

Before launching last year, Bradley says the pair had spent months conceiving the idea and released a minimum viable product (MVP) to gauge interest from their target market.

“We started with a little event post on Facebook and it just went from there,” says Bradley.

“We have licensed something at this stage and are in the process of wanting to build on to that. We own all the IP [and] we’ve got a full product roadmap.”

Development so far has been self-funded.

“We are interested in accelerator programs so we’re having a look locally and globally,” says Bradley.

“We’re keen to work with other people to expand the business.

“Liz and I are both independent musicians so we’ve had a life of self-funding lots of things. I also work in IT and we’ve raised money through our own hard work to get this off the ground.”