Already a seasoned entrepreneur, Mod studios founder Michela Ledwidge has now built a brand new kind of storytelling software — a VR platform giving users the chance to delve into stats and create their own DIY documentary.

The new tech, Grapho, debuted last month at the SIGGRAPH Asia 2019 computer graphics conference in Brisbane. The interactive doco, A Clever Label, explores the relationship between the Australian Christian Lobby and the queer community in Australia, as well as the role the press plays in that discourse.

Ledwidge herself is “one of the original web generation”, she tells StartupSmart.

She did a BA majoring in computer science in the 90s, and then “rode the dot-com years as a gun for hire, working on some of the largest internet productions in Europe”.

For the past 15 years, she’s been an entrepreneur, exploring new and innovative ways of storytelling through interactive media.

Now, she’s created Grapho as a spin-out from Mod, and used the new tech to create what she describes as “an interactive Four Corners episode”.

It’s not exactly a happy feel-good project, “but we’ve wrapped it in this pretty amazing tech”, Ledwidge says.

“We’re here because the interactive experience we’ve designed for the documentary is … a pioneering approach to documentary making.”

This is a good example of technology being used to foster good. But, that wasn’t the whole purpose behind this project, Ledwidge says.

Rather, she wanted to tell a story and explore a tricky topic. And to do it in a way that would work best, she had to create some tech.

“The question was, who are the Australian Christian Lobby, and who are these groups that are fighting so hard and putting so much resource into making life harder for LGBTQI people in Australia?

“Are they really that representative of the population as they claim to be?

“Are they really representative of all Australian Christians?

“You look at the data — and actually, not at all,” she says. 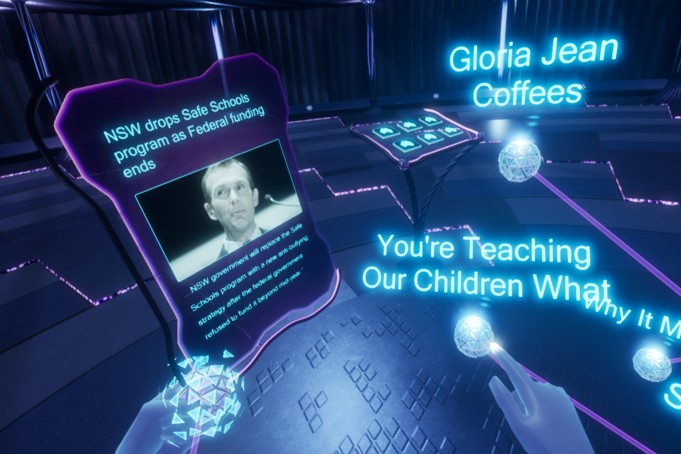 Inside a Grapho doco.

Grapho was built to tell this story, but the applications could go much further. At its core, it’s just a new way of getting information across.

“Al Gore won an Oscar for a project that started as a PowerPoint presentation,” Ledwidge notes.

“What if we had a virtual world where the presenter and audience could interact with real-time data?”

There are data visualisation tools on the market, but they’re generally too complicated for average people to understand.

For Ledwidge, all she’s ever trying to do is create an experience.

Sometimes that can be done with off-the-shelf tools. Sometimes — actually, often, in her case — it requires at least some degree of invention.

“In order to make what you see the presenter doing on the screen, we had to invent processes and technologies that didn’t exist.”

A case for commercialisation?

The whole setup has to work like a video game. While Ledwidge showed graphics capabilities by presenting within it, anyone could jump in and essentially become the presenter of their own documentary, she explains.

“We live in the age of filter bubbles, soundbites, selfies,” she explains.

“How are we going to deal with complex data? Is it just people like Trump yelling ‘fake news’? Is it just leaving things to the loudest voice?

“Or are there opportunities for us to look at data in ways that are supported by some of these new technologies?” she asks.

While most of the data is available in the public sphere, people typically don’t aggregate it themselves, or even actively seek it out.

“That kind of information is quite engaging, to be able to actually follow the money.”

But, as to whether it will help people to engage with the facts, rather than the headlines, she’s not sure.

Some people are just drawn to experiential working and mapping, she says. This will likely resonate with them.

But for those who are comfortable with traditional media, this isn’t likely to replace it.

“The actual commercialising of this will come if the majority of the population is drawn to this,” she says.

“I honestly don’t know if that will be the case.”

But she sees herself as an inventor and an innovator, and as far as she’s concerned, Grapho fills a gap in the market “from a storytelling and presentation perspective”, she says.

“There’s a gap in the market between technical visualisation tools designed for experts and scientists, and they’re really complex. But people have forgotten that if they don’t have a simple way of presenting that data, then what’s the point?”

Now Grapho has made its grand debut, Ledwidge is considering spinning it out of the studio as its own product.

“It feels like the right time to explore … there are next to no VR productivity tools out there,” she says.

“This is our first step towards putting out that story.”

While she would like to secure some investment to help Grapho reach its full potential, she will also keep plugging away and bootstrapping it in the background.

Mod may be a well-established business in itself, but “Australia doesn’t have a great reputation for investing in stuff”.

“We’re not putting our studio on hold to pursue Grapho. We’re just putting it out there, and hope the right investors will see potential in it.”