The obstacles stopping US startups from bidding on government contracts

As the Australian Government moves to increase startup and SME involvement in its annual $6.5 billion information and communication technology contracts by 10%, new research by Boston Consulting Group identifies the barriers for startups looking to work with the US Government.

Startups are revolutionising nearly every segment of the US economy, but the federal government has remained relatively untouched. This is not owing to a lack of interest by the innovation community.

Boston Consulting Group and Eastern Foundry conducted a survey of 109 organisations made up of startups, venture capital firms, and angel funds. Most of the startups were interested in contracting with the government. But numerous obstacles deterred them, including a lengthy and overly complex contracting process, a lack of clarity on how to connect with agencies, and a sense that newcomers have little chance to win contracts over incumbents.

In this report BCG closely examine these deterrents and identifies bold actions that the US Government can take to overcome them. By modifying its approach to contracting, cutting red tape, and communicating more effectively with startups, government agencies can access cutting-edge innovation and deliver better outcomes for citizens.

What drives the startup community

Now, more than ever, startup companies drive innovation, creating new technologies and capabilities. However, because government procurement processes are slow, startups typically don’t view government agencies as potential clients. Contracting with the government is attractive to startups only if it can help them achieve their goals:

Recurring revenue is the number one priority of startups (see exhibit 1.). It allows a company to grow without having to rely on investors, and it helps boost a company’s valuation. In theory, the government should be an attractive customer. As one respondent noted, its “consistent revenue is attractive, and its contracts are typically longer term than most private-sector contracts”. But because the government’s traditional procurement process is complex and long, it is costly for startups to participate. 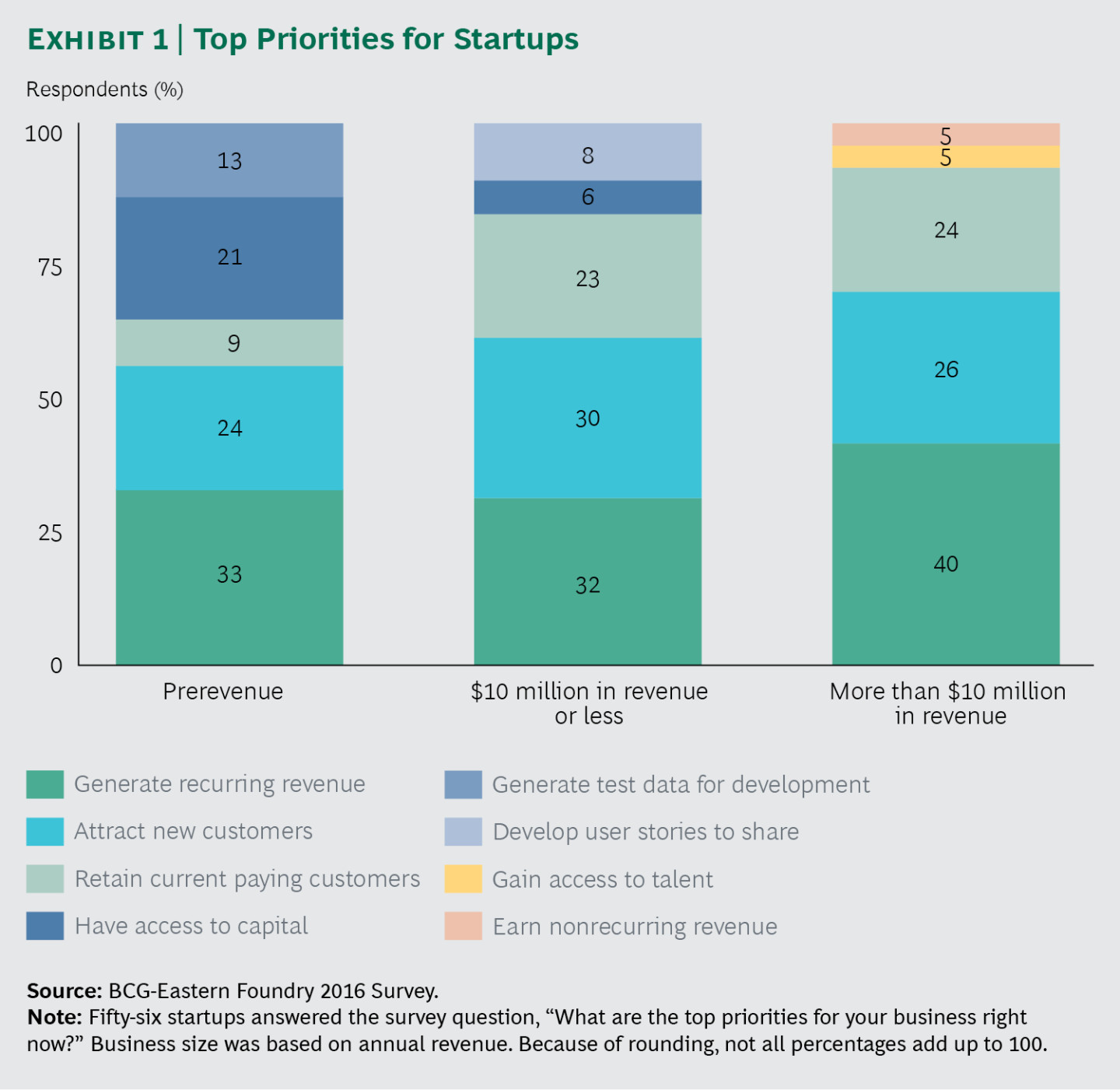 Embedded in the capital-raising process is the perceived value of the company. A high valuation allows the company to raise capital without giving away too much equity. But most companies would prefer to generate revenue than give away equity. Consequently, quick sales are vital.

To succeed, a product must attract customers. Because typical startup solutions often possess a short “shelf life” before competing technologies or capabilities emerge, it is important for startup companies to rapidly identify customers for their products.

Startups will carefully evaluate how pursuing a government contract can help or hinder their ability to achieve these goals.

Barriers to working with the government

Startups have an incentive to pursue government contracts because they can be worth millions of dollars. Of the startups we surveyed, only a small percentage said that they had no interest in contracting with the US Government. But numerous deterrents (some real and some perceived) stand in the way of many leaders (see exhibit 2). 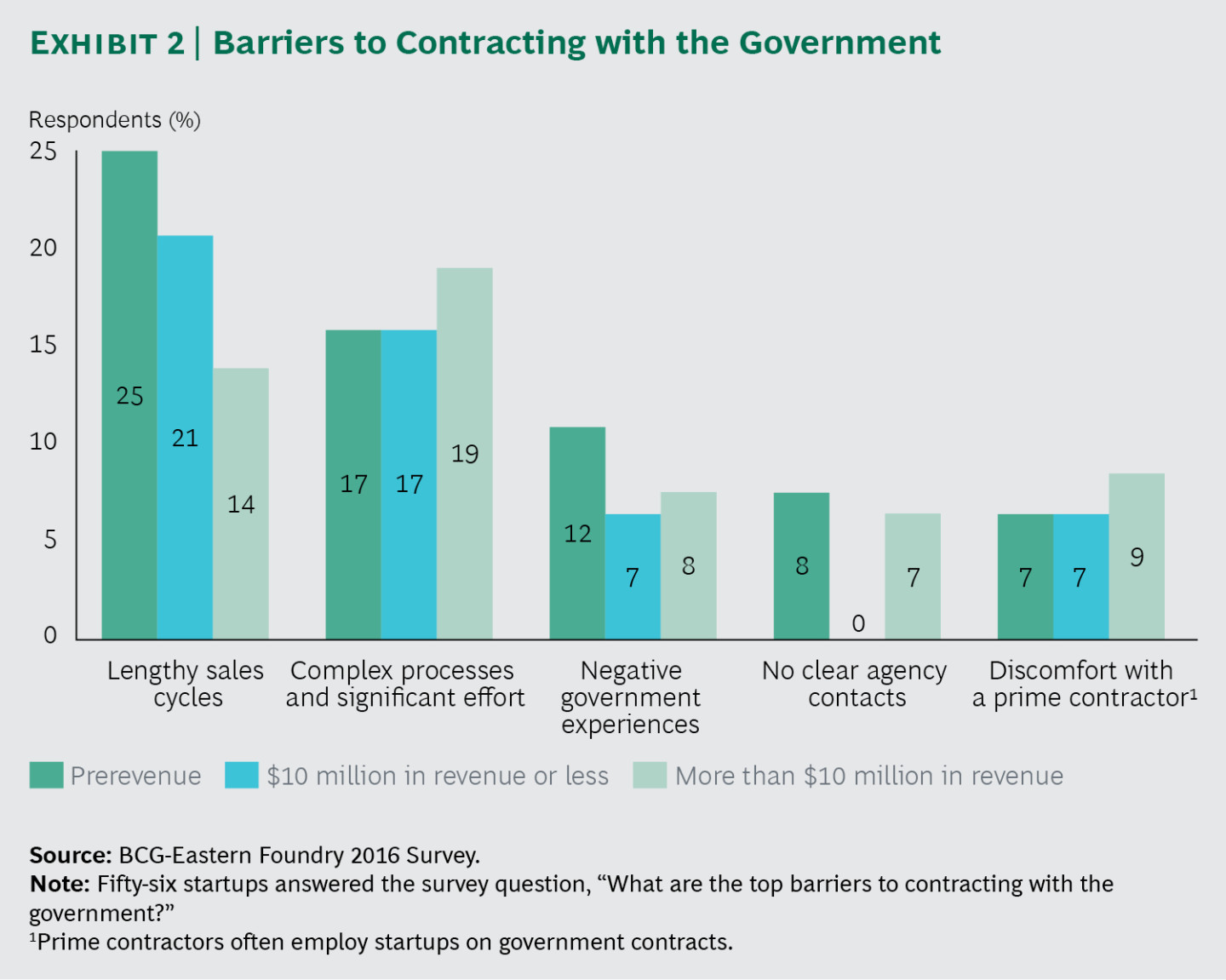 The number one complaint from startups was about the time it takes to secure government contracts. In the words of one survey participant: “A company that has been in business for 6 months and has 12 months of funding remaining is not going to be looking to spend 24 months establishing a relationship with the government. The government must find a way to convince startups that they have a realistic chance of winning a contract within a relatively short period of time”.

A major government agency recently announced that it cut the time it takes to make major IT acquisitions from four years to two years. But this is still too long. Startups are racing to form a network of clients that will provide cash fast — often within 12 to 18 months. It’s not practical for startups to pursue contracts that require two years to close. By then, many startups could cease to exist.

In addition, with technology startups, innovation is their competitive advantage. A company whose product has a nine-month “shelf life” before competitors catch up will lose its edge less than halfway through a two-year sales cycle. Startups fear that their technology will be obsolete (and therefore uncompetitive) when the government finally makes a purchasing decision.

The complexity of the contracting process lengthens the time needed to pursue a contract. First, rigid requests for proposals (RFPs) mean that a startup must write a lengthy proposal tailored to a specific approach. Second, startups often do not have “indefinite delivery, indefinite quantity” contracts (or framework agreements) in place with the contracting agency. They also often lack a General Services Administration schedule. This effectively makes them ineligible for a high percentage of contracts.

Government agencies advertise opportunities primarily on one portal: the Federal Business Opportunities website. But startups often lack a business development department to monitor this website and sift through the thousands of opportunities. The search process requires a great amount of effort. Only larger contractors can afford to pay someone to monitor the bid boards.

Our survey indicated that respondents are concerned that government work is not viewed as prestigious, partially because of negative government experiences. Some startups expressed reluctance to work with the government for fear that it will tarnish their brand in the eyes of potential employees or customers. 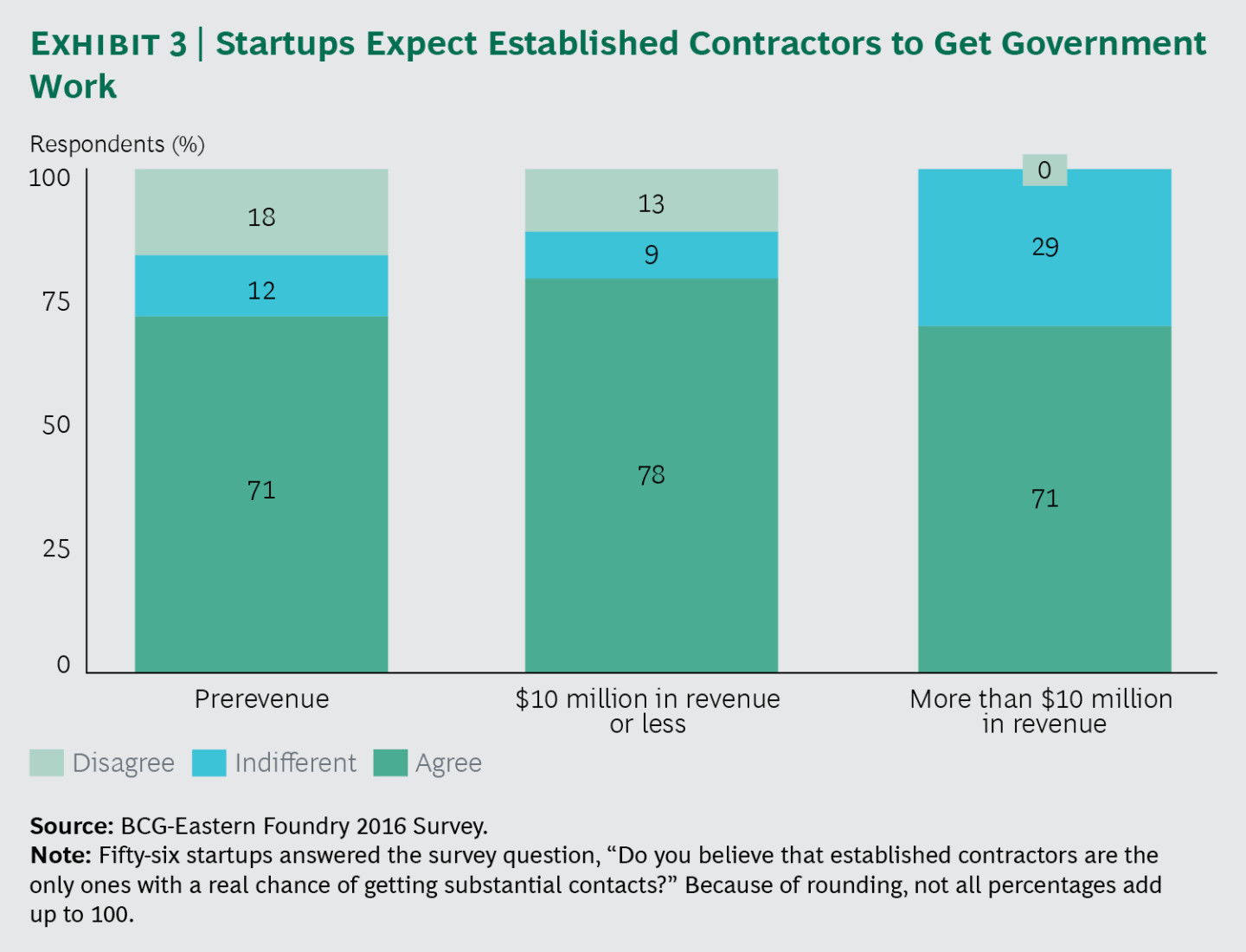 This article was first published by Boston Consulting Group and The Mandarin.