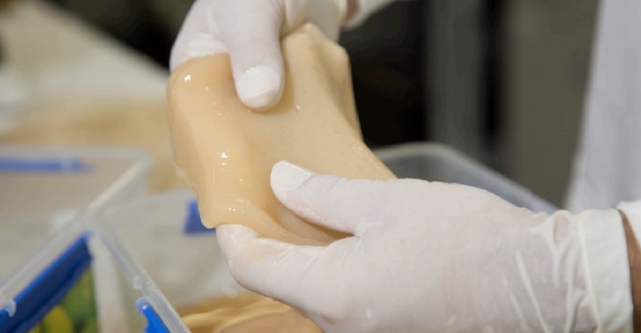 The Nanollose cellulose-based fiber can be made from beer and wine. Source: Supplied.

Perth biotech startup Nanollose has raised $5 million from investors ahead of listing on the Australian Securities Exchange, as it continues its mission to take on the textiles industry with its unique offerings: fabrics derived from beer and wine.

Nanollose founder Gary Cass discovered the alcohol-fabric hybrid a decade ago by mistake while he was making wine. The wine turned to vinegar after it became infected with naturally occurring bacteria, but an interesting by-product also emerged: a leathery material made of cellulose fibres, which when dried had a cotton-like appeal.

This led Cass to found Nanollose in 2014, with the startup developing sustainable textiles made out of cellulose derived from this strain of bacteria.

While the company made its international debut two years ago when it showcased a dress made from fermented beer at a fashion show in Milan, it also uses non-alcoholic sources like sugar and food to produce cellulose.

The unusual source of the product’s materials may prompt scepticism from some, however chief executive Alfie Germano is adamant that the startup is “not selling dreams and secrets”. “It’s truth,” he says.

“It’s going to take time and effort, but we’ve made some major breakthroughs,” Germano tells StartupSmart.

The textile’s major value lies not so much in its novelty, Germano says, but rather in its sustainability as a fabric source that doesn’t exploit foreign workers or deplete natural resources as it is completely plant-free.

“The textile industry are all screaming out for alternative sources of clothing,” Germano says.

“We’re trying to be that sustainable alternative solution.”

Nanollose has now closed the book on its initial public offering, which the company says was oversubscribed and saw “high profile investors” purchase a total of 25 million shares at 20 cents a share.

Of the $5 million raised, $2.2 million will be allocated to research and development of the textile used by the company, and $400,000 will be dedicated to patent applications and funding marketing operations, according to the startup’s prospectus, which was lodged with the Australian Securities and Investments Commission on August 21.

Germano, who has previously worked for large apparel brands including Gap, says the startup plans to list on the Australian Securities Exchange in coming months, with the ASX indicated November 11 as the anticipated listing date. The IPO offer is now full, and Germano says Nanollose will not be issuing any further shares.

The startup is currently pre-revenue and pre-customers, and plans to commercialise Nanollose in future by licensing its technology to customers and industry players.

Startups raising funding through IPOs have stirred controversy within the startup ecosystem in the past, but Germano says listing on the ASX is crucial to accelerate the company’s growth and validate its offerings to consumers.

While the company has been growing “organically” and had raised two previous rounds of seed funding amounting to $800,000, Germano says an IPO was the best way to “get the funds to accelerate faster” in order to be “taken seriously by the captains of industry — the retailers and brands”.

“We could sit here and dissect if it was too soon or too late [for an IPO] but if we had just kept doing the same thing we’ve been doing now, I don’t think we would have this ‘steam train’ type approach [to growing the business]” he says.

“We’ve been growing organically for 10 years: we realised if we’re serious about making it happen then we will get the money and crystallise it [the product offering] in the forge,” he says.

While Germano says Nanollose has received widespread interest from industrial partners across a range of sectors, the startup realised it “can’t be everything to everybody” and made the decision to stay focused on its core offerings: providing sustainable offerings for the textile industry.

“It’s easy to get cluttered and paralysed with potential: we want to spend 100% of our time on the 80% of things we can achieve,” Germano says.

He adds that the support seen in this oversubscribed IPO reinforces the market demand for sustainable products, which will have “monumental” impact on the textile industry.

“As sure as I’m standing here looking at the beautiful blue Perth sky, I know that everyone wants an alternative [to environmentally harmful textile manufacturing]” he says.

“The [textiles] industry want us to be successful because what we can do for them is monumental; everyone wants to win together,” he says.