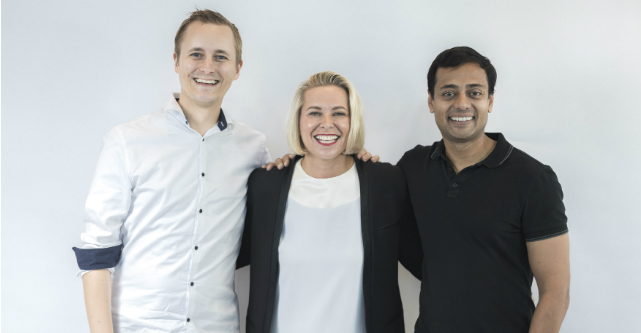 A recruitment platform co-founded by 99Designs founder Matt Mickiewicz and used by tech giants like Facebook and Uber is launching in Australia.

Founded in San Francisco in 2012 and valued at more than $250 million ($US200 million), Hired will open its regional headquarters in Melbourne starting with a team of seven.

“Based on the growth we’ve had so far, hopefully, in the next 12 months, we’d like to double that,” Hired general manger for Australia-New Zealand Sascha Gray tells StartupSmart.

Since the platform’s soft launch in Australia in February, Gray says Hired has signed up 17,000 local job candidates and more than 500 companies.

“It felt like the perfect time to come here,” she says.

“It has signalled that the Australian market, particularly in Sydney and Melbourne, is ripe for disruption.”

Hired CEO Mehul Patel says what’s driving this is the problem the platform is solving serves a massive market.

Choosing a job is the most important decision a person can make after selecting their partner in life, he tells StartupSmart.

“Eighty-seven percent of the global workforce is unhappy [but] only 20% plan to change jobs in the coming year,” Patel says.

A huge reason for this, he believes, is the pain and misery of looking for work is often worse than being in a job you hate.

“We want to resolve this pain,” he says.

“We’ve created a marketplace that essentially matches the best candidate to exciting companies.”

Through a selective screening process, Hired has chosen talent from more than 500,000 candidates to feature on its platform.

But instead of these people then having to search for jobs, opportunities are sent to the candidates with salary details upfront.

“Once they’re on the platform, we really put them on a pedestal,” he says.

The platform has turned the tables on traditional recruitment platforms and Patel believes a model that allows companies to approach candidates, rather than the other way around, will give them a competitive edge over local incumbents like Seek.

“We’ve got a four year lead on some of those competitors,” Gray adds, when referencing the marketplace-nature of the platform.

Signing on powerful clients by creating value that resonates

As the platform launches down under, Hired is walking in with a powerful client portfolio that includes the likes of Canva, Atlassian, Envato and Kogan.

Asked how the team managed to get these clients in, along with giants like Facebook and Amazon, Patel says it boils down to creating a value proposition that resonates.

“We’re moving to an innovation economy that’s powered by the best knowledge workers,” he says.

“How do you engage people to take interest?”

It’s this focus on engagement and creating such a personalised experience for users on its platform that caught the eye of these big companies, he says.

Gray says it’s also about creating a great solution for companies like Canva that set such a high benchmark on the quality and type of talent they bring in.

Creating a tech talent magnet down under

Since Hired’s soft launch in February, Gray says has been doing on the ground research with clients and potential customers to understand the market and localise the product offering.

“Our vision was to really go out and get a feel for the market,” she says.

The company’s research reveals a massive appetite for tech professionals among Australian companies, which take 24 days to make such hires compared with the global average of 68 days.

“Thirty-nine percent of total interview requests are going to international candidates, which is significantly higher than other cities around the world,” she says.

“That is quite unique because the visa situation is a lot easier here and government is a lot more lax to allow sponsorship for tech workers.”

Victorian innovation minister Philip Dalidakis, who welcomed the Hired team to Melbourne following initial meetings with them on a recent trip to the US, is hopeful the 20 forecasted jobs the company will create in Victoria over the next two years will also help retain some of the state’s local tech graduates.

“Victoria has more tech graduates than anywhere else in the country and having Hired’s innovative jobs platform focusing on high-skill roles will be a significant driver of more jobs and better jobs for Victorians into the future,” he says.