An Aussie entrepreneur has seen a 15-fold uptick in revenue after his AI-powered art side-hustle went viral on a Reddit thread overnight.

Queensland-based Angus Russell, a software engineer at Atlassian, is also the founder of NightCafe Creator, which he runs with his fiancée Elle Moule.

The startup is an AI art generator, allowing users to upload pictures to be reimagined in a style of their choice, reminiscent of world-famous artists.

Alternatively, users can input a text prompt, inviting the AI to generate a completely unique image. 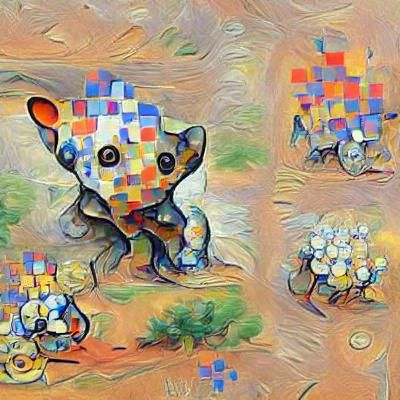 Artwork created through NightCafe Create using the headline of this article: How one Reddit post led to a 15x revenue boost for an Aussie AI art generator. Source: NightCafe Create.

One morning last week, Russell woke up to an inbox full of emails complaining the site was down. The site had been inundated with traffic and the servers had crashed.

A user had posted an image generated by NightCafe on the r/oddlyterrifying subreddit, a group with some 1.3 million members.

That post has now generated more than 1500 comments, many of which are Reddit users sharing their own creations, generated from phrases such as ‘a freaky crow whispers at dusk’; ’college dog in a spacesuit’ and ‘euphoric desert sunrise’.

One Reddit user even created a new r/nightcafe subreddit, dedicated exclusively to sharing NightCafe art. At the time of writing, that subreddit has 7300 members

For Russell, who woke up to all of this unfolding, the influx of traffic meant he had to make some quick updates to the product, including scaling up his rendering servers about 500 times over.

The website created more images in the space of two days than it had in the three years previous, combined.

The site allows a certain amount of free credits for images each day, and users can pay to access more, or to create better quality images or purchase prints.

On one day, Russell says, NightCafe made about 15-times its previous daily revenue record.

“We’re only just now shortening the list of emails that we still have to reply to.”

While last week’s traffic spike may have been a one-off, the entrepreneur hopes it will lead to growth in the business in the long-term.

Already many of the new users have become repeat customers, he says.

Russell says while he didn’t expect it, NightCafe was well placed to capitalise off of a traffic spike “because of the three years that I’ve put into it already”, he says.

If he hadn’t laid that groundwork, he notes, there would have been nothing generated that would have been good enough to go viral. Equally, if he had built for scale from day one, he wouldn’t have been able to perfect the product.

“My early efforts on this app have been all around getting ready for that scale, and a lot of the other features that made the scale possible,” he explains.

If he has any advice for other founders, it’s to worry about an influx of customers when it happens, not before.

Since the surge last week, Russell has been active in the conversations on Reddit, running an ‘ask me anything’ thread that garnered a considerable amount of conversation in itself, and responding to questions and comments about the tool.

All of this helps the business get feedback on the product, and build a community around it — the kind of community that will help it grow.

“I think that’s going to play a big role in the future of the app.”

Zotts and Co founder Kristen Zotti helps explain what businesses can do when they go viral for the wrong reasons and attract criticism online.

How Seabin’s viral video campaign led to $5 million in sales, and an equity crowdfunding raise

Following a viral video campaign, Australian startup Seabin has $5 million worth of product in operation, in 52 countries, and is gearing up for its next phase of growth.