Regtech startup Checkbox to represent Australia at Startup World Cup: “Bring it on”, say the founders

The Checkbox team and other pitch comp finalists at StartCon. Source: Supplied.

An Aussie startup will be jetting off to San Francisco to represent the country in one of the world’s biggest startup events after winning the annual pitching competition at last week’s StartCon conference in Sydney.

And the founders think they’ve got a pretty good chance of taking out the top prize.

“I’ve got a ton of confidence in our team and our product, and I think we’ve got a really good shot at winning the whole thing,” Evan Wong, co-founder of winning startup Checkbox, told StartupSmart.

“I’m not scared, I just really want to be up on that stage. Bring it on.”

Wong is one of the brains behind regtech startup Checkbox, along with co-founders James Han and Paul Wenck. Their startup aims to simplify and digitise regulation and legislation for companies to enable easier compliance checks through a simple web-based application.

As part of the StartCon pitch competition, Checkbox won $120,000 of IBM credits to spend in the business and flights to San Francisco in March next year, where they will participate in the Startup World Cup and pitch before the likes of Steve Wozniak and Tim Draper.

The birth of Checkbox

Checkbox officially launched in January this year as a solo project ran only by Wong. The founder graduated from the University of New South Wales (UNSW) with a commerce and law degree at the end of 2015 and was all set up to slide into a “prestigious” management consultant position at a big four accounting firm.

But despite feeling set on taking the position at the time of graduation, Wong says he began to baulk at the prospect of spending the rest of his life in a corporate role. He’d been inspired up to that point by a successful tuition firm he’d been operating for six years throughout university and wanted to have another crack at starting his own thing.

“I decided to try and push out the break between uni ending and me working full-time as long as I could, but the company would only let me defer the role for six months,” he says.

“So I had six months to start my own thing. Beginning Checkbox was also solving a personal desire of my own, along with giving me something to do with my time.”

The actual inspiration for the concept behind Checkbox was born out of Wong’s days running his small tuition company Hero Education all throughout university. Despite studying both business and law, he still found compliance confusing, and worried, if he couldn’t figure it out, what other business owners were also lost?

“I’d read the regulations and I’d have no idea if I was breaking the law or not. And I would think about all the mums and dads running their own businesses, and how lost they must be,” he says.

The first iteration of the application was named “Comployment”, which had a short shelf life. Checkbox as it’s known today only came into existence towards the end of 2016, and it was at about that point Wong felt ready to find a co-founder “crazy enough to join my journey”.

That crazy person ended up being Wong’s best friend since high-school James Han, who came on board as the company’s chief technology officer “because he’s down for anything and super smart”, claims Wong.

“We hacked it out for a while before we met our third co-founder, Paul Wenck. I met him through the Founder Institute where he was mentoring us, but he loved the idea so much he wanted to come on board as an adviser,” Wong says.

“A bit later, he said he really loved the idea and wanted to come on as an angel investor. Eventually, he said he wanted to be our third co-founder and work full-time on the business.”

“It’s crazy to think that this time last year we only had an idea, and three very keen co-founders. If you had asked me a year ago if I would be where I am today, I would have said ‘not in a lifetime’.” 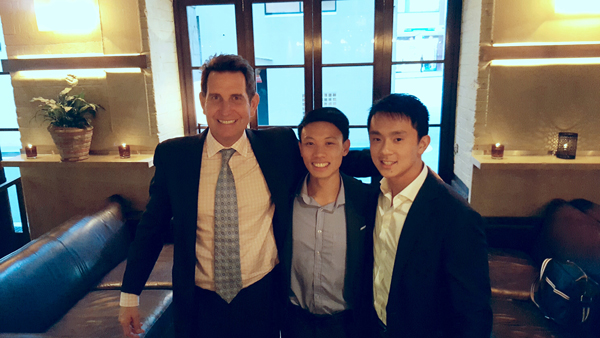 A jarring transition from small business to startup

While Checkbox’s clients may be more on the corporate side, Wong still remembers his days of running his small tuition business fondly. However, the transition to startup life was jarring for Wong, who says it took a bit of adjusting.

“There’s a crazy juxtaposition between startups and small businesses. A startup does what a small business would do in 10 years, in a matter of months. It’s so fast in terms of business development — there’s a lot of pressure, and there’s a culture around growing quickly in a startup,” he says.

Checkbox has secured more than 30 enterprise-level clients over the year, and with a number of accolades under the startup’s belt, Wong is becoming aware the startup has some expectations to live up to.

“You see businesses who win a bunch of awards but they were all three years ago, and you wonder what’s happened since then. We’re not going to be that business, I’m confident about our products and meeting everyone’s expectations as we move into 2018,” he says.

And along with competing in the Startup World Cup, the team says they’re on the hunt for investment, having bootstrapped the startup entirely to this point.

Wong hasn’t ironed out all the details yet but says they’ll be looking to raise between $1 – $2.5 million, though they hope the $US1 million in funding on offer as the Startup World Cup grand prize will also be theirs.

Wong’s longer-term goal is to be a serial entrepreneur, and eventually, inspire other entrepreneurs. While he loves Checkbox, he acknowledges he has an “itch” to start businesses, and doesn’t think he’ll stop here.

“I’m 24, so in my lifetime I don’t think Checkbox will be my last startup. I have an itch to keep creating new businesses and ideas,” he says.

“My goal personally in terms of career path is to get enough experience in the startup world to begin to inspire others. I want to become a figurehead and a mentor, and an advisor for startups.”

“I need a few successes under my belt to have some legitimacy and prove myself I can really do it, but I’m passionate about achieving that goal.”

StartupSmart attended StartCon as a guest of Freelancer.

Great story. But after watching the pictching competition at StartCon, if this is how all of them are run, who knows who will win. The scoring I saw depended on judges and personal preferences, and I expect, who they previously knew. The final Checkbox pitch was certainly not the best presentation, not the most interesting or the most earth shatterring. Yet still won. It seems that, like most things in life, it isn’t what you know, but who you know!

Great story. But after watching the pictching competition at StartCon, if this is how all of them are run, who knows who will win. The scoring I saw depended on judges and personal preferences, and I expect, who they previously knew. The final Checkbox pitch was certainly not the best presentation, not the most interesting or the most earth shatterring. Yet still won. It seems that, like most things in life, it isn’t what you know, but who you know!