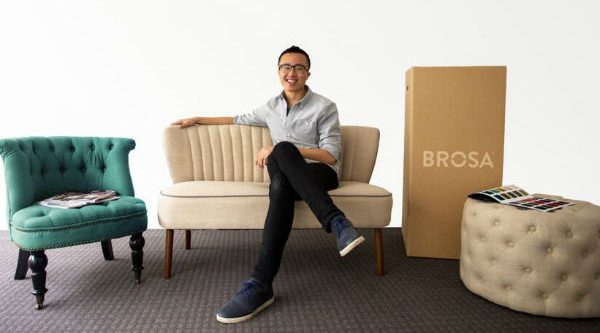 Melbourne-based online furniture startup Brosa has raised $5 million in a Series B funding round led by Bailador Technology Investments, AirTree Ventures and BMY Group in a move co-founder and chief executive Ivan Lim says will take its growth to the next level.

Lim says the startup raised these funds with the aim of becoming a “formidable online player” and a dominant player in the furniture market going in to 2018.

Launched in 2014, Brosa offers a vertically-integrated model that combines furniture retailing with technology via an online platform, where consumers can purchase designer products without many of the extra costs associated with traditional wholesale and retail furniture operations.

It’s an offering that previously proved enticing for AirTree, with the venture capital fund investing $2 million into the startup back in 2015.

Since raising this initial $2 million, Lim says Brosa has increased its full-time employees from 25 to 70, and has designed and launched over 2000 new products. The startup has also built its own 10,000 square metre distribution centre, and Lim says that since AirTree’s initial investment in late 2015, its order volume and revenue from customers has grown more than 10 times in size.

This most recent capital injection will now support Brosa as it focuses on expanding its platforms and hiring senior talent in its software engineering, technology and furniture departments to “propel Brosa to the next stage of growth”, according to Lim.

Brosa refers to itself as “digitally native vertical brand” or DNVB for short. It’s a trend that Lim hopes will shake up the retail industry for home goods

“We believe that home and living is the next industry awaiting the disruption that comes from technology-enabled retailers,” he says.

“Brosa is part of a new breed of digitally native vertical brands who have a deep understanding of their customers and orientate their business around delivering an amazing experience by leveraging technology.”

The concept of a DNVB was a proposition that Lim says took some time for investors to understand when undertaking this raise.

“There was certainly an education piece [required in] helping investors understand what we’re building as a digitally native vertical brand,” he says.

“There is less exposure to these models in Australia [in] comparison to SaaS [Software-as-a-Service] or marketplace businesses, however investors [we spoke to] were certainly aware that the DNVB model is significantly more prominent in the US, Europe and Asia.”

Lim adds that while Brosa was focused on communicating the value of its DNVB model to investors, there was “a lot more riding on the raise than just an idea”. Lim says this raise was fundamentally “about scaling the business and showing that there is great execution capabilities across the business as well as strategic understanding”.

“Ultimately we want to transform the home and living retail experience and make the process of creating a beautiful home painless for Australians,” Lim says.

Would be far more interesting to get some revenue and profit numbers in the article. All this shows is that some VC funds have sunk $7 million into a retail business that could be an actual dud!

Would be far more interesting to get some revenue and profit numbers in the article. All this shows is that some VC funds have sunk $7 million into a retail business that could be an actual dud!