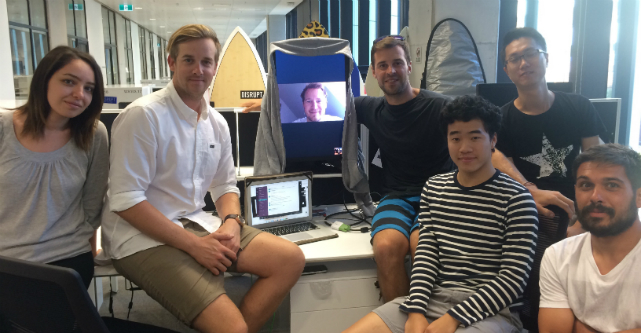 Three rival countries have already offered to house million-dollar Australian startup Disrupt, whose co-founder was deported earlier this month for not picking fruit for three months.

Disrupt COO Chris Bailey was deported by the Border Force for lying about having completed the three months of regional work needed to extend his working holiday visa, with the startup’s co-founder Gary Elphick saying his company wasn’t eligible to sponsor Bailey’s visa.

Elphick says offers have already been flowing in from other ecosystems, with representatives from the US, UK and China all trying to get the startup to relocate its operations.

“They’ve jumped in and offered to help, and some have been quite aggressive about it,” Elphick tells StartupSmart.

“They’ve all said something along the lines of, ‘we can’t believe this happened, this is crazy’. Let’s talk and we’ll sort out visas for all the team’.”

The elephant in the room

Elphick says he is yet to make a decision about whether to relocate his startup but says he may be forced to now his co-founder is working out of a bedroom in Wales.

“We’re still firmly grounded in Australia and want to stay here, but if things don’t work out we’re keeping all our options open,” he says.

“There’s no way we can operate with three hours of communication between our head of operations and the rest of the team. It’s an elephant in the room at the moment.”

He says it’s heartening to have the support from other startup ecosystems around the world, and if Australia doesn’t improve in this area it will continue to lose potentially lucrative startups overseas.

“It’s great to know that people are out there looking,” Elphick says.

“It’s really competitive on a country-by-country basis to get the best access to talent and everyone wants the tax dollars.

Elphick says he has also enjoyed support from the local ecosystem, with several other founders telling him that they also have employees that are risking deportation.

“At least 10 other founders have reached out and said they’ve also got someone hiding in their business as well,” he says.

“They won’t be going overseas now either. That’s crazy to me.”

“Making the best of a bad situation”

While the team weighs up its various options, UNSW – where Bailey and Elphick volunteered as mentors – has helped to erect a large TV in the Disrupt office, where Bailey video conferences with his employees for a few hours each day.

“We’ve dressed that up and put a little jacket on it,” Elphick says.

“But it’s just putting plaster over something. We can continue to operate for now without customers being any the wiser but it’s not a long-term viable solution.

“He was definitely in the wrong and there’s nothing we can do about that but we’re making the best of a bad situation.”

He says he wants the discussion to centre on the long-term ramifications of Australia’s immigration policies rather than the actions of Bailey.

“I was angry and frustrated when it happened, now I’m just a bit more disappointed,” Elphick says.

“We were not in the right. From the get-go we said he was in the wrong. But when you’re backed into a corner and have no other options as a startup you do what you need to in order to survive.”

“It’s not about moaning about what happened – yes he should pay for the consequences of it. It’s more about what we can do for future startups, for new companies starting out.”

He says he hopes the government takes a close look at its immigration policies and the potential entrepreneurial visa.

“We need to facilitate the greatness we’ve already got in the country with recent graduates, students and highly-skilled people in corporations,” Elphick says.

“We need to facilitate these people getting into high-growth startups and then look to attract other companies and talent from overseas.

“We need to sort out our own stuff first. The government is spending millions of dollars on an ideas boom media campaign but it needs to look at how it can actually put some substance behind it.”