An Australian restaurateur and fishmonger is gearing up to take on the “antiquated” fishing industry through the launch of a new app-based seafood trading platform, raising $2 million in seed funding to help launch the product across the country.

The ShoreTrade platform aims to cut out the numerous middlemen and suppliers in the seafood supply chain, which founder Peter Manettas says has been plagued by inefficiencies for over 60 years.

“It’s a completely antiquated industry and very closed-door. There’s a perception of ‘this is how it’s done’, but we’re hoping to change that,” Manettas tells StartupSmart.

ShoreTrade works via a mobile app, which is used by both fisherpeople, individual buyers and fish retailers. Upon catching their seafood, the fishers upload their catch to the platform, including when it was caught, the price, and methods of categorising and grading.

Manettas says the fishers are recommended a price per kilogram based on a moving average market price aggregated from other sellers and buyers on the ShoreTrade platform.

“This gives the buyers and sellers product values based on what’s currently trading,” he says.

After being purchased, the system links the catch automatically with logistics platforms such as freight companies and airlines to have the fish sent as quickly as possible to the buyer.

This direct boat-to-table system is at stark odds with current methods, which Manettas says involves seafood being sent into a singular auction process with 100-150 buyers, often with high commission rates, and then passed onto another two or three buyers.

The founder says not only does this result in seafood passing through up to five different pairs of hands before reaching consumers, but it also provides fish markets with a “monopoly” on the selling industry. 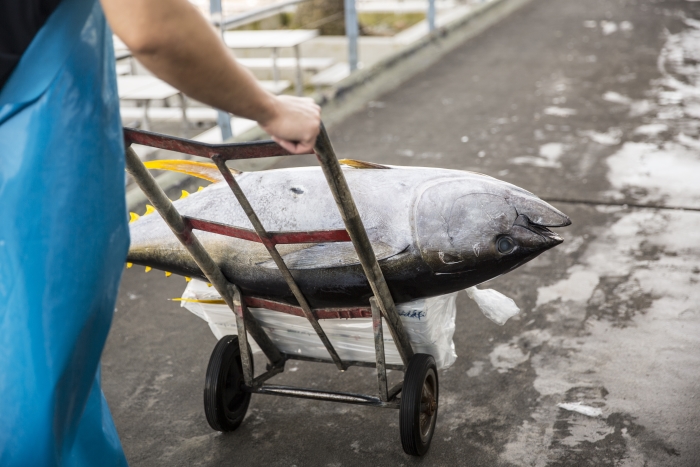 Breaking into an antiquated and monopolised industry would be a hard ask for any new startup, and Manettas says it wouldn’t have been possible without his history in the industry and past experience.

Manettas is the founder of Peter Manettas Seafood and has helped run his family hospitality business Nick’s Restaurant and Bar Group for the past 15 years. He says his father and grandfather were also in the fishmongering business, and his deep expertise laid bare the industry’s problems.

“The industry doesn’t allow a lot of people to come in and do something like we are, and we are unique in that we have the tech and the relationships to enable and facilitate such a thing to happen,” he says.

ShoreTrade itself has been in the works for the past two years, and originally launched as a business-to-consumer site to see how everyday shoppers would react to purchasing seafood online.

It then moved back into focusing on the B2B market and has recently locked down a $2 million investment from Australian angel investing group Investible, as well as a handful of other investors, including the former owner of Primo Meats Robert Lederer.

Being a first-time startup founder, Manettas says the raising process was “quite interesting”, and the founder was very selective with who he wanted to partner with.

“It was about strategic investment, not just about the money. All the investors we have are adding value to the business and the platform,” he says.

“The cornerstone investors I brought on are able to advise me in specific ways without getting too heavily involved, and I’m taking their advice every step of the way.”

Blockchain integration in the works

Finally, like any good 2018 startup, ShoreTrade’s system wouldn’t be complete without a blockchain implementation, which Manettas has planned for the platform after it launches.

The founder says product traceability is a big issue in the industry, and believes the features of blockchain technology, such as its immutability, gives it the edge over other used technology such as barcodes and QR codes.

However, the founder wants to roll out the blockchain side of things slowly and says when he does, he’s unlikely to even brand the solution as ‘blockchain-based’.

“We’d rather just show what the system can do on the traceability side and help expose the issues within the industry,” he says.

NOW READ: Commercial fishing is worth more than jobs and profits to Australia’s coastal towns