A number of fake online advertisements for Bitcoin and cryptocurrency trading platforms have been fraudulently impersonating judges and investors on Channel Ten’s Shark Tank, with judge Steve Baxter warning followers on Twitter the ads are a “scam”.

Baxter posted a link to a fake news article earlier this week, titled “The Biggest Deal In Shark Tank History, That Can Make YOU Rich In Just 7 Days! (Seriously)”, which appears as a full page advertisement on celebrity news and entertainment blog The World of Fame.

More Bitcoin Scams using the names of the @channelten @sharktankau Sharks. This is a scam.
Please do us a favour and retweeet this.https://t.co/vVRVpVHiK9 @Janineboost @NaomiSimson pic.twitter.com/fLEWG1DaO0

The advertisement claims judges Glen Richards and Baxter engaged in a “bidding war” over online Bitcoin trading and purchasing business Bitcoin Trader, with a fake deal for $2.5 million for 20% of the company outlined. Boost Juice founder Janine Allis was also roped into the scam, with the fake article claiming the shark bought $250 worth of Bitcoin during the pitch, before seeing it increase in value $73 just three minutes later.

The fake article also included a number of illegitimate quotes attributed to the sharks and various supposed Bitcoin Trader users.

“I’m still in shock, I deposited $250 live on the show and it immediately returned a $73.18 profit after just 3 minutes. That is the biggest and fastest return I’ve ever seen after 3 minutes. This thing is legit,” the article claims Allis said.

“Bitcoin Trader has been the greatest investment I’ve ever made! The business has been growing at over 2,400% this year alone. And as a user of the platform, my Bitcoin trading profits have increased by 320% on virtual autopilot,” Baxter did also not say (and has likely never said at any point). 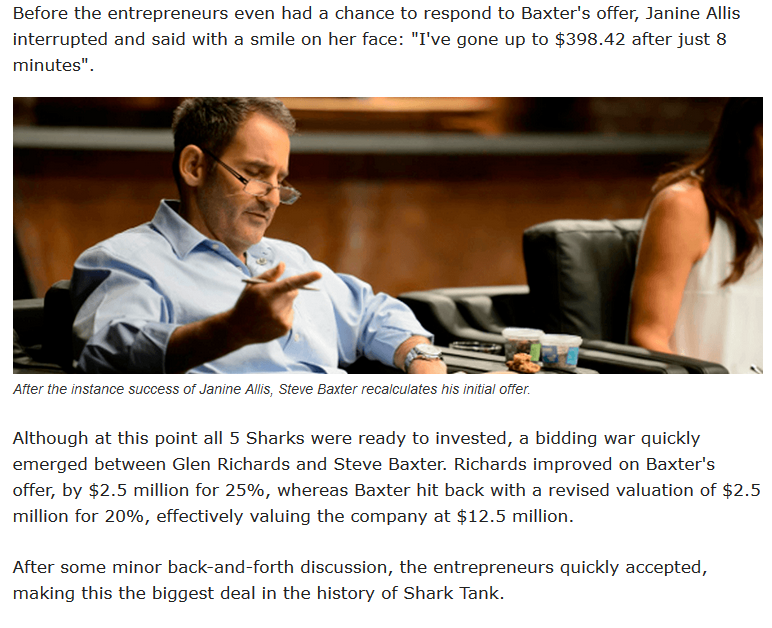 A screenshot of the fake article targeting the Shark Tank judges.

This isn’t the first time Baxter has been impersonated in a scam online; earlier this year, he shared a LinkedIn post when a number of similar fake articles popped up online claiming Baxter was promoting a scheme for “getting rich quick from binary options”. Baxter expressed his outrage at being targeted in such a way, labelling those who execute such scams as “one evolutionary stage below pond scum”.

“It’s not just me; almost anybody with a high public profile gets caught in these scams and closing them down is like playing whack-a-mole — the buggers always pop up elsewhere (I have found out it sort of goes with the territory),” Baxter said presciently.

The Brisbane-based entrepreneur has also been targeted through scam ads that impersonated the SmartCompany website and claimed the entrepreneur was spruiking a similar Bitcoin-related scheme as “the big time”. 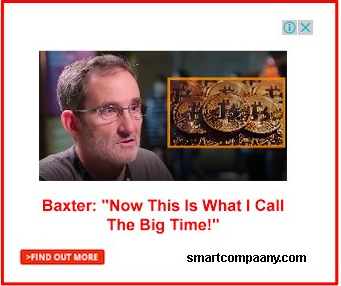 The use of Baxter as a fake-spokesperson for cryptocurrency-related schemes is curious, considering the investor has publicly said numerous times that he is skeptical of digital currencies, telling StartupSmart earlier this year the blockchain is “overhyped” and that hype is “dangerous”.

“The current blockchain situation is as dangerous as tulips were back in the middle ages,” he said.

NOW READ: Shark Tank Bitcoin scam warnings continue as some fans say they were duped by the fake ads

NOW READ: Shark Tank’s Glen Richards on what startups should look for in an investor

I went to that fake site from smart companies website. one of Taboola articles was connected to that spam site.

I went to that fake site from smart companies website. one of Taboola articles was connected to that spam site.

And there it is; an ad to a fake baxter piece, right here on the smart company website, on the article about him being the target of a scam! with the URL smartcompaany.com (note the double a). Websites with advertising (like this one) need better contracts in place with the ad brokers.

That isn’t an ad. That was placed there intentionally as an example. Note the text underneath that states “The fake ad that impersonated the SmartCompany website”.