Season three of Shark Tank has kicked off and the reality TV show for entrepreneurs wasted no time in bringing out the big guns, with a half a million dollar deal inked straight off the bat.

The first company to face the ravenous sharks this season was healthcare tech startup CancerAid, with its founders, Dr. Nikhil Pooviah and Dr. Raghav Murali-Ganesh, and its chief technology officer Dr. Martin Seneviratne appearing in the first episode of the season on Tuesday night.

CancerAid was founded in 2015 by the group of doctors, who are looking to change the face of cancer patient care by providing information, treatment planning and logging, and an online community in the form of a smartphone application.

The app is loaded with features aimed to improve the quality of life of those going through cancer treatment, including medication and treatment journals, and symptom tracking to help provide a better understanding of the effectiveness of certain treatments.

The team entered the tank with the goal of landing an investment of $500,000 in return for a 10% equity stake, with the business valued at around $5 million. In October 2016, the startup had closed a $1.25 million Series B funding round, which valued the company at $4.25 million.

Before walking into the tank, the team had already staked out the sharks, with Pooviah and Murali-Ganesh telling SmartCompany investors Andrew Banks and Glen Richards were the two in their crosshairs.

“The main reason we chose to go with these two sharks, in particular, is thanks to their experience and what they can offer to the different aspects of the company,” Pooviah says. 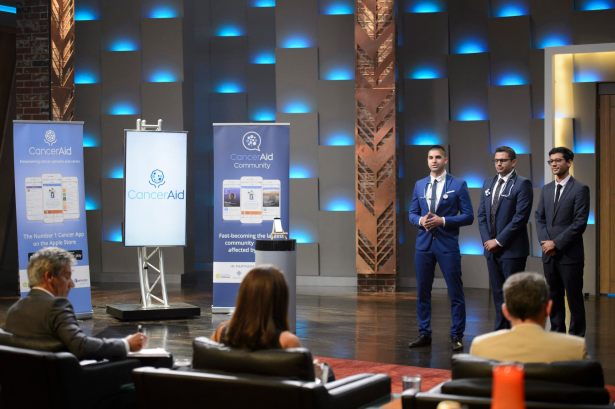 After pitching to the sharks, the three were surprised when all bar Steve Baxter offered to back the company. They issued a counter-offer to Banks and Richards for $250,000 for 5% equity each in a joint investment, and despite Baxter coming back into the fold for a last ditch offer to work with Richards, the company locked in Banks and Richards for the joint investment.

“It was great validation for our product and our business to have all the sharks wanting to be part of our journey. It was really reaffirming of our mission and our values, and it was exciting to see such faith in our business model,” Murali-Ganesh says.

“We went on Shark Tank to get exposure for the business as we saw all the great stories that came out of the program. We also wanted what the sharks offer in terms of mentorship, and to get them on board to help us grow.”

However, after the dust settled and the deal entered due diligence, the team ended up pursuing a partnership with just Banks for a different equity and investment amount. Although the team is tight-lipped on the specifics, the re-evaluation was thanks to the company’s growth placing the business at a “higher valuation”.

In the eight months since the episode was filmed, the team has been taking advantage of Banks’ US contacts, working on expanding the business internationally, with Pooviah saying the whole experience had been “fantastic”.

“With where our company sits right now, we’re still learning a lot, and learning from someone like Andrew is fantastic. He doesn’t just coach us, but he allows us to consider different aspects of the business we haven’t experienced,” he says.

“He’s very supportive and he loves what we’re doing.”

The team’s short-term goals involve scaling the company further internationally, along with internalising their tech team to speed up the app’s development process. An even shorter term goal is preparing for the reception to the Shark Tank episode, with the team expecting a significant spike in interest after the season debut.

“That’s one of the reasons we went on Shark Tank, it’s one big marketing piece for the company,” Pooviah says.

For other founders or business owners working on their pitches or considering heading into the tank, Pooviah recommends having a “clear picture” of what you want to achieve and knowing everything you can before you face investors.

“[Murali-Ganesh] and I knew exactly what we wanted from the show and the segment itself, we knew the best outcome and we stuck to it the whole time,” he says.

“The show itself was a daunting experience; we’ve pitched numerous times but this was the hardest one we’ve ever done. Make sure you articulate your points in a very succinct way and fully understand the business’ revenue model and any other potential questions you may face.”

Make sure to catch SmartCompany’s Shark Tank recaps every Wednesday for insights and interviews from those who swam with the Sharks!