These Aussie entrepreneurs teamed up to #ShareThePlatform with BIPOC entrepreneurs, and roped in Malcolm Turnbull, Janine Allis and Guy Kawasaki to help

Amid the ongoing Black Lives Matter movement all over the world, two Aussie entrepreneurs have joined forces to shine a spotlight on Black and Indigenous Australian business leaders — and they’ve secured the likes of Guy Kawasaki, Janine Allis and even Malcolm Turnbull to help them out.

In another, Rona Glynn-McDonald, a Kaytetye woman and the founder of Common Ground, has a virtual sit-down with Thankyou Group’s Daniel Flynn.

The campaign came about through a partnership between The Creative Co-Operative founder Priyanka Ashraf and racism awareness and education platform One Love Australia, headed up by co-founder Jamal Elsheikh.

Earlier this year, Ashraf was cooking up a podcasting project, setting out to showcase the achievement of South Asian women who held C-suite positions, she tells SmartCompany.

“Working in corporate and then the startup world, although there were a lot of white people who used their platform to open doors for me and for me to get ahead, I never really saw anyone that looked like me at that leadership level,” Ashraf says.

Then, George Floyd’s murder in May sparked Black Lives Matter protests all over the world.

“It became very clear for me that right now isn’t the time to be talking about how amazing South Asian women are,” she says.

As a South Asian woman herself, Ashraf says she became “hyper-aware” of her own privilege.

“If you think about the spectrum, all the different races or minorities, there are layers of privilege within that,” she explains.

“This became the focus.”

Ashraf was inspired by Emma Watson’s iconic interview with Reni Eddo-Lodge, author of Why I’m No Longer Talking to White People About Race.

“Reni is a prolific writer in her own right. But Emma’s audience listened to Reni, and they normally wouldn’t have done that,” she says.

“That was a brilliant model of allyship and amplifying people of colour voices.”

So, she changed tack, and started working on a way to amplify the voices of BIPOC Australian entrepreneurs, and that’s what led her to One Love Australia and Elsheikh.

Initially, she approached him as a potential interviewee, she recalls. But, as their conversation went on, both realised they may be able to more as a partnership.

And immediately, Elsheikh was thinking big.

An engineer by background, Elsheikh moved to Australia three years ago to complete his MBA.

“Back then, there was a lot of misrepresentation by the media about African gangs,” he recalls.

“People were like, ‘how do you feel about being Sudanese in Australia?’

In early-2019, Elsheikh and co-founder Joel Buncle launched One Love Australia, in a bid to help people have productive and educational conversations about race, and to unravel structural racism.

In June 2020, Elsheikh was also reeling from the death of George Floyd, and the protests that followed.

He penned an opinion piece for ABC Life, outlining some of the questions he gets from kids about racism in his everyday life. That led to an influx of interest from corporates, asking what they could do to be better allies.

In the same week, Ashraf reached out.

“The timing was perfect from all angles,” Elsheikh says.

“We got that interest from corporates — people asking how they can help. We told them we were doing this thing and asked them to jump on board,” he adds.

“We want to understand how we can encourage people from more diverse backgrounds to participate more in entrepreneurship.”

Once they had the plan for #ShareThePlatform figured out, Ashraf and Elsheikh set about recruiting interviewers and interviewees for the series.

When asked how the pair engaged such high-profile and international, names, Elsheikh allows himself a brief “humblebrag”.

One Love Australia does have a decent network, he says.

“The way we go about race, it’s not about othering people. It’s about meeting people where they are on their journey. We give people a second chance, a third chance,” he explains.

“If the conversation is not comfortable, that’s when we feel like we should support you even more. That’s made us a bit likable, in a way.”

It meant the founder knows people who know people, he says. Often, he has a contact close enough to twist the arm of the influencer he’s after.

It also helped that Guy Kawasaki was the first influencer to come on board.

“That was very important because that set a benchmark for the campaign influencers,” Elsheikh explains.

But, it wasn’t a hard sell for any of the interviewers, he adds.

In fact, at one point the team were in conversations to get Prince Harry and Meghan Markle involved.

The only thing that stopped the royal couple taking part was time constraints — Elsheikh and Ashraf were moving fast, and Harry and Meghan couldn’t commit to anything within a two-week timeframe.

“All of these people want to help. It’s all about how you pitch it to them. It’s all about giving them a very compelling reason as to why this is important and how it’s going to make a difference,” he says. 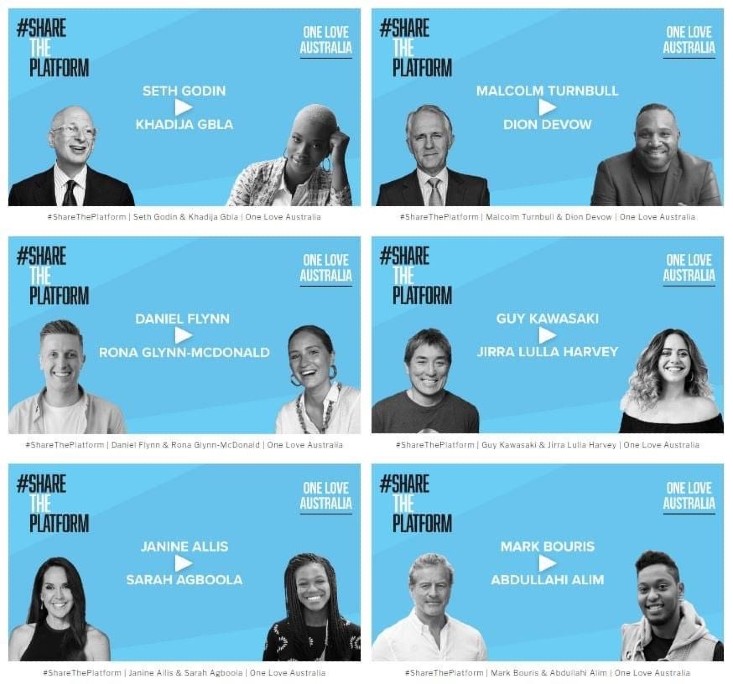 As it happened, where things got tricky was approaching entrepreneurs to be interviewees.

It’s one thing to ‘share the platform’, but you’ve got to make sure the people you’re sharing with want to be showcased in the first place.

“That was one of the bits we were not really sure about,” Ashraf says.

“People are at different stages in their journey. People feel different things about different stuff, especially with Black Lives Matter,” she adds.

“It’s really difficult to approach people without knowing where they’re at and how they feel about everything.”

There have been many, many examples of people speaking up about racism and inequality in Australia, just to be harassed and abused as a result. 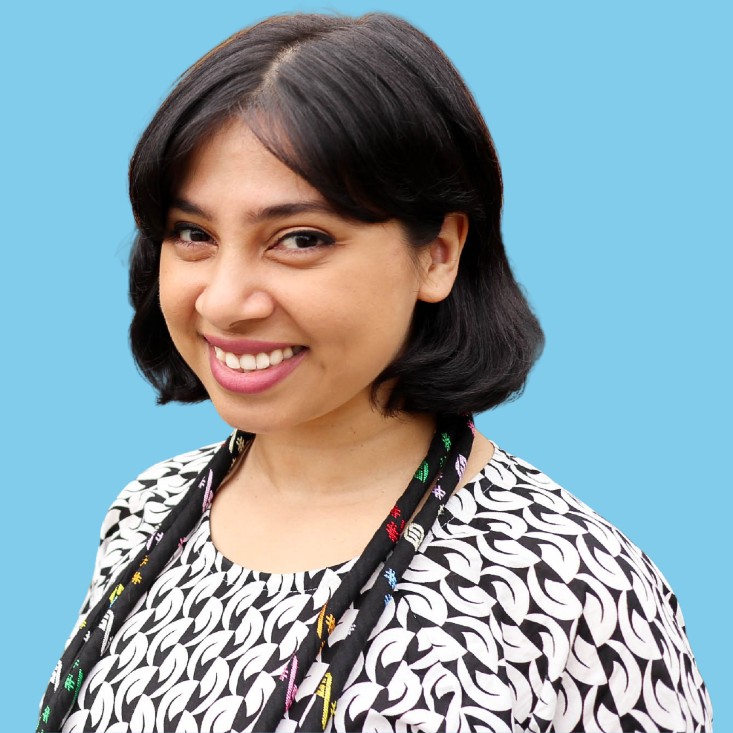 “I completely understand now why it’s actually a lot to ask of people of colour to step up and speak about it,” Ashraf says.

“We’re in an environment where a lot of First Nations people, a lot of people of African descent are being asked to continually and repeatedly almost explain systemic racism,” she adds.

For Ashraf and Elsheikh, it was important that these interviews were not about race or racism. Instead, they’re about business.

“We have more than our stories about racism,” Elsheikh says.

“This is about business. It’s about life. And it’s about the challenges faced.”

You can see the #ShareThePlatform interviews here.

NOW READ: “An imbalance of economic power”: Why are Aussie business leaders afraid to tackle racism?