The Tonsley Manufacturing Innovation hub in Adelaide is designed to accelerate the national adoption of ‘industry 4.0’ technology among hi-tech and manufacturing businesses, as well as foster research and development.

The hub’s February 9 launch in the South Australian capital comes at a time when the nation’s economy is transitioning from a traditional manufacturing base to more digitalised, knowledge-based industries following the closure of Holden’s Adelaide plant late last year, which brought an end to automotive manufacturing in Australia.

Professor John Spoehr, director of the Australian Industrial Transformation Institute at Flinders University, said the adoption of new age digital technology was crucial due to the highly competitive environment of manufacturing internationally.

“Without the automotive industries we need new sectors and new industries that will be at the forefront in the uptake of new technologies,” he said.

Professor Spoehr said the hub would enable closer collaboration between educational organisations and businesses to better understand digital technology in new age manufacturing and its impact on the performance of companies and workers.

The term ‘industry 4.0’ refers to the growing trend of automation and the use of the Internet of Things, cloud computing and cyber-physical systems in advanced manufacturing. 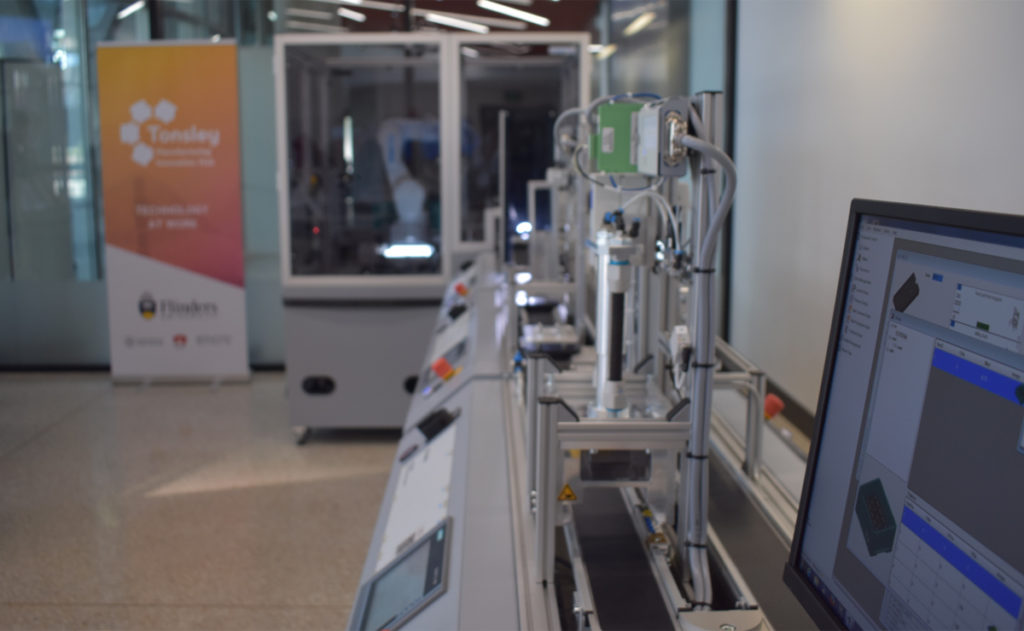 Situated on the ground floor of the Flinders University building at Tonsley, one of the key facilities at the Tonsley Manufacturing Innovation hub is the modular Future Factory. Made in Germany by technology giant Festo and funded by the South Australian Government, it showcases the latest automation, sensor, monitoring, robotic and cobotic technologies and is one of only a few Future Factories in the Southern Hemisphere.

Professor Spoehr said the platform was modularised and could be reconfigured in a variety of ways.

“It’s a great education and training tool for students and workers who are wanting to become familiar with how these new systems operate, but it’s (also) a great way for companies to think about how to adopt some of these technologies in their own workplace,” he said.

Other facilities at the Flinders Tonsley campus include autonomous sea vessels (pictured below) and testing capacity, photonics technologies, a Faraday cage, interactive co-bots, a large hexapod robot for biomechanical testing and a variety of digital manufacturing and rapid prototyping machines. 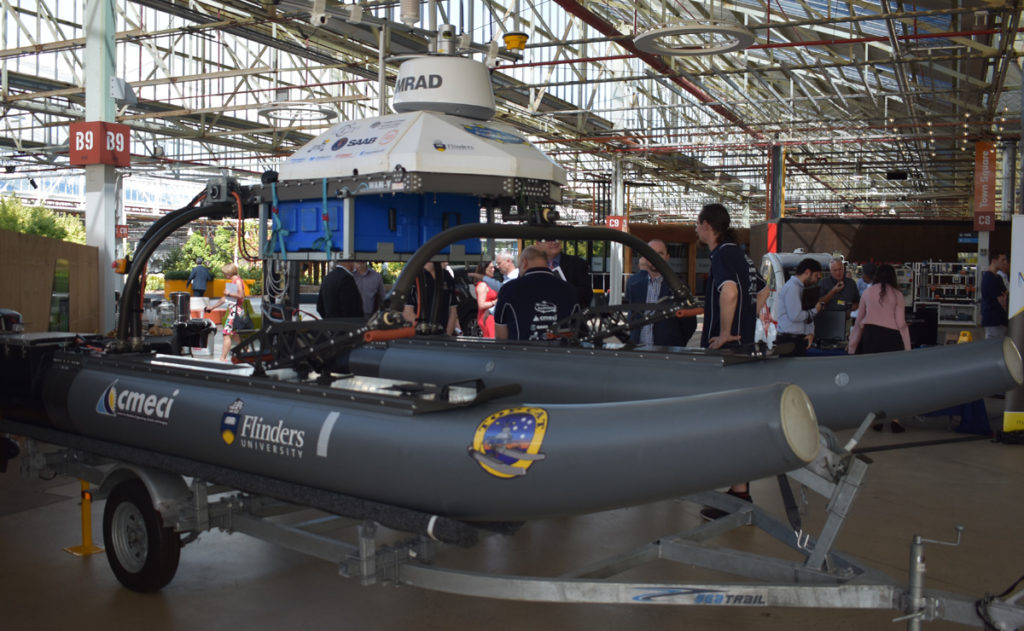 The Tonsley precinct in Adelaide’s southern suburbs, which was once a former car assembly plant, is Australia’s first innovation district. It is a prime example of the changing face of South Australian manufacturing and is home to more than 100 companies including Siemens, Zeiss Vision, ZEN Energy and SAGE Automation.

The last Mitsubishi sedan rolled off the production line at Tonsley in Adelaide’s southern suburbs in 2008 sounding an early warning for the future of traditional manufacturing in South Australia.

Almost a decade on and the site has been transformed into a leading innovation hub, bringing together advanced manufacturing companies, University STEM programs, renewable energy leaders and hi-tech pacesetters in the one precinct, which is now home to more people than the last days of Mitsubishi.

SAGE Automation is a national control services and industrial automation company founded in South Australia and is among 20 businesses associated with Flinders University at the TMI hub.

The Tonsley-based business specialises in automation technologies and services for manufacturers across Australia.

SAGE Automation chief executive Adrian Fahey said the company’s strategic partnership with Flinders University and relationships with other businesses in the precinct were among the main benefits of its association with the TMI hub.

“Being in this hub gives us an opportunity to continue to focus on what we’re doing in industry 4.0, but also to tap into some of the best thinking and new thinking from the institutes and the university,” he said.

“I think this is going to be a precinct that’s going to draw potential customers who have problems that need solving and will come here and see this is an environment where that can happen.”

Based in Melbourne, the Innovative Manufacturing Cooperative Research Centre provides a range of services for Australian manufacturers seeking to implement industry 4.0 technology. 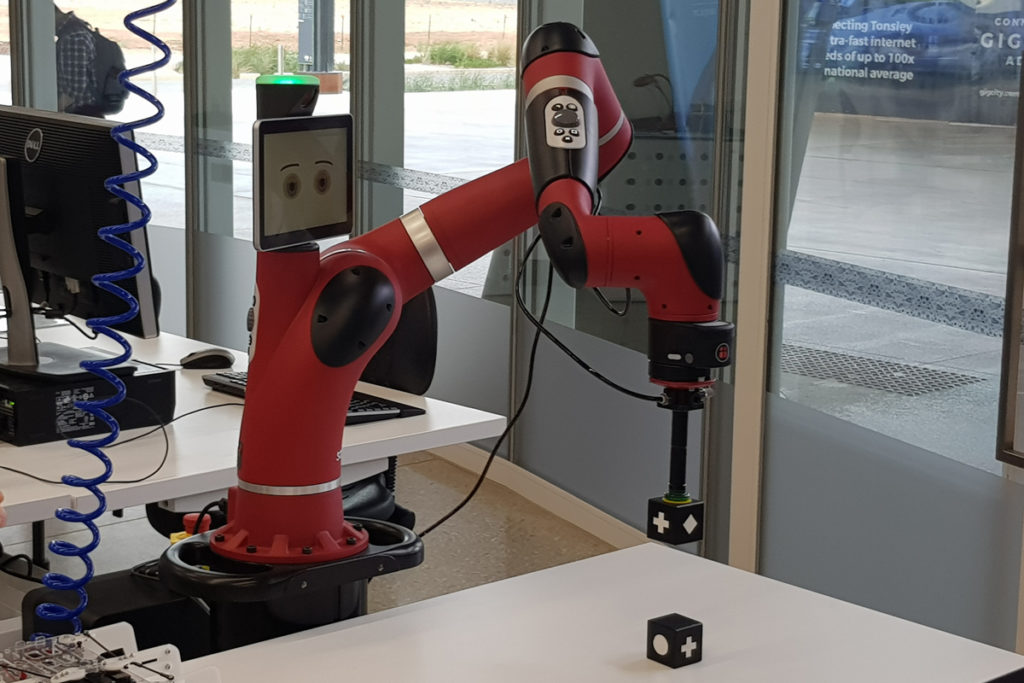 Professor Spoehr said the university’s partnership with would ensure their support in working with companies over the next five years in the new facility.

“This could come in the form of awareness raising, education and training programs, or small projects that are designed to test out ideas for the adoption of new technologies,” he said.

“This is just the beginning. We have an ambition for this new facility to become the Australian showcase of advanced manufacturing and digital technologies … a one stop shop here at Tonsley.”

South Australian Manufacturing and Innovation Minister Kyam Maher said it was important to ensure the advanced manufacturing workforce and companies had the ability to compete globally in niche markets as the economy transitioned.

“Industry 4.0 is the next technological wave that will create opportunities for South Australia’s advanced manufacturers to diversify into growth sectors such as defence, food and health,” he said.

“The TMI Hub will further cement Tonsley’s reputation as a global centre of excellence for industry and research collaboration, with modern facilities to train people for the jobs of the future.”

This article was originally published in The Lead South Australia.