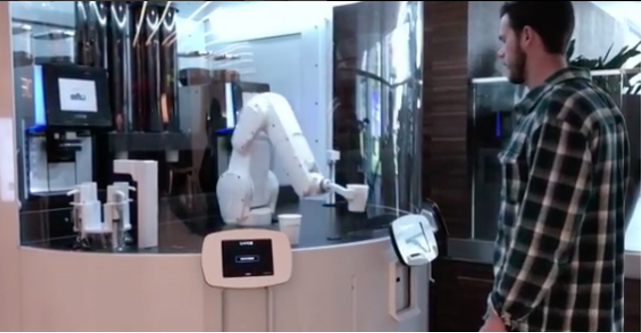 Despite the advent of simplified coffee making options such as pod-based machines, coffee enthusiasts have been able to take solace in the fact these mechanised methods will never beat a real, barista-made latte.

Forbes reports cafe startup Cafe X, which has its roots in Hong Kong, has recently opened shop in San Francisco, with the hopes of offering busy Americans espresso coffee in half the time it takes for a barista-made brew.

In what looks like a scene from Star Trek, a robotic arm behind glass moves hot cups of coffee between machine and customer. Input panels at the front of the booth allow customers to dictate and pick up their order.

Cafe X is founded by 23-year-old Henry Hu, who has had one Cafe X operation running in Hong Kong for several months. Hu told Forbes the robotic cafe’s intention is not to save money, but time.

“The reason for using a robot is that it allows people on-site to be more productive, because moving cups around a thousand times a day is not a very productive thing. It’s a very repetitive, boring thing, which is why we have a robot doing that,” Hu told Forbes.

Coffees cost between $US2.25 ($2.95) and $US2.95 ($3.87), with the beans sourced locally, and Hu believes his invention will be able to roll out up to 120 drinks per hour. Only one worker staffs the futuristic cafe, maintaining the machine and assisting and informing customers.

With only two locations operational so far, it’s probably going to be a while until robotic arms are making coffees Down Under. But if you thought baristas were exempt from robots taking their jobs, think again.