New Zealand plant-based meat startup Sunfed Meats has taken wing in Australia as it rolls out its flagship chicken-free chicken in Coles stores across the country.

Founded by Shama Sukul Lee in 2015, Sunfed strives to provide protein-rich products that are more sustainable and efficient than traditional meat products.

The chicken-free chicken is made with split yellow peas and, according to Sukul Lee, has double the protein of your average farm chook.

In November last year, Sunfed raised $9.4 million in Series A funding, a round led by Aussie VC Blackbird Ventures.

Since then, Sukul Lee tells StartupSmart they’ve been continuing a “core focus” on research and development, striving to create products that create “an actual alternative choice” for consumers.

Sunfed is working on other meat and protein alternatives, and on iterating and improving the ‘chicken’ recipe.

“They can’t keep iterating the cow or the chicken.”

However, the founder and her team have also been gearing up to their Australian launch — a moment which will be something of a turning point for the Kiwi startup.

“In Australia, we’re proving that the tech is scalable.”

“We expect that to be significantly eclipsed with our launch into Australia,” she says.

Not a niche market

The launch into Coles supermarkets in Australia is a “pretty good” win for Sunfed, Sukul Lee says. But she didn’t have to do much selling, the supermarket saw the opportunity.

“The supermarkets are smart,” she explains.

“They are the first signal where the market trends are moving.”

There was opportunity on both sides here, the founder says. While Sunfed was keen to demonstrate the scalability of its technology and take the product to a larger market, there has been a lot of demand from Australians “screaming out for the product”, Sukul Lee says. 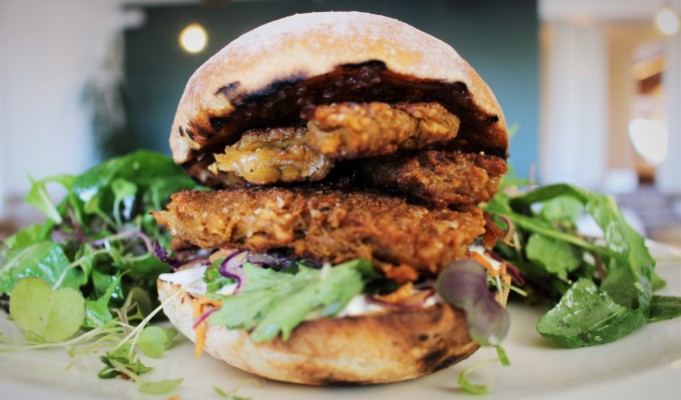 Having also launched the chicken-free chicken in the two biggest supermarkets in New Zealand, Sukul Lee was always out to get the product in front of everyday shoppers.

“We can’t be in a niche shop somewhere, because what’s the point?,” she says.

However, if a customer sees Sunfed as an option next to traditional chicken, they may well choose it.

“Until that happens, there is no progress,” Sukul Lee says.

Now, she also “of course” has her eye on entering other Aussie supermarkets.

“We want to be available to every human being everywhere … we’re not fussed on who our partner is, as long as it’s easily accessible,” she says.

Globally, there is increasing interest and activity around the plant-based meat revolution.

Also in the US, Impossible Foods raised $432.7 million in Series E funding in May, with celebrity investors including Jay-Z, Katy Perry, Serena Williams and will.i.am.

At the time, a statement from Impossible Foods said demand for its flagship Impossible Burger was increasing, and that the company had seen an “unprecedented sales surge”.

“Our supply capacity is quite big,” she says.

“But the market is massive and growing.”

The huge interest in these products in the US is indicative of that, Sukul Lee says.

A lot of these investors would traditionally invest in pure technology companies, she notes.

“All of a sudden they’re investing in food … that’s been a significant shift.

“They see the future having alternative clean protein. That’s a clear signal,” she says.

In investment terms, there are risks in the traditional animal meat system. As the global population grows, the system becomes unsustainable, “because you can’t just keep putting animals in smaller and smaller spaces”, Sukul Lee explains.

“From a risk perspective and a scalability perspective, that model is not sustainable.”

At the same time, there’s commercial demand for foods that do as little damage to the climate as possible.

“Animal proteins are the fossil fuels of the food world,” Sukul Lee says.

And for plant-based meat providers, that’s a competitive advantage.

“Consumers are craving for products that don’t exploit, that are built on strong values and that empower them with real choices so they can vote with their wallet,” she adds.

Stay true to the product

For other founders looking to launch into new markets in a big way, Sukul Lee says you shouldn’t necessarily think of it as a different market at all. Rather, just think of the consumers, and what is going to work for them.

“Regardless of the market, you’re trying to add value to the consumer in some way,” she says.

However, when you’re being truly innovative, there’s no need to get bogged down in what the consumers think they want. Often, they don’t know, Sukul Lee adds.

While you should do market research and take direction and feedback on board, “don’t get too swayed by market data”, she adds.

“If you think something is going to work for you, just do it.”

Sukul Lee and her team have been very product-focused right from the beginning, she says, investing in R&D to make sure they had a product they thought did the best job.

“We didn’t compromise on that,” she says.

“Yes, it took longer, and yes all our resources were focused on engineering and innovation, and so we didn’t really spend on marketing and advertising,” she explains.

“But, in the end we didn’t really need to, because the product worked, and it was all word-of-mouth,” she adds.

It doesn’t matter which market you’re in, Sukul Lee says. Founders should focus on staying true to their product and the people it’s for.

“Markets and consumers — those are words that ultimately describe human beings,” she says.

“You have to bring it back to that.”