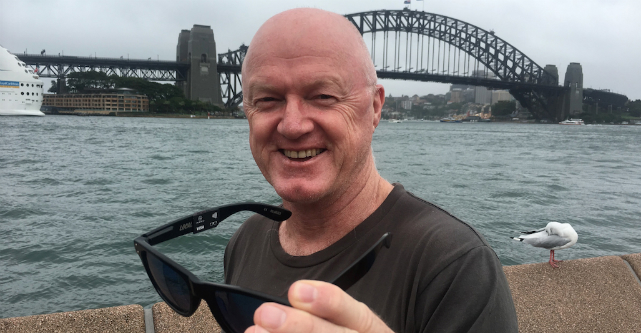 A Sydney startup that is developing wearable payment technology has found itself at the centre of global attention after Visa asked it to collaborate in the development of pay-wave sunglasses.

Inamo, a founding startup at Stone & Chalk, had just raised $1 million to launch a pay-and-go watch when Visa knocked on its door in December 2016.

“Before we even had anything out in the market, we actually [worked with Visa] and that’s pretty daunting and humbling as well,” Inamo founder Peter Colbert tells StartupSmart.

Colbert says Inamo helped develop the near field communication chip that’s attached to the glasses to make them work like a “miniature” debit or credit card.

“They gave us three weeks to pull it together,” he says.

“They just basically did an arrangement to purchase 150 sunglasses. We worked on the payments part, which is our platform, to integrate Visa.

“The chip is actually the same chip that goes into Inamo’s curl … which goes onto any sports watch, fitness band or key ring.”

Colbert has also seized the spotlight to promote Inamo’s Curl and sold 100 of these watches, worth nearly $2000, within four hours during one of the Laneway festivals, he says.

WaveShades have also made their way to South by South West is the US.

“Visa was really excited by the feedback and they went down to [South by South West in] Austin and started showing people and there was just such an enormous interest about the technology and who was behind it,” says Colbert.

Colbert is now in the Gold Coast for a Quicksilver campaign for WaveShades that Visa has sponsored.

“What’s unique about [WaveShades] is the people who win these sunglasses can go and use them straight away,” says Colbert.

“Its’ very secure [because] it’s a chip, it has the same security as any debit or credit card from a bank.

“It has the same fraud protection that Visa gives its customers. If you lose your credit or debit card, Visa will repay you the balance of what’s been spent.

“[And] we have a mobile app where if for example, you lose your sunglasses or your Curl, you can go onto the app and disable it.”

Despite all the media attention and interest from big brands to produce more of these sunglasses, Colbert says he won’t be pivoting Inamo’s focus to only focus on the sunglasses in a hurry.

“We have been approached by some of the larger sunglass companies globally,” he says.

“First and foremast, we’re a payments platform — we’re not manufacturers at all — so what we need to think about is, is it really viable to have our chip embedded into the sunglasses?

“I’m not yet convinced that fashion items are a good way to go for contactless payments because they’re so personal [and easy to lose].

“What we think we’ll be doing is having a miniature collar that slips onto the right-side arm of the sunglasses.”

This is good news for a change. The spirit of innovation and startup challenging the field is alive and well in this country.