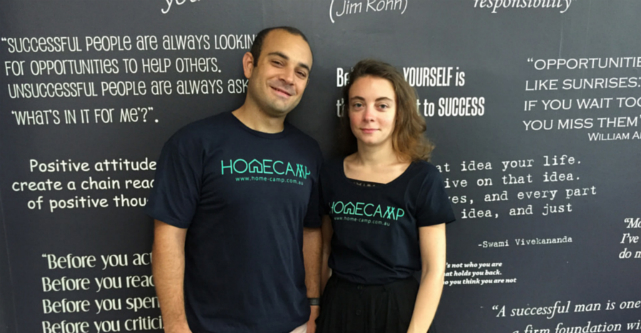 A Sydney startup pitching itself as the “Airbnb of camping” has shut down nearly two years after launching.

The startup launched in January 2015 offering a two-sided platform connecting owners of private land in Australia with campers and travellers.

Using the same model as Airbnb, these campers could then pitch up a tent or park a caravan on private property after paying a fee to the owner, with the startup taking a 20% cut.

Co-founder David Abitbol announced the startup would be shutting down immediately in an email to users on Monday evening.

“After having tested the concept in Australia we took the hard decision to shut down as our revenue doesn’t cover our costs yet,” Abitbol says in the email.

“For the last four months we’ve desperately tried to find solutions to keep the business alive. We have now run out of time and money to keep operating business as usual.”

Abitbol founded the startup after travelling around Australia for a year with co-founder Audrey Krukoff.

The startup received $50,000 in seed funding from a range of French investors along with a $40,000 investment as part of Perth accelerator program Vocus Upstart.

The startup continually raised the ire of local lawmakers with its platform, a common problem faced by many disruptive startups like Uber and Airbnb.

In the email, Abitbol attributes some of the startup’s demise to its battles with local councils, which threatened to fine landowners that use the platform.

“Council regulations discourage lots of potential hosts to list their place,” he says.

“Investors hate businesses that are not fully compliant with the law.”

The email also says that competitors like Airbnb offer a more appealing proposition for the landowners.

“We realised that potential new hosts would rather take the option to build a granny flat or something like a chalet and rent it on Airbnb than welcoming campers on their lands,” Abitbol says.

“At some point it’s legal and it provides a better return on investment.”

The startup also struggled with insurance issues and was unable to find a product to cover its offering.

“That point also strongly prevents people from listing their place,” the email reads.

“They want their property to be fully covered which is completely understandable.”

Abitbol sais the startup also struggled to find the right balance for its fees, with a need to offering a rate cheaper than camp grounds but one that is beneficial for landowners and that can support running the business.

“It has become difficult to bring significant revenue to our hosts as well as for [it] to be profitable,” Abitbol says.

“Twenty percent of a tiny transaction is not enough money to pay [our] operations such as the website, the wages, office space and so on.”

Abitbol concludes the email by referencing his overall aims with the shut-down startup.

“We launched out of passion for on-demand travel technology, great camping experiences and even greater services,” he says.

“We launched out of a genuine belief that we could make your camping journey better.”