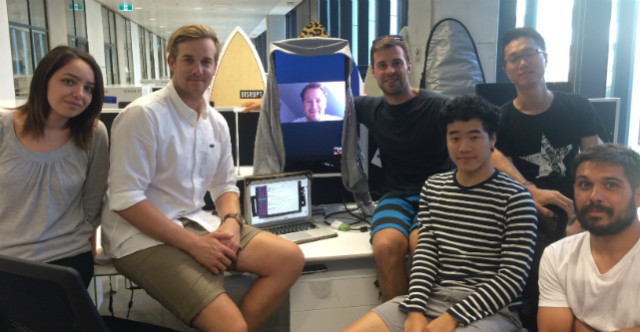 The Australian startup that had its co-founder deported for lying about picking fruit for three months is the first company to receive a spot in one of the Turnbull government’s lucrative global landing pads.

DisruptSports.com (rebranded from just Disrupt) has received a 90-day spot in the RocketSpace accelerator in San Francisco as part of the $11.2 million landing pad program, co-founder Gary Elphick says.

The company’s COO Chris Bailey was deported in March after he lied on visa forms about having completed three months of regional work in order to extend his holiday visa.

At the time, Elphick said the startup, which is turning over more than 1 million annually, would be forced to entirely relocated its operations out of Australia, and has already been offered assistance from multiple countries.

But now the government has changed its tune on the startup, offering it a spot in the “startup’s paradise” in San Francisco and a wealth of assistance and services.

Elphick says he’s grateful for the big opportunity, but still hopes the government will address the immigration issues.

“As much as I gripe at the government about immigration, they’ve been really agile and fast-moving to help us on this,” Elphick tells StartupSmart.

“But the irony really comes from the fact they won’t let Chris come into the country but they’re going to fund him to be in the US.

“It’s fantastic for us and we’re very thankful but it kind of feels like they know there’s an issue. We’d love for them to fix things for people here first.”

He says Bailey will likely relocate to the landing pad in the US, along with other team members.

“It’s a really, really good opportunity for us,” Elphick says.

“We’ll use this to move Chris there, on-board some local manufacturers, expand channel partners and grow the business.”

Paperwork is still being finalised, and the Sydney entrepreneur says it is now up to the startup to decide when it wants to start the 90-day program.

“We want to hit the ground with a plan,” Elphick says.

“Things move at a much faster pace over there. There’s a lot of manufacturing and they’re all a lot hungrier. It’s a much bigger market.”

Working with startups, not against them

DisruptSports.com applied for the landing pad program three months ago, well before Bailey was deported by the Australian government.

Elphick says he was heartened by the government’s approach to the application process.

“We love the fact the government acted like a startup,” he says.

“They had an MVP – it was a Google form with basic questions on it and they listened to feedback. It feels like the government is now working hand in hand with startups rather than for or against them.”

At the conclusion of the program, Elphick says the Aussie startup will establish a US presence either in Los Angeles or San Francisco.

DisruptSports.com has enjoyed rapid growth in recent months, with the company beginning to make sales in the US and UK, and will be opening a retail installation in Bondi in the coming weeks.

It has also expanded its Sydney team to 14 people, with four new engineers coming on board.

Despite the big chance to enter the US market, Elphick says he still wants the company to keep its headquarters in Australia, dependent on Bailey’s visa problems.

“We want Sydney to be our home,” he says.

“It’s where we started and it’s where the team is based. We really do want to keep the company in Australia and pay our tax here.

“But the one thing holding it up is Chris not being able to enter the country. We don’t want to put the headquarters somewhere else and pay tax there, but it all relies on that.”

The landing pads are supported by $11.2 million in government funding over three years, and the San Francisco location is the first to officially open.

The startups accepted into the San Francisco landing pad will receive desk space for 90 days, as well as the opportunity to work alongside “some of the best startup enterprises in the world” and the full suite of services offered by RocketSpace.

Before leaving, the startups will also consult with government representatives to identify goals, insights into the local market and advice on costs and how to maximise their time in the city.

While in San Francisco, the entrepreneurs will also receive assist from an appointed business development manager in the space.

At the conclusion of the 90-day program, a debrief will be held to “determine next steps” and how the government can assist the startup in the future.

The selection process was based on the startups’ vision, scalability, traction, differentiation and market relevance, and the centred on five key questions:

While the work space and mentoring is paid for by the government, participants will have to cover their own travel, accommodation and insurance and – perhaps most importantly for Disrupt – ensure they obtain the appropriate visa for the market.