Founded in 2014 by Jack Bowcott and Arash Karimzadeh, Tipi provides hardware and software for hostels to streamline check-in, offering a fully automated service for travellers.

However, speaking to StartupSmart, Bowcott admits the tech wasn’t always quite so sophisticated.

The first iteration was “a social network for travellers”, he says, allowing people to meet up and share travel tips and stories.

“It was fairly gratuitous,” he says.

“It was a bit like a Tinder for travellers.”

But it was difficult to drive much organic growth when people only used the platform while they were abroad, Bowcott explains.

So, the founders shifted their focus to “a problem that guests had every day: check-in”.

The second iteration of Tipi used an airline-style digital check-in pass. However, guests still had to queue to pay and pick up their room keys.

“The only way to really solve the problem was to build a whole key ecosystem,” Bowcott says.

Now, Tipi allows users to check-in and receive a digital key. For hostels, Tipi’s hardware means the solution can be retrofitted to existing locks.

While the co-founders have secured a small amount of seed funding, for the most part, they have self-funded the startup.

Bowcott himself oversees design and sales, while Karimzadeh is chief technology officer. 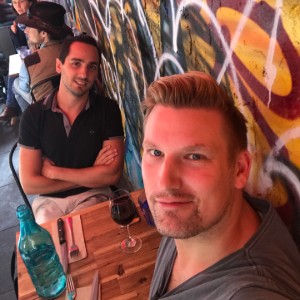 However, now they have validated the solution, they will use the investment to refine the product and roll it out more widely.

The current iteration is “a bit clunky”, he adds.

Already, the founders are working with a design agency to improve the hardware, and building out a team to work on the software.

“Quite a lot of the investment at the moment is going into building,” Bowcott explains.

“We’ve got a lot of new stuff coming.”

Once the solution is perfected, the founders will focus on scaling.

Currently, Tipi is live in 28 locations in Australia and New Zealand, but it’s seeing demand from many more.

“Lots of people want it and we haven’t been able to give it to them without having some resources to trial it,” Bowcott says.

“We want to globally scale the solution.

“For a company in Sydney just to go and sign up a hostel group in London or Asia or the States is very difficult without having some money to put into it.”

It was the right time for Tipi to be seeking investment, but Hostelworld wasn’t the only backer interested.

At about the same time the founders started communicating with Hostelworld, they had interest from a VC firm specialising in hardware, and even offers of acquisition from companies in the hospitality-tech space.

But Hostelworld’s interest was “exciting for us”, Bowcott says.

“Being a hostel-focused business is quite rare … and Hostelworld is probably the biggest brand in hostels and tech.”

Having Hostelworld reach out and express an interest in Tipi “was a bit of a compliment”, Bowcott adds. And as discussions played out, both parties realised there were synergies between the two businesses.

“They’re trying to diversify from being an online travel agent,” the co-founder explains, looking more into innovative technology in the market.

For Tipi, the investment brings credibility. The startup is aiming to get 1,500 hostels on board in the next few months, including big groups and high-quality independents, Bowcott explains.

With Hostelworld behind them, “we’ve got a much better chance of getting those hostels across the line”, he says.

“We’re already getting a lot of enquiries from the major groups, and that’s really what we’re going after.”

Having been through a few iterations of Tipi over the past five years or so, Bowcott says the most pertinent thing he has learnt is the importance of solving a problem.

“For us, the turning point was the hardware, because there was a tangible value for that,” he explains.

They produced a product that had real benefits and led to actual operational efficiencies.

“I didn’t take this advice myself when I started, but you really have to actually properly solve a problem before an investor is really going to look at you,” he explains.

Although the Tipi founders thought they had solved a problem, actually, there were crucial steps they were missing. It was only when they had a full end-to-end solution that investors started to come knocking.

“All founders think what they’re doing is solving a problem. They’re not necessarily. It takes a bit of time.”

NOW READ: Travel buddies and savvy boating: Six of the most interesting travel and tourism startups to come out of Slingshot’s Horizon accelerator