“The next meditation”: Unyoked takes its off-grid cabins into New Zealand and Tasmania

After 12 months searching in the wilderness for the perfect sites and preparing for launch, Australian nature company Unyoked has launched its first sites in New Zealand as it continues its mission to help more people immerse themselves in the outdoors.

The Sydney-born company, founded by twin brothers Chris and Cam Grant in 2016, has also expanded into Tasmania for the first time, with two sites located three-and-a-half hours north of Hobart in Winnaleah to be the company’s first “further afield” locations.

Unyoked offers short-term, off-the-grid stays in tiny houses, or cabins, in close to 50 remote and picturesque locations down Australia’s east coast, but the company doesn’t see itself as just an accommodation provider.

Rather, it seeks to offer ‘nature-as-a-service’ or “wilderness on demand”, allowing people to easily and frequently access the benefits of spending uninterrupted time in nature, as they would a wellbeing app on their phone.

“We kind of see nature as the next meditation,” the founders told SmartCompany.

It’s a vision that others share too; Unyoked has raised a total of $10 million in venture capital to date, including a $6 million round completed in November 2021. That round was led by GCI’s Leap Capital Fund and included reinvestment from existing shareholders too.

When McConaughey comes a-knockin’: How Aussie startup Unyoked got an A-lister on board (even after ignoring his calls)

In its six years of operating, close to 10,000 nights have been booked at Unyoked cabins and the brand has even launched its own record label and published a writer’s anthology.

Among its high-profile collaborators is Hollywood actor Matthew McConaughey, who came on board as via a ‘creative partnership’ at the end of 2019. At the time, Unyoked had six cabins, and was targeting annual recurring revenues of more than $25 million by 2022.

The first Unyoked sites in New Zealand are located in native bush near the Bay of Islands, in an isolated forest area on the west coast of Auckland, and near the Port Waikato coastline.

The company has been working towards a trans-Tasman launch for some time, with a local team on the ground in New Zealand during the past year, although the Grants say “the COVID-19 period made things trickier”.

No two Unyoked locations are the same, and land on which the cabins are located is a key part of the experience, explain the founders. And so it takes time to both find the right spot, and make it accessible.

“The locations need to offer an immersion in nature so you’re fully removed from aspects that might pull you back into your day-to-day, but they also still need to be accessible from it so you can tap out quickly when you most need it,” Chris and Cam said. 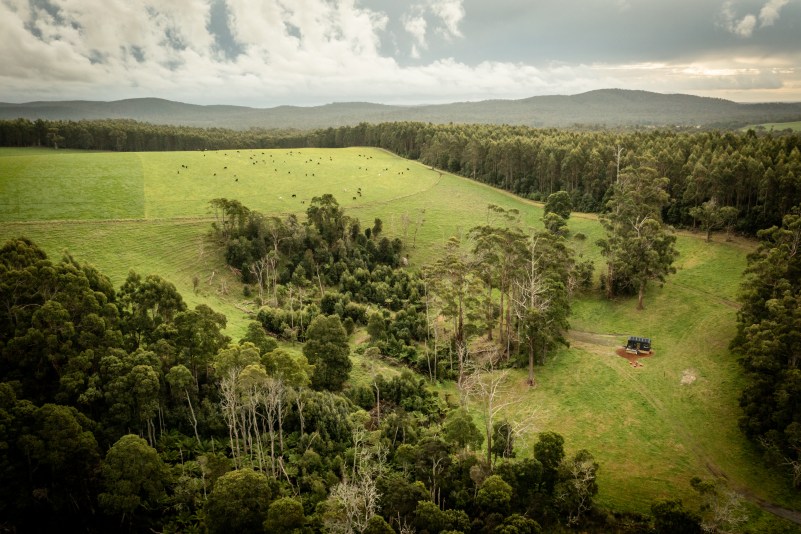 “To achieve this, we partner with private landowners and institutions to unlock wilderness in the right areas that’s not currently available to the public and help make it accessible once again.”

Venturing into cooler climates like New Zealand and Tasmania has also required some updates to the eighth-generation cabin designs.

Most Unyoked customers book two-night stays at the cabins, which, if you were staying at the ‘Bastion’ cabin in Yarram in Victoria, for example, would cost around $500. According to the founders, a two-night stay is “the most effective dose of nature to fit into people’s regular routines and one that allows you to feel the effects easily and when you need them without much planning”.

That said, some people choose to stay at an Unyoked cabin for one night for “a quick fix”, and seven-day “think weeks” are particularly popular among executives.

The isolated nature of the Unyoked locations means the business was able to maintain its high occupancy rates throughout the pandemic — occupancy has been at more than 90% since the business launched — and so there has not been a significant change in bookings since restrictions have been lifted.

However, Chris and Cam have witnessed overall growth in the market for nature-based getaways, and they believe many people are now questioning prevailing cultural norms about how and where we live.

“Having millions of people staring at their walls and asking, ‘why am I still living this way?’, seems to have had an effect,” they said. “We’re looking for a better way and some people have found it outside”.

“The trend was already happening out there but it’s accelerated 10x. Everyone’s realising how important switching off and freeing your mind is, and the role that the outdoors plays in that.”

Importantly, this is a realisation that is happening globally, not just in Australia and New Zealand, and while Chris and Cam are keeping their plans close to their chests, they are clear they “don’t see our mission ending with Australia and NZ”.

“This year’s going to be a pretty big one with some pretty epic partnerships and mew modes to access nature in even easier and more frequent ways,” they said.

Pocket money app Spriggy has successfully closed another major funding round after a $35 million Series B raise in July last year.

A pair of Aussie twins are inviting stressed office workers to get out of the city and experience the bush through their new accommodation startup Unyoked.