It’s often said you can’t truly understand someone until you’ve walked a mile in their shoes, and while the technology doesn’t exist (yet) to let you see through the eyes of another, Australian startup Equal Reality has developed the next best thing.

Founded last year by Annie Harper, Brennan Hatton and Rick Martin, Equal Reality aims to improve organisations’ diversity and inclusion training through the use of VR, literally putting users into the shoes of someone being bullied, harassed or discriminated against.

Users don the VR headset and are placed into a fully immersive experience where they take on the character of a person in the workplace who is being discriminated against — usually someone of a different race, gender or ability.

The simulation then runs through a scenario, giving users some choice as to their responses throughout. Once the scenario plays out, a different one starts, this time with the user embodying a bystander to the conflict.

Speaking to SmartCompany, Martin credits his co-founder Harper for the idea behind Equal Reality, but says he was uniquely drawn to the idea due to his own experiences with bullying in the workplace.

“I had a horrific bullying experience at one of my previous jobs in the corporate world, which was serious enough to make me depressed and anxious at the time,” Martin says.

“It was so serious I was made to sign a hush agreement so I couldn’t bring legal claims against the company, but it was horrible for me, and I’ve never forgotten the feeling of being traumatised from it.”

Martin saw Harper pitch the idea for Equal Reality, and decided to jump on board to try and prevent anyone else ever being treated the same way he was, saying his involvement with the startup was an attempt to create a “lasting legacy”.

“Stanford interaction labs have proven that VR is one of the most powerful ways to feel empathy for others and drive behavioural change, which is the entire point of diversity and inclusion strategies,” he says.

“It’s exceptionally useful and a powerful experience, and it gets you to that ‘aha!’ moment quicker than any other learning methods.” 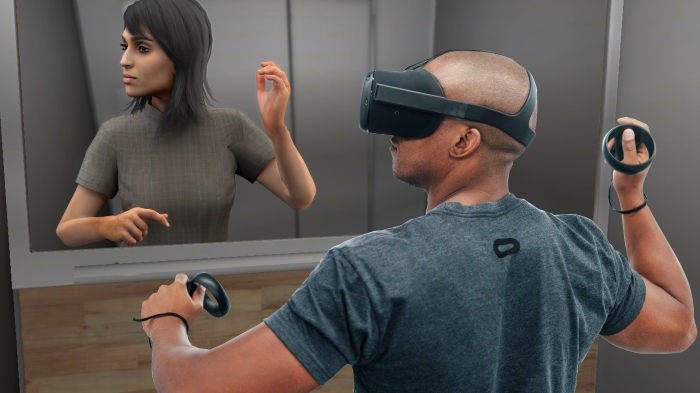 The two joined forces with former Meta VR software engineer Brennan Hatton and buckled down to create the software behind Equal Reality after running through the Remarkable disability accelerator.

Since then, the team has been off to the races, running programs with significant clients including one of Australia’s big four banks, the Australian military, and local organisations such as the Port Macquarie Council.

They recently took part in the Pitch to Investors event at Sydney-based incubator The Studio. And right now, the team is over in the US taking part in the Halcyon Incubator, which has spearheaded the company’s expansion into North America and helped them take on a large-scale diversity and inclusion firm as their first major client.

The team has also recently won the Optus Future Makers program, which has provided them with $30,000 in funding to help further the development of Equal Reality’s products.

This will include turning Equal Reality into what Martin describes as an “off-the-shelf” product, with organisations being able to purchase the company’s workshops and technology to use in their own company.

“We have this structure to help create scenarios where companies can put their own content in to create realistic human-based simulations,” he says.

“It’s a really powerful learning software, and it means we have a creative team who builds all the experiences but don’t write any code.”