What will the outcome of 2016 US election mean for the Australian business community? 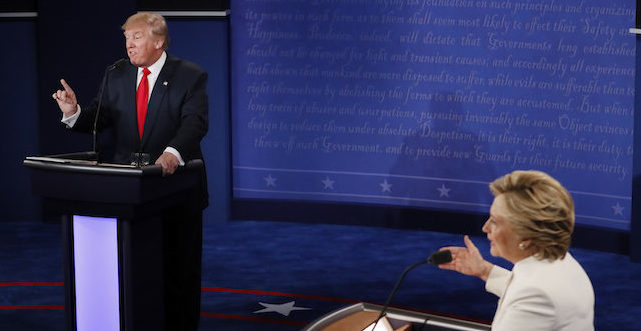 It’s the week comedians and economists have been waiting for, and if there’s one thing the Australian business community needs to worry about in the lead up to the US election, it’s the list of unknowns on the table.

Analysts are bracing for market jolts whichever way the vote goes on Tuesday – meaning Australian and global markets are in for a ride no matter what. If Donald Trump wins the race, the consensus seems to be that the local share market will face unhappy days because what we do know about Trump’s trade policies would not bode well for our trade-focused stocks.

“A Trump victory to the extent that it leads to falls in investment markets and worries about a global trade war may also increase the chance of another RBA rate cut in Australia,” AMP chief economist Shane Oliver said in a report on the stock market fallout.

“Beyond the initial reaction, share markets could then settle down,” Oliver adds.

“To be blunt, it’s unclear what Trump’s policies are going to be,” says Dun and Bradstreet economic adviser Stephen Koukoulas.

“There’s a lot of rhetorical flourishes about trade barriers, but that’s the risk – it’s more that we don’t know. He’s said many different things over the past few months.”

Head of treasury at OXF, Will Shepherd, agrees. “Certainly there’s the element of the unknown, and it’s the unpredictability of it,” he told SmartCompany.

“The main concern is a very close race – it could be a case of a lot of legal battles. If it’s a case of 271 electoral colleges to 268, it will take a while.”

Republican nominee Trump has engaged in rhetoric throughout the campaign about the lack of integrity in the US political system, and there are concerns about the impact of legal challenges on a close election result, which could see a delay in seeing a final outcome, and any policy measures released, for months after the polls close.

A number of analysts have a Hillary Clinton victory pegged as “more of the same” in terms of Australia’s relationship with the United States, the response of local markets and the idea that her trade policies would have less of an impact on Australian trade flows.

However, a clean sweep by the Democractic nominee wouldn’t necessarily calm markets, with several analysts suggesting a Democratic presidency with the Republicans retaining control of the House of Representatives would be better for global market stability.

“Since 1927 US total share returns have been strongest, at an average 16.7% per annum, when there has been a Democrat president and Republican control of the House, the Senate or both,” Shane Oliver says.

Over the course of the election campaign, there’s also been division in the ranks of global economists over who is best placed to ensure global stability and growth. As CommSec pointed out in a note last week, “in September, 300 economists published an open letter denouncing the policies of Hillary Clinton. In early November, 400 economists published an open letter denouncing the economic policies of Donald Trump. So clearly economists can’t agree which candidate has best policy”.

Australian Chamber of Commerce and Industry chief executive James Pearson says the opposition by both candidates to the Trans Pacific Partnership agreement is disappointing for the local business community.

“We know the TPP is not perfect but it opens up new trade and investment opportunities and reinforces US economic engagement with the Asia Pacific region that is vital to Australia’s prosperity,” Pearson says.

Analysts are preparing for ongoing knocks to business confidence in the belief that the race might go well beyond November, with the main concerns for the local market being the potential effects of Trump’s protectionist policies, which still haven’t really been fleshed out.

Saxo Bank chief economist Steen Jakosben said on video this week the world should also be considering the “social economic impact” of the vote, with more than half of the US population existing paycheque to paycheque, and how anxieties around social position have played into the entire campaign.

However, Australian politicians have been keen to highlight that the Australian-US relations are bigger than the presidency, and economists say we should be prepared to advocate for Australian business interests no matter what.

“There’s no point in saying, “what a strange and erratic person” Donald Trump is,” says Koukoulas.

“We’ve heard it from [Foreign Minister] Julie Bishop, and she’s been very diplomatic and aware. Love them or hate them, we’ve got to be careful, and we can continue to push for Australia’s interests here.