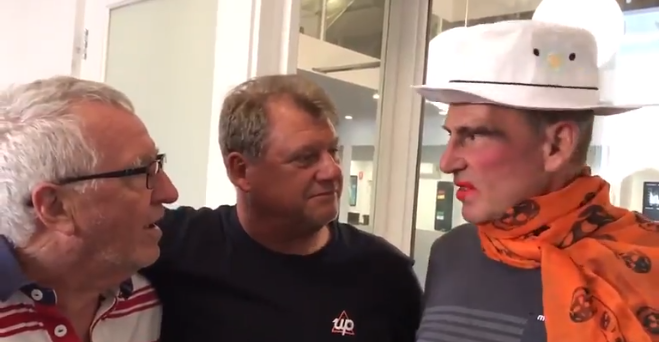 Sam Newman is a special character. This is a guy who used to host a show talking about people who play sports and who has famously referred to trans people as “it”, inferred female journalists are sexually aroused by writing about him and called non-caucasian people “monkeys”.

He has recently blessed our timelines and made headlines once again. His latest gambit is filming a social media video dressed up as a transgender woman, satirising transitioning to make a point that trans people should be banned from playing sports.

I could dedicate an entire column to his particularly offensive commentary and his persistent attacks on transgender people. But that’s not the real problem here. We know his trolling like the back of our collective hands. It’s been widely documented. It’s unsurprising.

What was surprising is the video also featured Grant ‘Thomo’ Thomas, former coach of a sports team, and current co-founder of digital payments and fintech startup Up. Grant felt free to laugh along with Sam as he mocked transgender people, and then take to Twitter to defend the video and stand by its “message”: the tired and worn-out trope that men are transitioning to compete as women in order to win at sports.

The argument itself has been debunked many times. There are no numbers out there to indicate there is any truth to the idea men are faking being transgender in order to compete professionally. As a recent Twitter thread pointed out, since the IOC allowed transgender athletes to compete, there hasn’t even been one athlete.

There are simply no instances of this strawman being proven. In the cases where conspiracy theorists have posited that successful women in sports are secretly men who have transitioned, it is safe to say the idea is libellous at worst and ludicrous at best.

Talk to some who has transitioned. Ask them if they think anyone would endure this tortuous physical and emotional process and attendant public humiliation specifically to gain a competitive advantage in lowly-paid women’s sport. Then speak. https://t.co/H0suHSKajP

It’s a talking point for one simple reason. It’s a way to argue against the inclusion of trans people, and by doing so, to argue for the othering of trans people, using an unproven and biased argument with no basis in fact. It’s a talking point that has been echoed by transphobic Twitter trolls and bigots alike, and to see it echoed and defended by the founder of one of Australia’s leading neobanks is incredibly disheartening.

And I now have a choice to make. Can I, as a transgender woman, continue to, or should I continue to, use a product whose founder expresses and echoes problematic anti-transgender talking points and appears in an offensive video openly vilifying my community? Can I reach a point at which I am able to separate what the founder is building from what the founder believes?

Even if I can, why should I?

We are going to have to consider this more and more, this question of where we see a distinction between a startup and its founders, where we can see and allow a separation and where we must accept that the entities are connected enough that one cannot be unblemished by the other’s offensive behaviour.

Up as a company initially issued a tweet to highlight that their views are not the same as Grant’s. Unfortunately, a corporate entity cannot have a ‘view’ and their perspective is only expressed through the words and actions of their founders and their chief executives. Even if we were to accept that a corporate entity could have a shared perspective on transgender rights, we’d then have to question whether a tweet is enough to make reparations for a problematic piece of commentary and a disgusting video, or whether actions would speak louder than a 280-character-maximum message.

“We are extremely proud of our diverse and passionate supporters. We would like to unreservedly apologise for any perceived association to Up. Up does not and will not condone any behaviour that compromises individuals or groups. We’re sorry. We know we can’t fix this with a single Tweet.

The team is really gutted – it does not at all reflect who we are or the values of Up. The entire Up team met this morning and had a heartfelt discussion. We agreed to take some time to capture what we stand for and share that publicly in the near future.

We are aware of the struggles the LGBTQ+ community faces daily. Up is fully supportive of any efforts to make a positive contribution to diversity and inclusion.”

Why their second attempt at an apology falls as short as the first comes down to two points. They’ve only apologised for any “perceived association to Up”. There is no perceived association when it comes from a co-founder. There’s a very real association, and there’s no apology here for what that co-founder has done and said. Additionally, their apology doesn’t actually recognise the transgender community, who are the ones attacked and hurt by this, and it’s an apology that, to the best of my knowledge, has not been made personally to the transgender people who have used and supported this platform.

Up has spoken a great deal about starting a movement in banking, and about their community. They’ve shared merchandise and swag and they’ve been publicly clear about putting people first. But none of that means a great deal if, in the background, they allow themselves and by extension their culture to be driven by a co-founder who thinks people like myself are Other and Less Than.

I’ll be shifting away from using Up if there is no concrete action taken around their founder’s viewpoints. And I think we all have to ask what standards we walk past when it comes to founders behaviour and viewpoints. Because in the words of Captain Picard: “The line must be drawn here! This far, and no further!”

NOW READ: What it’s like being a trans woman in Australia’s startup ecosystem

I refuse to eat Chik-Fil-A here in the US because of their CEO’s religious associations and views/comments on LGBT issues. Many others share my same belief. There are some who say they don’t care that the CEO wants to strip away our rights, they’ll give him money. It’s a personal decision when it comes to supporting companies like this. I recently applied to a job at a very well known (here in the US) hobby shop with religious affiliations, as they do state they are an Equal Opportunity Employer, which I very highly doubt. In any case, I wouldn’t take the job, but would be interesting to see how an interview might go 😉 So yeah, make your own decisions, just know that likely we as LGBT people won’t make financial differences to those in charge. But if you makes you feel better to not promote those people, then by all means, don’t support them 🙂