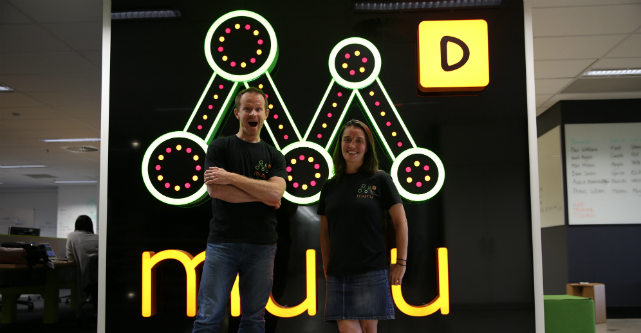 When muru-D co-founder Annie Parker was at the first mentor night for the accelerator’s latest intake earlier this year, she came to an important realisation: She wasn’t needed anymore.

Far from being a sobering realisation, it was recognition that she was getting closer to achieving her overarching aim for the startup organisation.

“There were so many people in the room that understood how to interact with the founders and what they could contribute,” Parker tells StartupSmart.

“This is fabulous. It’s what we’re trying to build: a sustainable ecosystem with many people contributing in a meaningful way, not just [co-founder] Mick [Luibinskas] and I.

More than just an accelerator

The journey started in 2013 when Telstra launched the startup accelerator, which invests $40,000 in exchange for 4% equity in each startup that passes through its doors.

After launching in Sydney, the program is now running in Singapore and Brisbane through a partnering organisation and has an illustrious and ever-growing list of international partners and alumni.

The organisation has much lofty ambitions than to be just an accelerator getting on board with potentially lucrative early-stage tech companies; it wants to create a global network of experienced entrepreneurs that pay-it-forward to breed the next generation of startup founders.

“The ultimate concept is for other entrepreneurs to pay knowledge forward to the next generations so they can learn from our mistakes,” Parker says.

“I’ve done 16 run-throughs of accelerator programs and I’ve made a ton of mistakes. I want to share that so they don’t make the same mistakes as I did.

“The whole purpose of what we do is to encourage others to share knowledge.”

Muru-D has now seen 44 startups pass through its six-month program which includes access to office space, its global network of mentors, investors and corporates, a range of perks and services, weekly workshops and overseas trade trips.

“There’s about 120 entrepreneurs that we’ve helped to educate and influence,” she says.

“The value of the alumni will come as time goes by. The group of entrepreneurs will become future mentors and investors. It’s all about sustainability.

“It won’t take long before we get to that point. Through the alumni along and our mentor and advisory network we will become a self-sustaining program.”

Australia has never had more startup accelerators vying for the country’s best and brightest entrepreneurs, and Parker says this needs to be seen as a good thing by those running the programs.

“There’s so much choice out there for startups now and that’s fantastic to see,” she says.

“There’s more choice for founders and that’s better for them, and that keeps us on our toes too. We have to be constantly iterating and improving our program.

“A bit of healthy competition never hurt anyone.”

Muru-d now has partnerships with the likes of 500 Startups, HAX, an accelerator in China and the Icehouse, and Parker says it’s this global network that sets the program apart from the pack.

“The first thing we can offer that many others may struggle with is a global network,” she says.

“We have the ability to leverage connections in key networks and also have corporate partnerships too. The ability to tap into Telstra’s network is a huge asset.”

One of the main things that Parker and her team want to instill in the budding entrepreneurs is a culture of thinking globally and taking on the world, with the program involving several international trips to hubs like Silicon Valley.

Parker has just returned from a trip to the Valley with the Sydney program’s current cohort, and says nothing compares to the actual experience of being immersed in a new and different ecosystem.

“We want our startups to think global from day one and we just couldn’t think of a better way to express what it’s like to be a global business than to take them to a large-scale market,” she says.

“There’s just no replacement for seeing other ecosystems for yourself and hearing from the horse’s mouth about VCs, angels, entrepreneurs and what it’s like doing business in these markets.

“We could just put it into a PowerPoint but the real learning comes from living and breathing it.”

The group visited the offices of Atlassian, Braintree and Facebook to see what it takes to run a globally successful tech company.

“Learning from those extraordinary stories is just gold dust for entrepreneurs,” Parker says.

“Doing business in Australia is different to doing business in the US or Europe. If you don’t see that for yourselves then you’re probably going to end up making a lot of mistakes.

“If you want to be a really successful software company you have to think globally and transfer that knowledge from other entrepreneurs.”

The current muru-D cohort has now returned to Sydney and has just over a month to prepare for the final demo night, while a second intake is set to be announced in Singapore and another in the works in Brisbane.

In Sydney, the current batch is doing the most inventive things that muru-D has ever seen, including space-focused startup Quberider.

“One is currently working on an education program to put satellites into space,” Parker says.

“We’ve certainly never done that before in Australia.”

In just three years of running, muru-D’s alumni have now raised more than $8 million in external funding and hit over $5 million in revenue thanks to paying customers.

But Parker says moulding experienced and confident entrepreneurs is far more important than the money.

“At the end of the day what we care about most is building better entrepreneurs,” she says.

“I’m 100% certain that every single one of the founders behind these businesses have developed their thinking and learnt all the lessons they need so that by the end of the program the businesses that is in good shape but we’ve also significantly contributed to their education as entrepreneurs.

“Success for me would look like everyone one of those founders saying they’ve learnt something significant.”