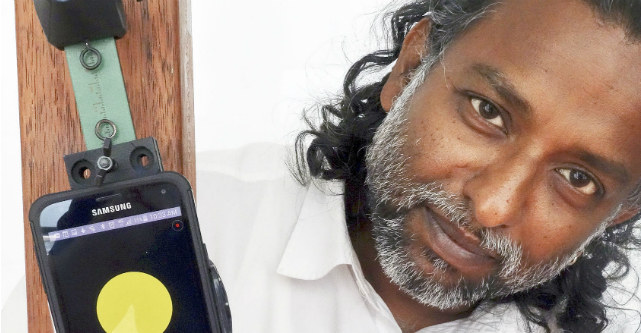 An Adelaide-based entrepreneur is working to inspire more young people to pursue futures in science, technology, engineering and maths through the development of “phones-on” learning.

PhoneLabs founder Sivam Krish has been researching better ways for students to engage with STEM subjects through a government-funded program and says there is a massive gap between classroom learning and real-world application.

In this research, Krish has found that students grasp dry concepts, formulas and laws when they are given the chance to apply these in a way that’s relevant to them.

But most classrooms today simply dictate these concepts to students, which Krish says isn’t very exciting.

“It’s really very boring because it’s highly routinised and we don’t take into consideration the learning capacity of kids,” he tells StartupSmart.

“The lab experiments that we do, they’re over 100 years old. These were structured in a time when people had to be convinced that science was true.”

Krish has developed PhoneLabs, an app that allows students to convert their phones into mini-labs, which can be used to complement or create brand new experiments.

PhoneLabs takes equations and concepts out of textbooks and gives students a chance to apply these in their own lives.

“You can put the phone on your bike to see how acceleration and vibrations happens,” Krish says.

In one class, he watched students create a whistling experiment and they used PhoneLabs’ sound app to see who could create the highest audio frequency.

Another group created a “Jack and Jill” experiment, applying the laws of physics to build a trolley system to move a pail of water, using PhoneLabs to figure out a way to make it work without the water splashing out.

“This is the best way to connect kids,” Krish says.

“It opens up student-led experiments.”

Krish is now raising $3000 to develop a 3D-printing feature to add to PhoneLabs to help with these sorts of experiments.

By allowing students to connect textbook knowledge to life experience, Krish says schools could have a fighting chance of turning around low engagement and interest levels in STEM studies.

“The point of education is to connect students to understand these laws,” he says.

With students spending most of their time on mobile devices, Krish says it’s ironic that schools restrict their use when they can be such a powerful resource to educate and inspire learning.

“These phones have far more sensory, data logging, processing and display capacity than much of the equipment currently found in school labs,” he says.

Krish says he is finding it quite a challenge to convince schools to give students the freedom to put aside traditional lab experiments and create their own, but he believes that student-led learning will be the future of education.

And tools like PhoneLabs, he says, will play an important part in this.

“I see every kid in the world using this,” Krish says.

The startup’s main focus now is to work with schools and teachers willing to give it a shot and think outside the box, he says.

“They will bring the passion to it and figure out how to incorporate it into the way they teach because every school is different.”