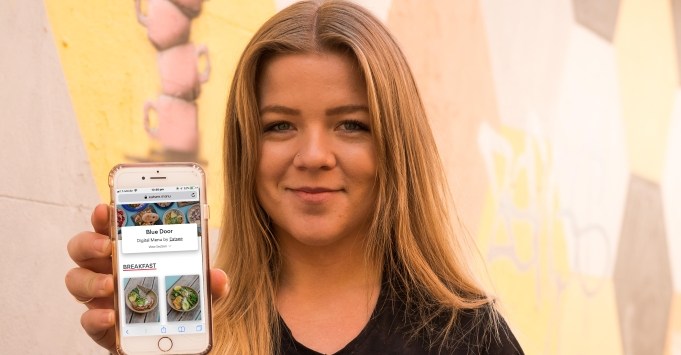 A 25-year-old entrepreneur from Newcastle has found herself in one of Silicon Valley’s most prominent accelerator programs after wowing investors with her pitch ‘Tinder for food’.

Launching this week, Eatsee is an app aiming to do away with traditional restaurant menus, allowing patrons to swipe left or right on dishes before ordering, helping venues better market themselves and their dishes through the use of plentiful imagery and QR codes.

Jessica Koncz is the founder of the startup, which she also describes as “Instagram for menus”. Eatsee is Koncz’s second business, having run a restaurant-focused social media agency for three years before launching her second venture.

“I was in that niche, working with restaurants, and I learnt a lot about social media marketing, and a lot about the challenges for restaurants who aren’t served well by any of the existing food tech platforms,” she tells StartupSmart.

Those platforms include services such as UberEats and Deliveroo, which can drive more customers to a venue, though often at the cost of high fees and a drop in foot traffic.

Koncz also runs a food-focused Instagram page with more than 50,000 followers, which she says taught her a lot about how foodies want to “discover food visually”.

“So I decided to put together all these pain points and create Eatsee,” she says.

But Koncz didn’t expect just after starting Eatsee she’d be in San Francisco gearing up to pitch her app to Silicon Valley investing heavyweights after winning a spot in angel investor Jason Calcanis’ LAUNCH Accelerator.

“It was a pinch-yourself moment. I got an email from my advisor Justin Hales with a link to the application for LAUNCH in Sydney, with the winner getting $100,000 and 12 weeks in the accelerator program,” she says.

“I thought it was insane to apply, but I did anyway because if I did win it would change my life.”

Koncz is currently in San Francisco readying herself to meet investors and has $100,000 in the bank from Calcanis. Unlike other accelerator programs, Koncz says LAUNCH is largely focused on helping founders pitch to investors, something she says she “cannot wait” to do.

‘Beating the humility out of myself’

Eatsee is hoping to close a $2 million seed round, which will give the app enough runway to expand through the US and Australia over the next 18 months.

Raising money in the Valley is different to raising money back home, however, and founders have told StartupSmart time and time again the typical humble Australian founder will likely be lost among the big personalities and bigger visions of their American counterparts.

Koncz says she’s prepared for this, having received advice American VCs are only looking for “unicorn-sized” companies and is prepared to pitch hers as one.

“You have to take whatever your current goal is, and multiply it by 10. You also have to be super forward-thinking about how big your company can get, and then sell them on that vision,” she says.

“We have much more of a humble culture in Australia, so I’ve had to beat some humility out of myself.”

As an example of this full-scale thinking, Koncz compares her app to the likes of Yelp, a near billion-dollar company, believing Eatsee has the potential to scale to the same size as the reviews giant.

Her company makes its money through a $200-1000 onboarding fee, which includes a photoshoot of all the restaurant’s items. After that, Eatsee adopts a SaaS-like pricing model, charging a monthly fee of $99. Through that, businesses also get access to monthly analytics and private reviews from customers providing feedback.

“My goal is to expand globally, and we’re really looking to ramp up our team in the US and Australia,” she says.

“I’ve done a lot of market research, and no one’s doing the same platform as us. Every other food platform is focused on delivery, and we’re trying to do the polar opposite.”

NOW READ: Shark Tank recap: “Tinder for Tennis” app nets deal with Glen Richards but it wasn’t meant to be