A few months after a chance meeting at Google’s Creative Labs in 2016, animator Deborah Ho received a call from neuroscientist Annabel Blake with a simple proposal.

“She called me up one day with an idea for a STEM-focused storytelling game for young girls. She said it would be super simple, we’d print it locally, and it’d take us about three months,” Ho tells StartupSmart.

However, as is common in the world of business, things didn’t go exactly to plan.

“Unfortunately, we drastically underestimated how long it would take and how perfectionist we both are,” laughs Blake.

“So it ended up being a lot bigger and more exciting than we initially thought.”

Those three months stretched into two years of work, and resulted in the creation of Talu Tales, a storytelling game aimed at parents and kids alike, and designed to aid the co-creation of exciting stories.

Inspired by similar storytelling and role-playing games such a Dungeons and Dragons, Talu Tales also features a STEM twist, with the goal of getting more young girls interested in science and technology.

“Around the time we started development I was babysitting for some friends, and one of the kids asked me to tell them a story,” Ho says.

“Now, any parent will know how difficult it is to make up a good story on the spot, and you’ll usually end up looking around for inspiration and start telling a story about the fridge,” she explains.

“This is something that can help parents create stories with their kids, with different characters and settings, all rooted in STEM concepts.”

Talu Tales’ first story pack (called Space, Spaghetti and Aliens) will be released on July 11, and is appropriately space themed. The game includes 21 jumbo-sized game cards, each illustrated by Ho. 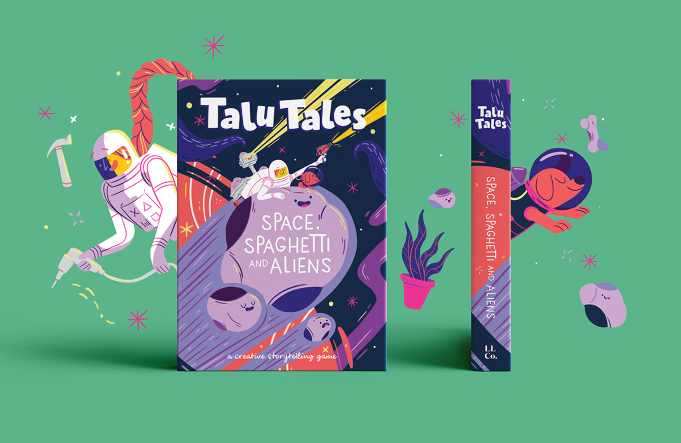 But, the stories won’t stop there. The two founders are already planning additional expansions to the Talu Tales universe, including stories set in ancient Egypt and underwater. The expansions will be linked to the original, including the same characters and overarching storylines.

Blake and Ho have long been strong supporters of female representation in STEM. Blake says she realised there needed to be more ways to get girls thinking and speaking about STEM from an earlier age.

“I work in a neuroscience lab and for most of my professional career I’ve been in the minority, with women making up just 27% of the STEM workforce. I remember when I was younger, there weren’t many girls in sport either, and I just thought that was the way it is,” she says.

These preconceptions were manifesting in story books as well, with many books aimed at girls being about sparkly princesses and fairies. Blake says Talu Tales still keeps the sparkle, but uses it to talk about black holes instead.

“It’s wonderful to talk about science, but to bring it to kids’ levels, and let them think about it on their terms,” she says.

“Already, even when entering high school, the interest in STEM is lower for girls than it is for boys, so it’s really important we start talking about it early.”

A story of good business

Ho and Blake have established Little Literature Co as the company behind Talu Tales, and the two say this is their first ever “proper” business venture.

“I did run a startup for a while called Jetpack Beluga, because you can call startups whatever you like,” Blake says.

“It didn’t make any money, and I realised I wasn’t very good at business, but I was good at rallying around a cause.”

The two say the process of setting up Talu Tales has been a challenge, although they have regularly sought advice from friends and mentors on how to run the fledgling startup.

“One big piece of advice we got was to never do business with friends,” Ho says.

“But it’s been such a fantastic experience — how we work together and the roles we’ve taken are really natural, and we have such common passions and ideologies.”

Outside of launching new expansions for the game, Ho and Blake are looking at ways to bring a digital experience into the mix, but without relying heavily on screens.

“On a more experimental level we’re looking at tech like augmented reality, and also ways we can mix sounds and other visuals with the cards,” Blake says.