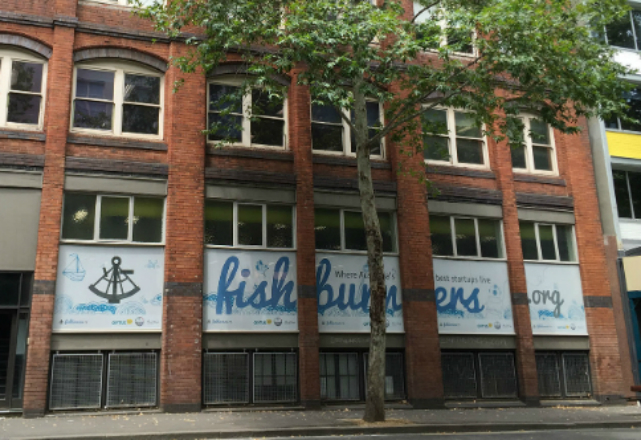 Murray Hurps had been working with startups in Sydney for more than 16 years when he was called into a meeting that would change his life.

It didn’t seem like a moment of that magnitude at the time – the entrepreneur had been added to the board of a small local co-working space called Fishburners.

But it was a move that would lead Hurps on a journey that would prove to be the most rewarding and impactful thing he has experienced to date.

“That invitation was the best thing that’s ever happened to me,” Hurps tells StartupSmart.

He quickly got a taste of working in a dynamic and productive space, and of being surrounding by young, enthusiastic and promising entrepreneurs and companies.

So when Hurps was offered the position of general manager at Fishburners in the interim while a permanent leader was found, it was a no-brainer.

“When the time came and a new general manager was needed, I raised my hand and said I’d be interim GM until we find a better one,” he says.

“That was the second best thing that ever happened to me.”

But it was always meant to be a temporary thing – he would step in to fill the void until a suitable candidate emerged, and then Hurps would return to running his own business.

But it didn’t work out that way. Two years later, Hurps is still the general manager of Fishburners.

“It’s really hard to commit to doing something this challenging for a long time,” he says.

“But once you’re in it you start to see the good things happening and you get very enthusiastic about seeing these things through and making sure they deliver. At that point you’re kind of stuck.

Fishburners opened its doors for the first time on April 1, 2011, the brainchild of entrepreneurs Mike Casey and Peter Davison.

Davison says he created the hub “just to make friends”, a way to connect with his sometimes hard to find peers.

“But I don’t believe him for a second,” Hurps says.

“He’s not willing to admit to being a forward thinker and to being ambitious.”

Named after the Fishburn, a supply ship that delivered goods to Australia in 1788, the space was opened at a time when there was virtually no entrepreneurial or startup community in Sydney, or Australia more widely.

“There was almost zero support for tech entrepreneurs who wanted to make a go of it in Australia when we started,” lifetime Fishburners board advisor Peter Bradd says.

But five years later, everything has changed – and Fishburners has played a vital role in this drastic transformation.

“It was really unusual to find a partner to work with in the city back then,” Hurps says.

“Now you can walk into a building with 300 members. That’s potentially 300 people who are all trying to start startups and are bringing expertise and networks and a combined motivation to see something good happen.”

Fishburners has rapidly grown to become by far the biggest startup hub and co-working space in Australia.

It has now been the launchpad for more than 600 startups and thousands of entrepreneurs.

Hurps says the space operates on a “portfolio theory”, and welcomes all types of companies and people.

“If enough people are aiming for the right targets, a couple will become the next Atlassian or Canva,” he says.

Just don’t ask him to name a few favourites – that’s like naming a favourite child.

“I’ve been proven wrong consistently in trying to predict who’s going to be successful. A lot of the less interesting and exciting companies are the ones that come back six months later with half a million monthly revenue.

“The number of people I’ve seen come and go and the impact I’ve felt is incredible.”

In its sixth year of existence, Fishburners will be operating a bit differently, with four spaces on its board now opened up to current community members.

“We now have a diaspora of entrepreneurial board members,” Hurps says.

“All the success of Fishburners is because of the people in Fishburners.”

These new board members include 99dresses founder Nikki Durkin and Car Next Door founder Will Davies.

These two entrepreneurs typify the impact that a space like Fishburners can have on a young founder with an idea.

“Fishburners is more than just a co-working space – it is all the tangible benefits that come from being constantly surrounded by like-minded innovators to share and learn from,” Durkin says.

“Fishburners has been absolutely instrumental in my development as an entrepreneur and I am humbled and proud to be serving on the board as we expand our reach.”

Davies agrees, saying the space played a pivot role in his startup’s growth and development.

“I moved into Fishburners to start Car Next Door alone and got to build the team from one to 18 desks without ever having to go through the hell and distraction of moving offices,” Davies says.

“The day you walk into Fishburners you have an instant network of people doing similar but non-competing things around you that you can learn from and also help.

“There is not a skill that can’t be found within the community.”

One of the most surprising and impressive aspect of Fishburners’ growth is the near-complete absence of government assistance.

Operating as a non-profit, the space relies on its corporate sponsors to survive, with the government contributing about $25,000 across the five years.

The likes of Optus, News Corp, Google and NAB are picking up the slack though.

“We’re incredibly lucky to have the support of corporates we had,” Hurps says.

“Optus was supporting us for a long time, frankly before we deserved it.

“We exist because of all our supporters.”

While admitting that Fishburners could have reached its current size and prominence much quicker if it had government support, Hurps says its absence has helped the team foster an inherently entrepreneurial spirit of independence and strength.

“We managed to find a large number of partners and we got some resilience there if we have a change in government or change in sponsors,” he says.

“We’ve never lost a sponsor but we would survive it. We’re more resilient because of that of government support.”

This resilience proved to be helpful for Hurps when faced with a “heartbreaking” problem during most of his tenure.

Nearly every day a burgeoning startup in Fishburners would ask for extra room, and every time they would be knocked back.

Fishburners had outgrown its premises and was overflowing onto the Ultimo streets. Hurps himself had long ago given up his own desk, resorting to hot-desking and working from a downstairs café.

Worrying about stunting these companies’ growth used to keep Hurps up at the night, but now he can finally say “yes” again.

Earlier this month Fishburners received the best possible birthday present when the board signed off on a new building in the heart of Sydney, one that is four times the size of its current space.

The two-year, heartbreaking search had come to an end.

“I might end up with a desk now,” Hurps says.

“I’ve put in an application, but I’d never choose a desk for myself over a desk for an exciting entrepreneur.”

The passionate entrepreneur will now finally be able to return to doing what he loves instead of dealing with real estate.

“I’ve got a tech background – I started when I was seven years old coding to entertain myself,” Hurps says.

“Then I was running companies and now I’m running Fishburners. The thing I’m looking forward to the most is not dealing with real estate – that’s not something that’s enjoyable for any party involved.

“I’ll be focusing 100% back on creating startups rather than solving real estate problems. We’ll be dedicating all our team’s knowledge and firepower to getting everyone excited and enabling te next big thing.”

Fishburners also recently announced its first major national expansion, with the group set to be an anchor tenant in a new $5 million innovation hub in the centre of Brisbane.

While reminiscing on the five years of Fishburners, Hurps is always eager to look forward instead.

It’s been a rapid and exhilarating rise, but it’s all just beginning.

“Just imagined walking through the doors and seeing 600-plus desks filled with startups, filled with accelerators, filled with these companies driving what could be the next economic boom for Australia,” Hurps says.

“It’s going to be amazing – I can’t wait to get started.”