Tracie Thompson is an information security expert. She knows the dangers, and she’s built a startup focused on protecting organisations from falling into malicious Wi-Fi traps.

Together, she and her co-founder and husband Mike sold their previous security consulting business of 17 years and started HackHunter to tackle the new and pressing issues presented by the Internet of Things.

Their goal is to create something that can scale exponentially, making a bigger impact on the industry, their employees, and their own work satisfaction.

“HackHunter protects organisations from information theft by malicious Wi-Fi. We conceived of the idea in 2017 and began the company in 2018,” HackHunter co-founder Tracie Thompson tells Duct Tape.

“The core product is an Internet of Things (IoT) sensor that you set up around an organisation, which detects if there’s malicious Wi-Fi around or any hacking on the Wi-Fi channel and sends real-time alerts to the security management systems.

“We also have a portable tracker, so once you know there is malicious Wi-Fi in the specific area, you can take the tracker and pinpoint exactly where it is so you can remove it.

“We’re building the hardware and the software to support it. Our target market includes corporates and government. We’re doing six proofs-of-concept at the moment, with a federal government department, a financial institution, a power utility and some large retail and tech companies.

“Our long term goal is to have our technology in all IoT devices and wireless communication channels globally, getting the manufacturers to put our technology in their devices — in laptops, phones, IoT sensors.

“We will look very different in five years time — between 80–100 employees, and a company worth over $100 million dollars.”

“I started my career as a clerk in the federal government, then went to work at British Petroleum (BP) in their finance area, but it turned out I had an aptitude for technology.

“I studied for seven years at night school for a business degree, majoring in marketing, but ended up working at BP as a business analyst, as a bridge between the business and technology areas.

Prior to this, Mike (who is my co-founder and husband) and I had a small business that we ran for 17 years in information security consulting and software.

“After we sold the business, we did some consulting work while thinking of what to do next. We had been in the information security industry for a long time, and it’s growing, so it was natural to stay there.

“Mike is an IT security expert with an interest in IoT, so we were looking for a way to mix those two interests together.

“We were very lucky because we had some money behind us from the sale and were also bringing in some cash through the consulting work. But we knew that we wanted to do something bigger than what we’d done in the previous business.

“Mike is a brilliant inventor and being super creative he has lots of ideas. I’m the absolute opposite — I’m the implementer. He would come to me with ideas and I’d say: ‘No one is going to buy that. We’re not going to do that because it doesn’t solve a problem anyone has.’ Then he had the idea for HackHunter and I said: ‘Hmmm, this is going to go places.’

“We had grown organically with the first business and we knew we didn’t want to do that again, it’s just a hard slog. We wanted to grow something bigger this time around and engage with venture capital. We wanted to build something that grew exponentially, that wasn’t constrained like our previous business had been.

“We believe we can build a big business. It’s possible to do if you have the right people and the right resources and the right product, but we didn’t have that with the previous business and it was just frustrating and boring.

“We had bigger ambitions and wanted to prove that we can do it — not for the money at all. It’s about growing something big, to see how far you can push the boundaries. To see what you can achieve. To challenge yourself personally, but also to contribute to society in a positive way.

“For example, we had a few employees in our previous business and I remember thinking to myself at one point, wow, this business is supporting seven families, that’s really contributing to society.

“We want to do that now, but on a much bigger scale. We want to push the boundaries and see how far we can go.” 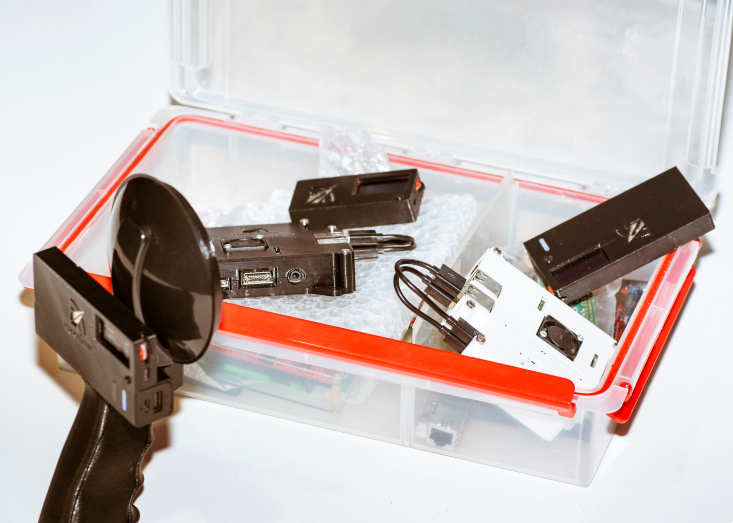 “Mike came up with the idea in November 2017 and proved it was technically possible by January 2018. We were then accepted into the accelerator program Startmate in July.

“Startmate was awesome, full-on and so much fun. It taught us how to think much bigger, without boundaries, so that nothing is holding us back except ourselves.

“We’ve had to learn not to get in our own way.

“As an older woman, I was a bit worried that I wouldn’t have anything in common with the (mainly) 28-year-old males in the cohort. That I’d had completely different life experience from them — I’ve got a house, kids, dogs, older parents.

“But none of that happened. We’re all working towards the same thing, and none of us were competing with each other. I didn’t always understand the fashion, but that’s okay.

“As soon as we finished Startmate we went straight into another six-month accelerator called CyRise, which we have just finished. It’s funded by Dimension Data, Deakin University and LaunchVic, and is specifically for cyber security startups.

“I’ve also completed a female founders accelerator called SBE Australia, part of Springboard Enterprises, which is based in the US. We now have mentors in the USA who are in cyber security, which will help when we want to expand over there.

“Doing these accelerator programs has been incredibly helpful – I think we’re 18 months ahead of where we would have been.”

“It’s hard to understand from the outside, but we’ve been really surprised by how supportive people have been in the startup community.

“In business or even school, people are often competing, trying to drag you down — even when they’re not negative, they’re not helping you.

“Whereas in the startup community, everyone has been positive and encouraging, wanting to help you.

“It’s been a shock really.

“When we were doing university and starting our careers, there was no such thing as startups or accelerators — you started a small business and off you went. So none of our friends or family understand this world. They don’t understand what we are doing or why we are doing it, or the fact that we don’t have weekends to do things anymore.

“My mother keeps asking: ‘Why are you working so hard? When are you going to sell something and make some money?’

“And I say, ‘It doesn’t work like that mum, we’re doing proof of concepts, it’ll take a while’.

“But also, I don’t think of it as work. I think of it as we’re just having the time of our lives, we’re having a ball, it’s not working when you love what you’re doing.”

This article was first published in Duct Tape, a publication by Startup Victoria and Victoria University, and has been republished with permission.

NOW READ: With 4,000 SMEs on its books and $6.7 million under its belt, recruitment startup Vervoe is using AI to build a meritocracy