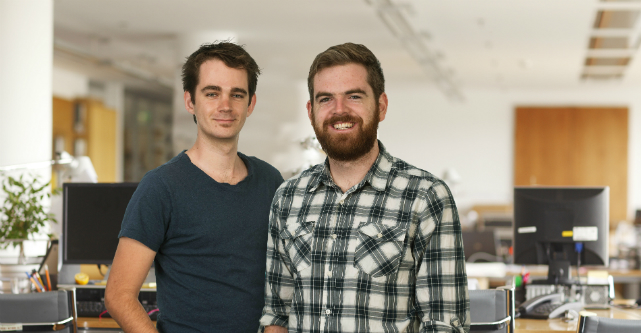 A fast-growing Canberra software startup is on the hunt for a $6 million investment round as it looks to capitalise on emerging technology trends and make a “huge impact” on the $4 billion big data global market.

Instaclustr is a software and support company offering enterprise solutions and consulting services for other tech companies founded on NoSQL database Cassandra.

Operating as a database-as-a-service company, the startup was founded in 2013 and delivers its service through cloud provider platforms.

It has a 24/7 support service operating out of its offices at the University of Canberra and also has a headquarters in Redwood City, California and sales offices in Amsterdam and Japan.

Instaclustr co-founder Ben Bromhead says that while the Cassandra platform offers unlimited scale and availability and low latency, it can be a “complex beast” to tame – and that’s where his startup comes in.

“There are some challenges and it does make it easy to shoot yourself in the foot,” Bromhead tells StartupSmart.

“We’re offering a managed service to help customers who are looking to adopt scalable and available technology, and that really de-risks that a lot.”

The startup is at the centre of three emerging tech trends, Instaclustr CEO Peter Nichol says.

“There’s the move to cloud, with companies using competing in the cloud and consuming it like a utility,” Nichol tells StartupSmart.

“The second major trend is the move towards open-sourced software, which is now at the level of maturity and robustness where large companies are essentially running their busineses on it.

“And the third major shift that we’re taking advantage of is the shift in the underlying database technology. In the age of the internet and Web 2.0, the kind of data that companies have to deal with and the amount of data has exploded quite dramatically.”

Bringing these trends together, Instaclustr provides this database technology as a fully managed cloud service, and the value to clients is “very straightforward”, Nichol says.

“They can decide to manage this database technology themselves and build up teams of experts which is very expensive and takes a lot of time,” he says.

“Or they can outsource it to us and we can do it at a fraction of the cost, and get them up and running very, very quickly. They can save money, have a faster timeframe and then focus on just developing their app and not worrying about the database.”

In terms of competition, Bromhead says that while there are a few “very early-stage” companies operating in the same space, Instaclustr has a solid head start.

“We’re really the only ones doing this at the stage where we are,” he says.

“We’re waiting to see what happens but we’re very much focused on our biggest competitor: Doing it yourself as opposed to outsourcing it to us.”

And it’s a big market if Instaclustr can emerge on top, with analyst firm 451 Research predicting the managed services market for NoSQL database technology to be worth up to $3.7 billion by 2019.

Instaclustr has raised about $4 million in seed founding across two rounds from investors including cyber-security entrepreneurs Peter Lilly and Doug Stuary, ANU Connect Ventures and the Canberra Business Development Fund.

Now the startup is looking to raise a further $6 million in the next six months to give it a runway to profitability and Nichol says that despite rumours of an IPO, the team is yet to decide which funding path to venture down.

“There have been rumours that we were looking at an IPO but that’s a bit premature,” he says.

“We need to raise money to fuel the growth of the company, but an IPO is really just one option. We’re also looking at raising money from the private VC community in Australia and the US. We haven’t really decided on that yet.”

He says the startup now has revenue in the “single-digit millions” and is growing by 300% year-on-year, and a $6 million funding round should help the company soon reach profitability.

“The revenue growth has been pretty dramatic,” Nichol says.

“This could be the last time we have to raise cash. There’s a great opportunity in a big market for an Australian company to make a huge impact.”

Taking on the world from Canberra

Despite settings its sights on the global market from day one, and 90% of its customers coming from outside the country, Nichol says he’s determined to keep the majority of Instaclustr in Australia.

“We came out of Australia and we very much intend to keep the majority of the company based in Australia,” he says.

“Our development and support is in Canberra and we see that as a strategic advantage – the people we have there are highly skilled and highly talented. They’re very skilled and a fraction of the cost of engineers in Silicon Valley.”

Of the company’s 25 employees, 20 are based in Canberra, and he says this is the way it’ll stay going into the future.

“Our goal as a company moving forward is to build out our centre of excellence in Canberra and keep support and development there, and then have people around the world in sales and marketing,” Nichol says.

That’s a really efficient way of growing the company.”

Bromhead says that while the startup community in Canberra is small, there are certain advantages to being a tech company in the city.

“We don’t have to compete with hiring in Silicon Valley and our employees have a much better quality of life – we see it as a key competitive advantage,” he says.

“It is small but at the same time you have seen good tech companies come out of Canberra. You don’t hear of it that much but there’s a lot of smart people there doing really cool stuff, and we’re just starting to see the emergence of a bit of a startup scene in Canberra.

“It’s very early-stage but some good little seeds have been planted.”

An early-stage startup itself, Bromhead says Instaclustr’s offering can be useful for other startups looking to scale at pace.

“When you first are working on an idea, choose the technology that you know in order to get to an MVP or prototype,” he says.

“Once you start to see some traction and a good product fit, then you really have to start looking at technology that can scale with you and scale with your company.