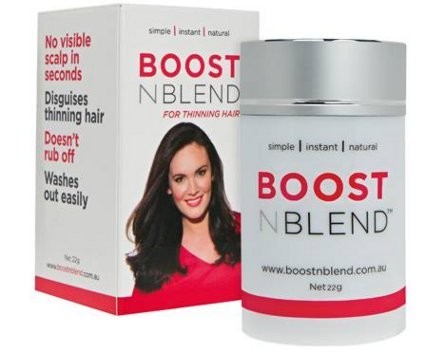 Age discrimination is a real problem in a number of industries, including startups, according to BoostnBlend founder Bambi Staveley.

Twelve months ago, 54-year-old Staveley launched BoostnBlend, a product that aims to help women add volume to thinning hair, in order to escape that discrimination.

She says it’s never too late to start your own business.

It’s an important message given workers will eventually be expected to work until they’re 70 and the results of a study, commissioned by the Department of Health and Ageing, which found age discrimination affects five out of six job seekers in Australia.

“After being affected by age discrimination myself one too many times, I came to the scary conclusion that starting my own business was the only course of action open to me if I wanted to keep working,’’ she says.

“I attended a job interview where they insisted on seeing (and photocopying) my driver’s licence, supposedly to prove I was an Australian. I knew what I was up against.

“That really was a pivotal moment for me. I was so appalled.

“I just felt I was absolutely discriminated against.”

However, when investigating her idea she found there was very little support out there for a woman over 50 who was trying to launch a product.

“My intention was to try and find an investor or a partner, or somebody who would be willing to go into this with me,’’ she says.

“I read an awful lot of applications and downloaded applications forms, but they always came back to their set of criteria, and it’s largely technical based, they’re looking for e-comm startups or a new IT idea.

“They’re looking for people who are young and I only found one organisation that is specifically aimed at women, and they were also focused on IT.

“Being a female with a product and being over 50, you seem to be pretty stuck in terms of investors.”

But Staveley wasn’t put off, and 12 months later she says her startup is growing.

“Getting into the startup world was a pretty daunting decision,’’ she says.

“Basically I’ve been winging it. It’s a daunting task when you decide to do that on your own. Take money that you’ve saved and putting it into a business.

“Since launching it in June last year, we’ve had steady double digit growth month on month.”

After she began to lose some of her hair in 2007 due to a hormone imbalance, Staveley says she looked for help, but there was none, which led to her coming up with the idea behind BoostnBlend.

“Loss of hair for a woman is really quite a devastating and heartbreaking thing,’’ she says.

“When I started to research it, I found there was basically no help out there, no product for women, no advice.

“The really amazing thing is the response I’ve had. I’ve had women emailing me, calling me, telling me how happy they are.”