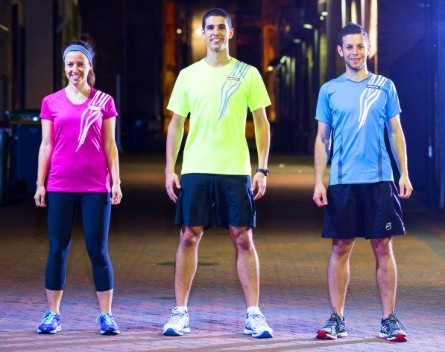 An Aussie startup is looking to make it easier and safer for people to exercise at night.

Nightro Athletic, which is based in Sydney, has combined wearable LED lights and reflective fabric with the classic T-shirt to ensure runners and cyclists can be seen while exercising at any time of the day.

Founder Ryan Savitz told StartupSmart he decided to start Nightro Athletic because his co-founder had a couple of “near misses” with oncoming traffic while training for a marathon. At the same time, he found it difficult to find high-visibility clothing that was stylish and comfortable.

“He came to me and said there’s a problem we need to solve, there’s clearly not good enough products out there,” he says.

“He didn’t want to wear those tradie vests. He didn’t like a headlamp… he found it was too bulky and wasn’t really designed for what he was going to do.”

Savitz says the idea is to make running at night safe, comfortable and fashionable. He points out that people are increasingly wearing their exercise gear during the day – whether it is to and from work or catching up with a friend on the weekend.

“That’s why the light is actually detachable,” he says.

“In the day you can wear the shirt with a nice pattern and at night that pattern becomes reflective and you can attach a light if necessary if you want extra visibility.”

Savitz says with people’s lives increasingly busy, more and more people are running at night because it is the only spare time they have to exercise. However, this presents a range of dangers – including cars, cyclists and other runners.

“Not just in Australia but around the world there’s this growing trend to run at night,” he says.

“Especially countries like Korea where they work longer hours or Singapore where it’s really hot during the day to run.”

The startup is running a Kickstarter campaign with the aim of raising $40,000 by mid-December. Savitz says the reason for turning to crowdfunding is to build awareness of the product before investing in manufacturing and approaching major retailers.

As for what the future might hold, Savitz says he and his co-founder plan to expand the product range to include leggings and shorts. The duo are also planning on incorporating more advanced wearable technology into the T-shirts to measure, among other things, people’s heart rates and track their performance.