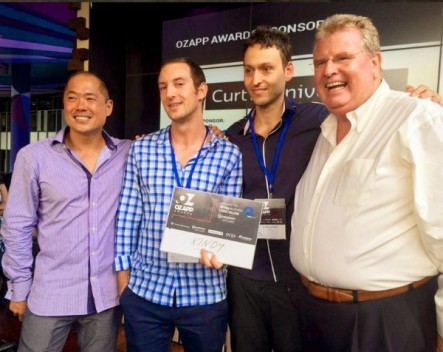 Babysitting app Kindy is hoping to leverage its win at the 2014-15 OzAPP Awards into its first external investment.

On Wednesday night at the West Tech Event in Perth, Kindy pitched at the OzAPP award final, beating four other shortlisted finalists to take out the award.

The top 20 finalists had to hold a live video pitch with senior members of the judging committee, with the top five going on to pitch at Wednesday night’s final.

First prize includes a $US100,000 convertible note from Qualcomm Ventures, but connections made during the process could prove to be just as valuable. The startup has already been approached by investors, including some that were present at the event. To date the startup has been bootstrapped by its founders. It acquired Melbourne-based startup Social Hands last month, which allows users to log into the app via Facebook.

Chief executive and co-founder Hugh Podmore says that he was shocked when the winner was announced. He says that they will use the money to invest in product development.

“It is a privilege to have won. The candidate quality was high and we thought we wouldn’t win, especially since we are still in the early stages of our startup,” he says.

“We want to differentiate our app further by including an in-payment function, hosting video profiles of carers and allowing users to see which babysitters their Facebook friends have hired in the past. We will be conducting marketing awareness campaigns too.”

He hopes to expand to overseas markets after getting a foothold in the industry in Australia.

“Establishing a revenue model will happen once our product consolidates its position with users in the market,” he says.